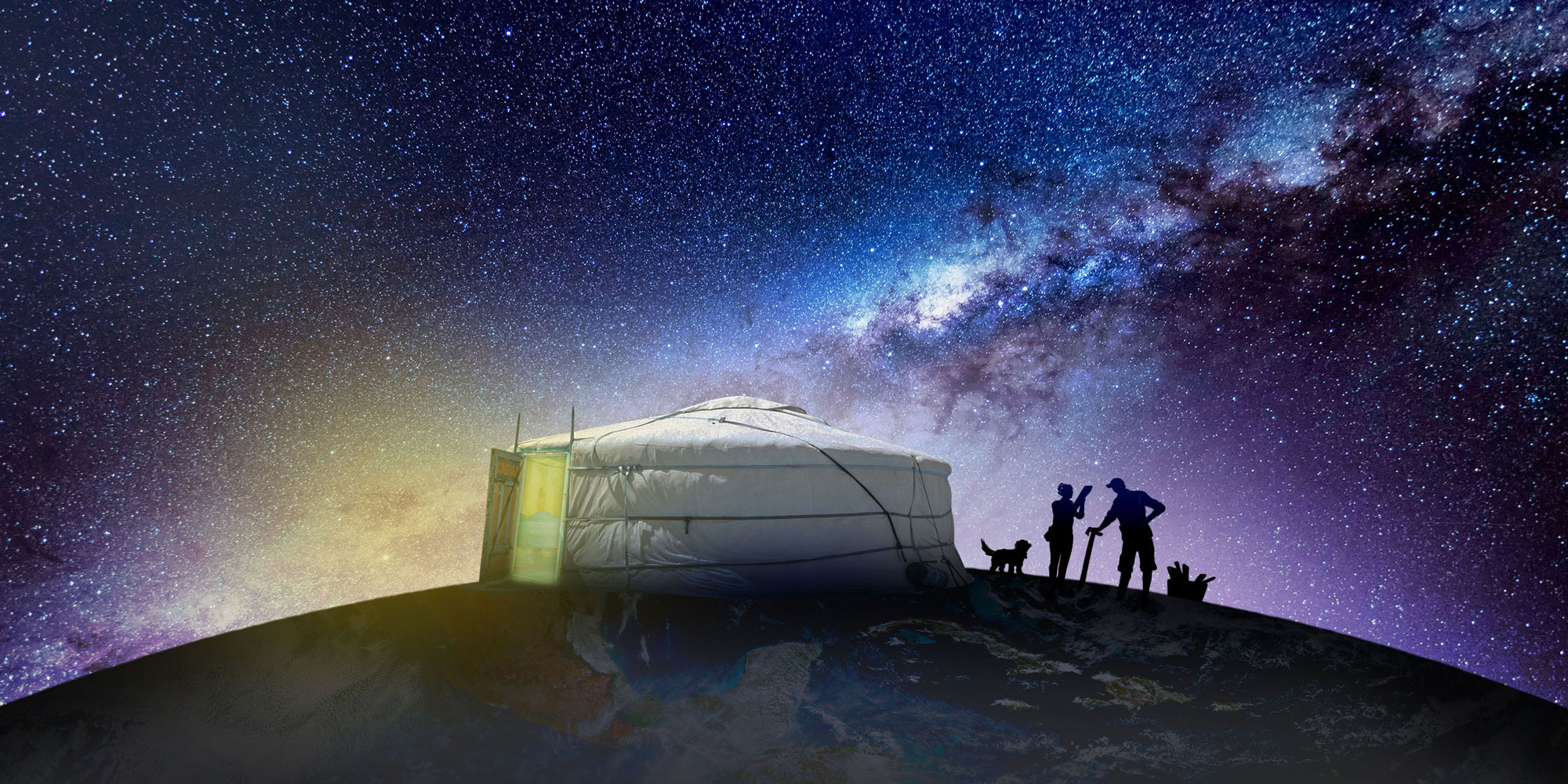 
Not sure what you’ve heard, but the birds love them yurts.
What’s a yurt?
Does it hurt?
Is it sweet like dessert?
Nah, brah. It’s a circular home in the dirt.
You’d think it be cold, it’s so warm that it burns.
Sorta looks like a SKRRRRRT
The gallant fellow, Matt Makarenko,
swore it comes with its perks.
Screwed so many pegs its berzerk.
He exerted his strength till he sweat through his shirts.
Even though it’s his first, he’s now a convert.
He spoke to PD ‘bout the things that he’s learnt.

I like camping for so many reasons. Escaping the digital world. The fresh air. Reconnecting with nature. Building a campfire. Sleeping under the stars. The pitter-patter of rain on the roof of a tent. A squirrel shrieking at me to wake up in the morning. Waking up covered in slugs (true story). That said – and as much as I genuinely have a soulful connection with my Indigenous friends, I am not interested in living in a large TEEPEE full-time. So, for the neophytes out there, what is a yurt?

Well, it’s not precisely a tent. But it’s not a cabin either. It’s the love child between a tent and a cabin. I stayed in one for a night when backpacking through an Israeli desert with Bedouins. I never thought of changing my Amazon mailing address to 1 Yurt Lane and making it a permanent residence. Mongolians have lived in yurts for thousands of years because they can be set up and taken down in hours. The design consists of lattice walls, roof beams, a roof ring, a door, animal felt, horsehair ropes, and a beautiful illustrated hide covering. 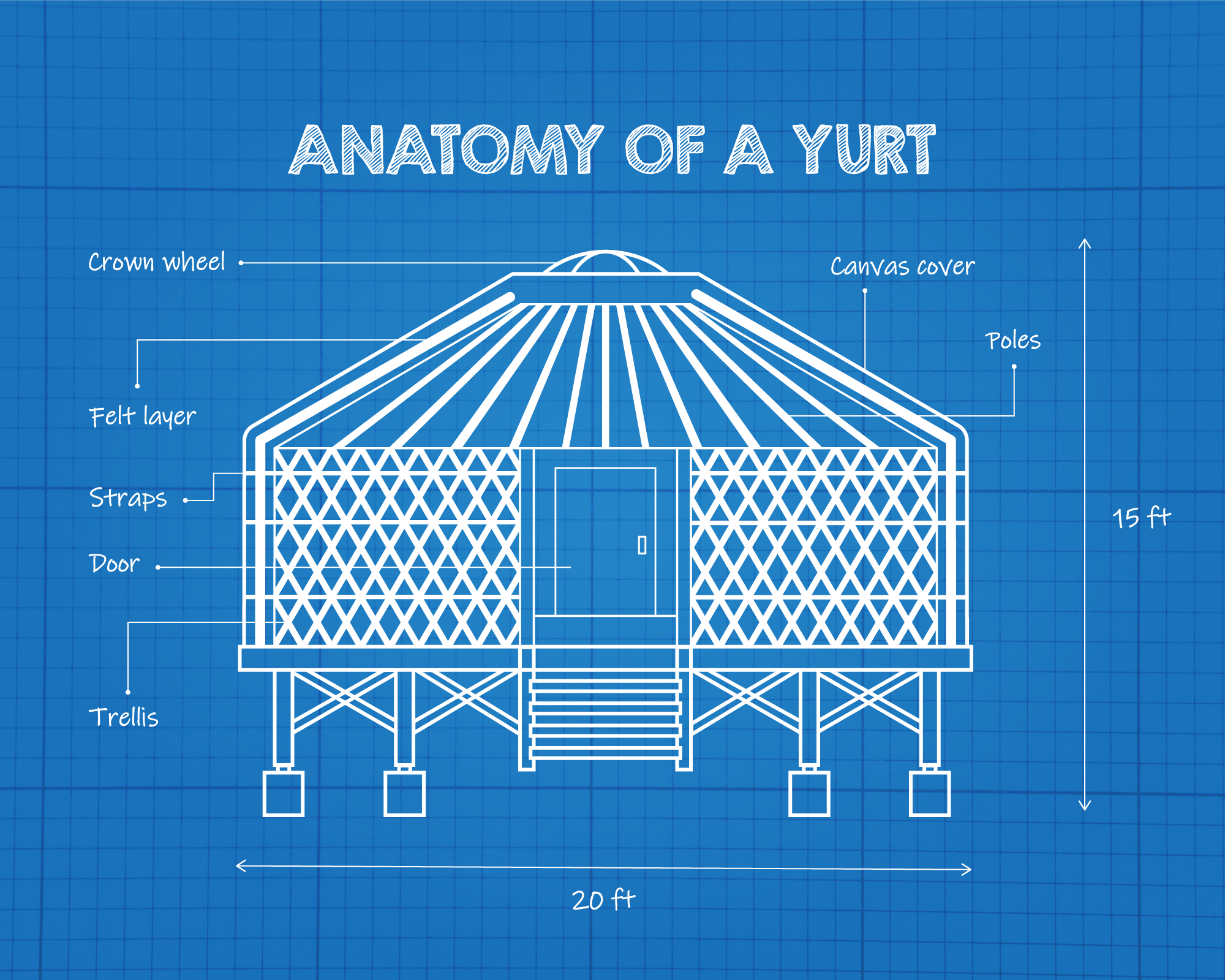 Matt and his S/O Rae seem to embrace the nomadic lifestyle (which makes a stark juxtaposition to Matt’s position at PD in editing and motion graphics – certainly an “on the grid” vocation). They slowly purged their belongings once they moved in together, shed unnecessary weight again when relocating to Enderby, B.C, and once more when they moved into a camper van while waiting for the yurt to arrive from Groovy Yurts – owned and operated by a former truck driver. Another vagabond.

You don’t need to be named Matt to consider buying or even building a yurt, but you need to own land. Bylaws don’t allow you to plunk down yer yurt just any old place and live in it all year. That being said, more permanent structures need to adhere to way more construction codes and guidelines. Yurts cost less than half the price of a cabin and don’t leave any imprint on the ground, so they’re ecologically friendly.

You don’t have to pour concrete foundations, so you can put them in locations where you couldn’t put a regular building. However, considerations need to be made about how it’s sloped for rainfall and where water/electricity lines can be brought in. Usually, the Yurt platform is made to come apart for travel, but Matt decided to make his solid to save some cash. Much of the lumber came from the Facebook marketplace and was stained by Matt’s own two hands. The happy couple installed their own ground screws and foundation with grit and elbow grease. Matt hacked down some of the woodlands around him to create an awning.

Yurts range from three-and-a-half meters to eight-and-a-half meters in diameter, and cost between $5,000 to $25,000, depending on the luxuries desired. Options include heavy-duty insulation in the floors and ceilings, double-paned glass windows, and French doors. They can be fitted for plumbing, electricity, air conditioning, or a wood-burning stove. They’re also relatively quick to assemble. It took about a day to put theirs up once it arrived.

Though they were conceived for cold climates, there is more moisture in Canada, so Matt invested in a layer of high-tech waterproof house wrap and another layer of sheep wool insulation, handmade in Mongolia. Even though it sometimes smells a ‘lil baaaaaad, they found it quite warm over the winter months. With the roundness of the building, they have an ambiance inside that’s really amazing (apparently). Matt describes the inside as peaceful and relaxing. They have fairy lights, electricity to run a toaster oven, a foot pump for cold water, a wood-burning cook stove, and a composting toilet. All. In. One. Room. Matt says that he’s thinking of building another yurt and creating a walkway between them and plans to put up a sheet to create a bathroom, as he doesn’t like his bunny looking at him when popping a squat.

We live in an age where “outdoorsy” means something much different than it did for our great, great grandparents. Maybe that spirit motivated Matt and his girlfriend to uproot themselves…and then clear up long grass, weeds, and tree roots. The sense of pride in building somewhere to sleep with someone you love is certainly something special. I respect the hell out of Matt, but I also think he’s as cray-cray as Genghis Khan.

Check out Matt’s presentation to learn more about his building process!