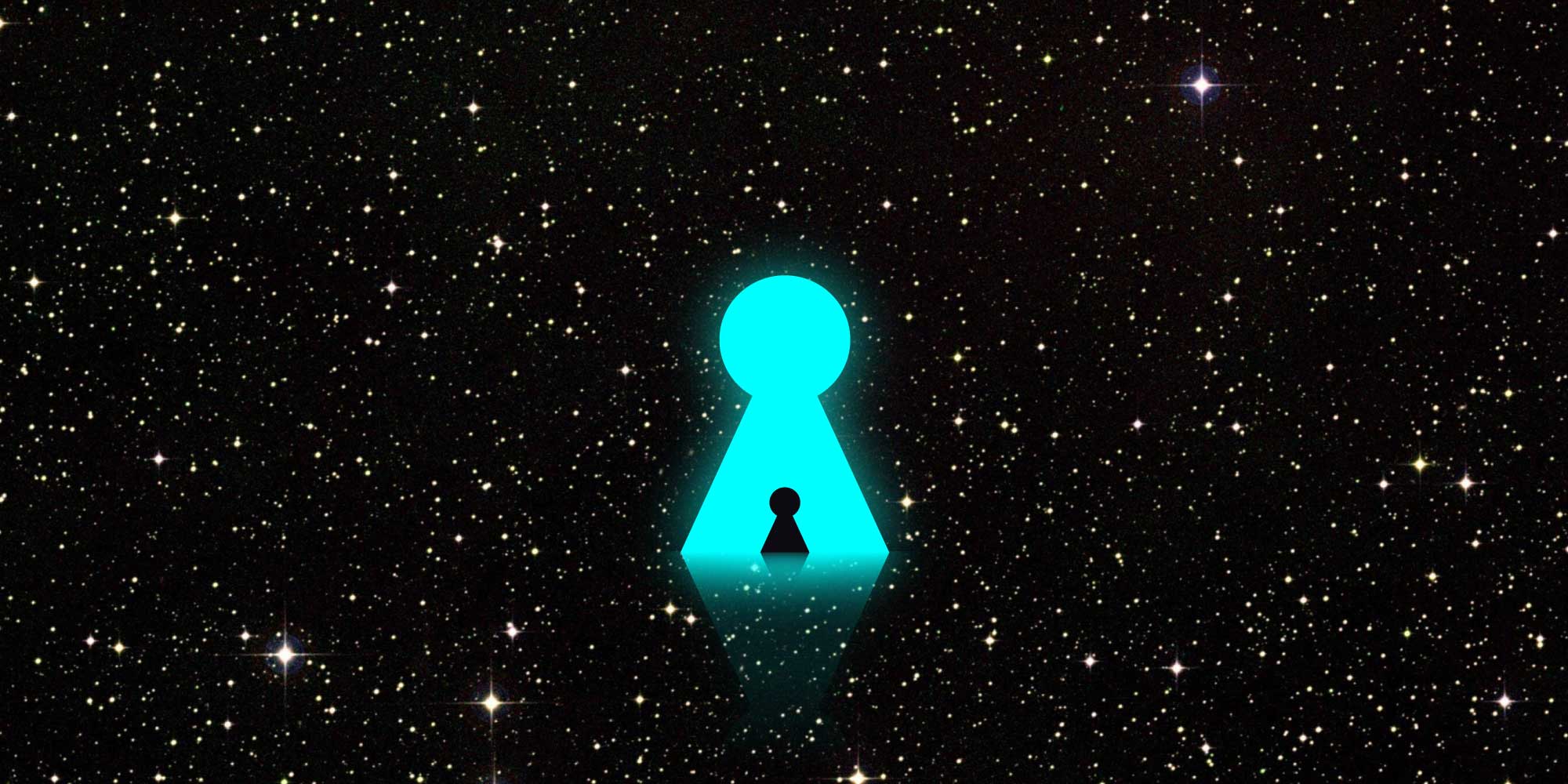 Google “Thine own self” and it autocompletes the famous Shakespeare quote: “To thine own self be true”. A noble sentiment about being true to yourself, around which Star Trek: The Next Generation based an episode and PDT based its November 19 Friducation.

Thine Own Self (S07E16) is a gently packaged lesson about two of the Enterprise’s main characters revealing the essence of who they are when facing adversity.

The episode begins during the night shift on the bridge, with Dr. Beverly Crusher in the Captain’s chair as the unlikely Commander. Questioned by Deanna Troi about why she’s taking on additional responsibilities, Beverly responds that she enjoys stretching her capabilities. This inspires Deanna to reflect on her own ambitions. She’s just returned from a class reunion and is measuring herself up. Does she aspire to a higher rank?

Meanwhile, the regular nightshift Commander, Data, is away on assignment, sent to retrieve a radioactive probe on Barkon IV. His failure to answer hails is thought to be because of radioactive interference from the planet, however, unbeknownst to his crew, Data has been damaged. He is encountered by a father and daughter on Barkon, who see him stumbling into town, muttering incoherently and carrying a strange box with the words “Radioactive”. 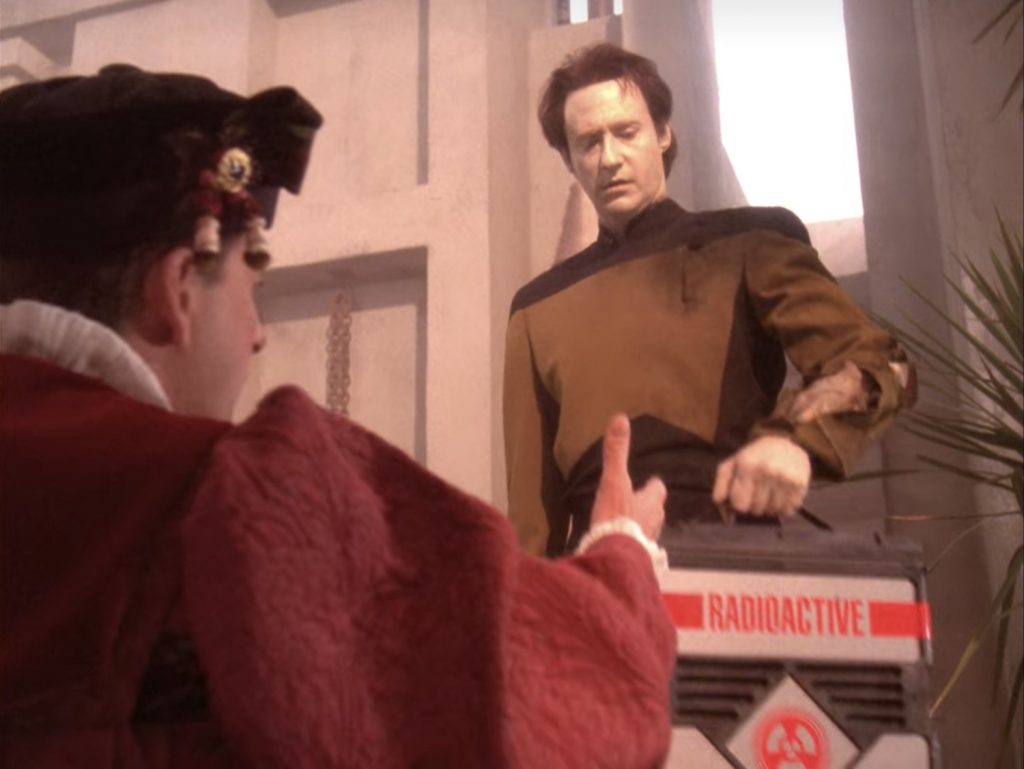 The father, Garvin, sends his daughter away and questions the disoriented stranger. Data slowly regains his power to speak, explaining to Garvin he has no memory of who he is or how he got there. Nor does he know what “Radioactive” means. Data watches Garvin examine the metal rocks, neither one aware of the danger.

Back on the Enterprise, Deanna approaches Will Riker about taking the Commander exam, expressing her desire, like Beverly, to stretch her abilities. Riker agrees, making it clear that as the one marking her, he’ll show no favouritism.

On Barkon IV, while Data’s cognitive ability returns, his memory of ‘self’ remains a blank slate. Garvin’s daughter, Gia, names him Jayden. It soon becomes obvious that Data/Jayden isn’t like anyone else. His advanced scientific knowledge surprises the village doctor, and his physical strength shocks the locals as he lifts a heavy anvil from an injured blacksmith.

However, even while ingratiating himself into his new family, Data has unwittingly exposed them to the toxic radioactive metal. Garvin sells the metal to a local vendor and begins to experience symptoms of radiation poisoning. The effects soon spread to those in contact with the metal pieces. Villagers begin to get sick, and the blame falls on Data/Jayden. In the spirit of traditional prejudices, he’s accused of bringing a plague and is ostracized. 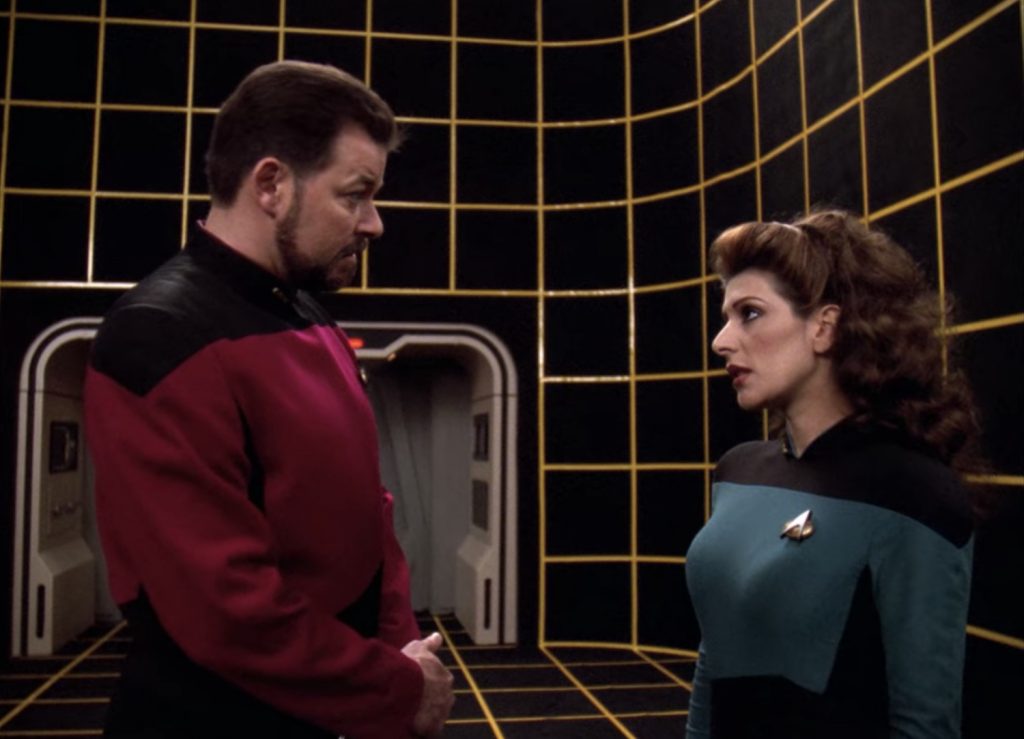 Cut back to the ship, where Deanna is in the midst of a holodeck simulation test where she is in charge during a crisis. Faced with an antimatter containment failure, she is unable to stop the breach and the ship ‘explodes’. Riker approaches her later on, advising her that since she’s now failed the test three times he’s canceling her application. His response: “As much as I care about you, my first duty is to the ship. I cannot let any bridge officer serve who’s not qualified.”

Undeterred, Deanna picks up a clue from his response and returns to the holodeck to retake the simulation one more time, this time ordering a crewmate to sacrifice their life in order to save the ship. The tough decision earns Deanna a passing grade and a promotion to Commander.

Meanwhile, the situation on Barkon IV is becoming critical. Radiation continues to poison the village, including Garvin’s young daughter, Gia. Villagers are forming a mob to punish Data/Jayden. In a violent confrontation with the blacksmith, Data’s face is slashed, revealing his positronic circuitry.

“What are you?”, gasps the blacksmith.

“I do not know”, answers Data. 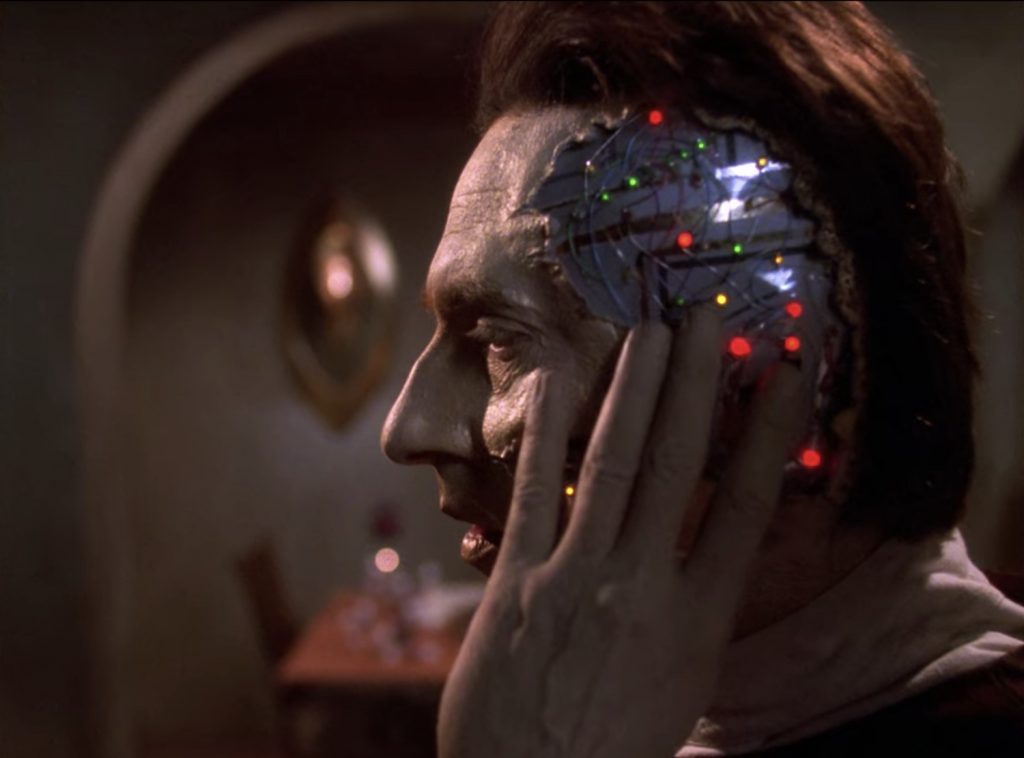 Data goes into hiding, donning a hood to hide his face as he continues investigating the cause of the illness. Building diagnostic tools from the crude materials, he determines the sickness to be caused by the metal pieces he brought to the village. He instructs the village doctor to gather all the remaining pieces and bury them. He then develops an antidote to counteract the radiation, which he gives to Garvin and Gia. Unfortunately, he’s being hunted by the rest of the villagers and must find another way to administer it to them.

As Data is pouring the antidote into the village well, he’s attacked by the mob and impaled by a steel spear. He collapses and is assumed dead. The antidote works, the village is saved, with only Gia and the doctor aware of Data/Jayden’s true role.

A short time later, two new villagers appear. Cosmetically altered and dressed like Barkonians, Riker and Beverly inquire about their friend, an odd-looking stranger who may have visited here. They meet Gia, who points out the tombstone where Jayden is buried. “He was my friend, too”, she says sadly.

Data’s body is beamed back to the ship, where he is repaired and reactivated. When asked what he remembers, Data recalls a power surge but is unable to remember his time in the village. Looking at his Barkonian clothes, he states, “It appears I had an interesting time.” 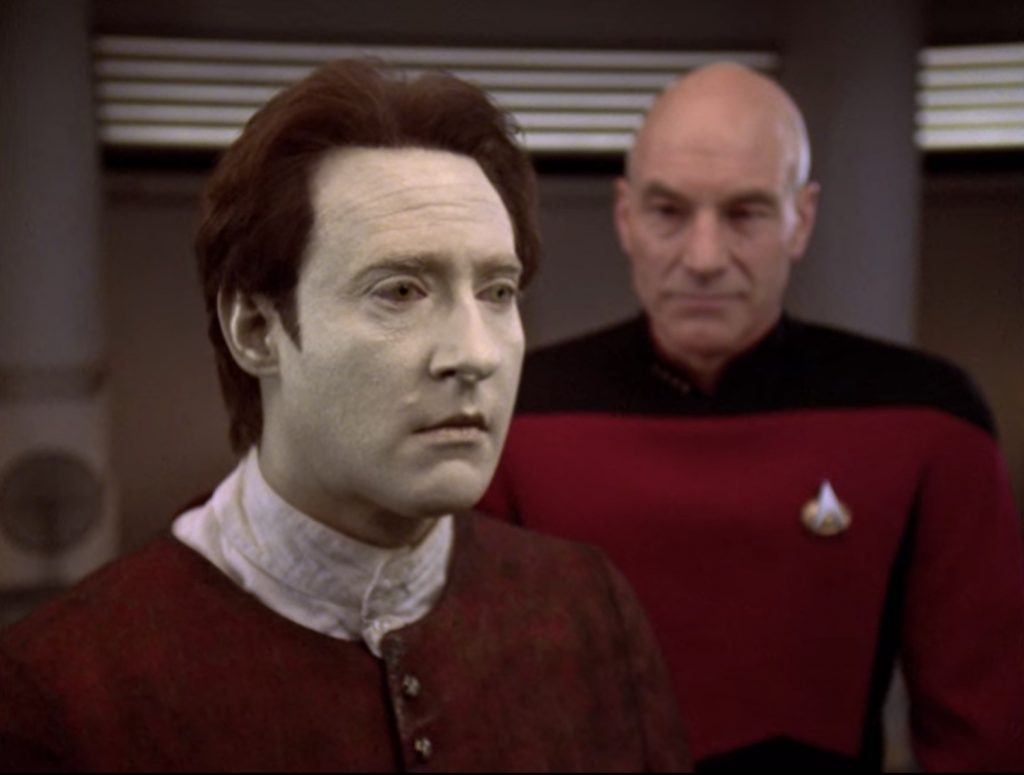 You have to appreciate the irony of an episode themed around the nature-of-self featuring an android with no intrinsic ‘self’ as its protagonist. Maybe that’s part of Star Trek’s appeal – the egalitarian philosophy that all sentience deserves the freedom to discover who they are, or who they can become.

In Data’s case, despite personal risk and tribal prejudices, he persisted in isolating the illness and developing a cure, thus saving the villagers. His ‘own self’ – the gentle and inquisitive pseudo-human – emerged naturally, with no memory of who he was and no expectation of benefits.

On the other end of the self-determination spectrum, Deanna actively redefined her ‘own self’, pushing beyond her boundaries to become more, earning a promotion to Commander.