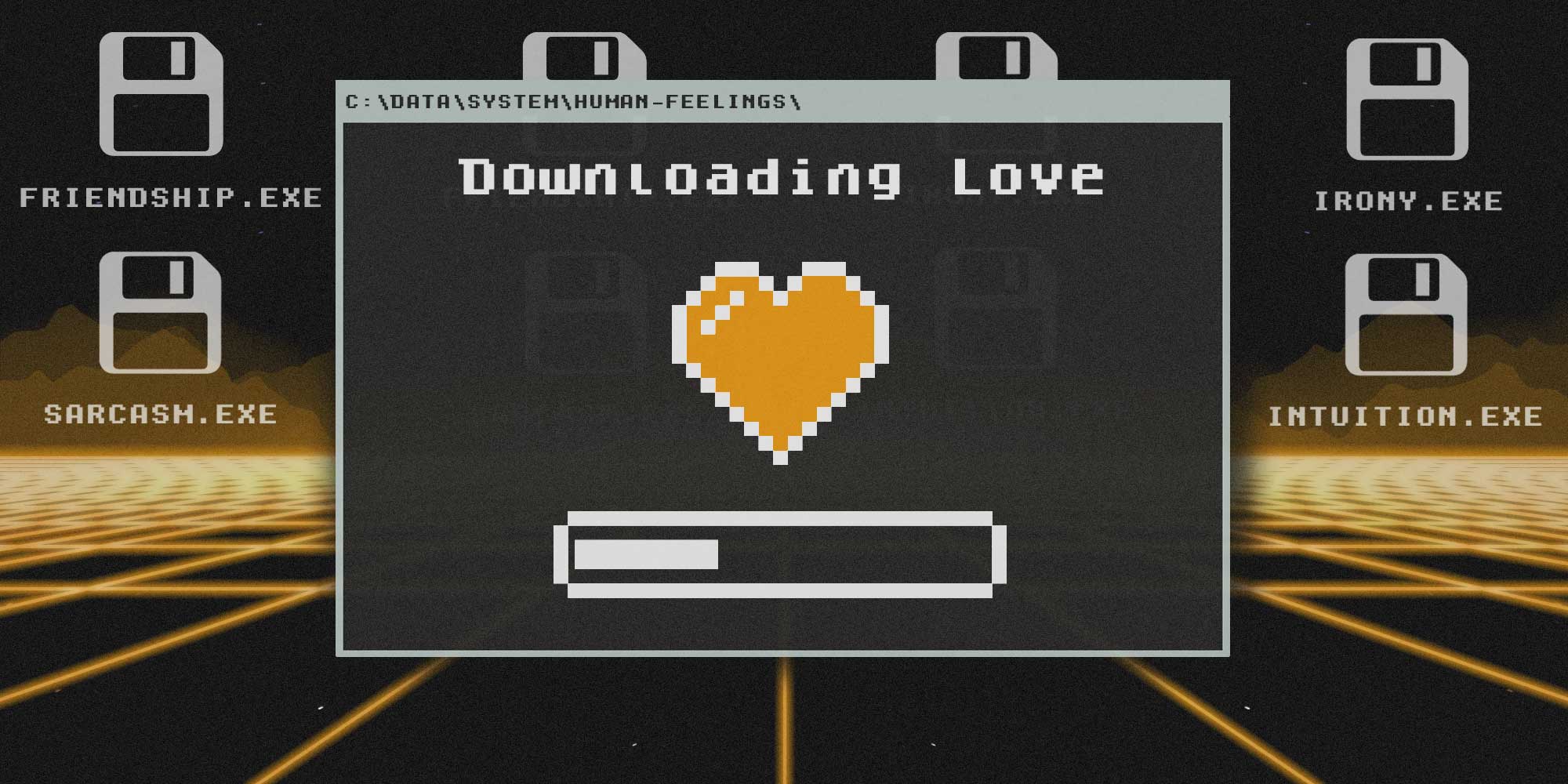 Relationships sometimes require space. In this case, thousands of light-years worth.

On July 23, the PD team got a fresh perspective on human relationships from a galaxy away, as we invested our Friducation in watching another episode of Star Trek: Next Generation.

The Star Trek franchise may be best known for a character from the original 1960s show, the Vulcan officer, Spock, who tolerated our human emotions the way we tolerate a puppy pissing on the floor. The puppy can’t help it. Neither can we. Mr. Spock’s relationship with his human crew was almost paternal, a very different dynamic than we see in The Next Generation between the crew and one of their senior officers, the algorithm-based Commander Data. 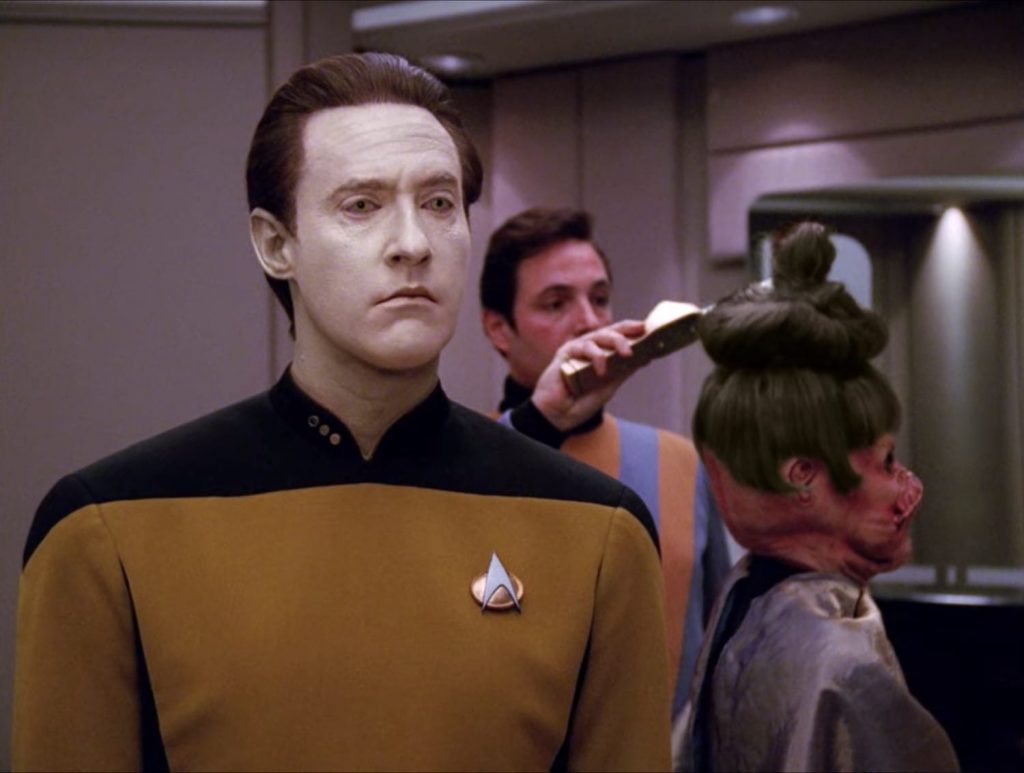 Commander Data is an android, which places him above, apart, and below humans all at the same time. His super-computer brain can easily out-calculate any organic being, but he has no idea why a joke is funny. He is a man-made device that can be turned off like a toaster, but somewhere in his circuitry is an abiding love of human values and human interaction, and a profound desire to become more like them. He is Pinocchio in search of Jiminy Cricket. And a suntan.

Data’s Day begins with Data logging his daily activities, a task he performs as part of a study the Federation is conducting on him. Since his activities involve interacting with humans, the episode’s observations, conversations, and conflicts become a study of humanity, told from the point of view of an outsider. 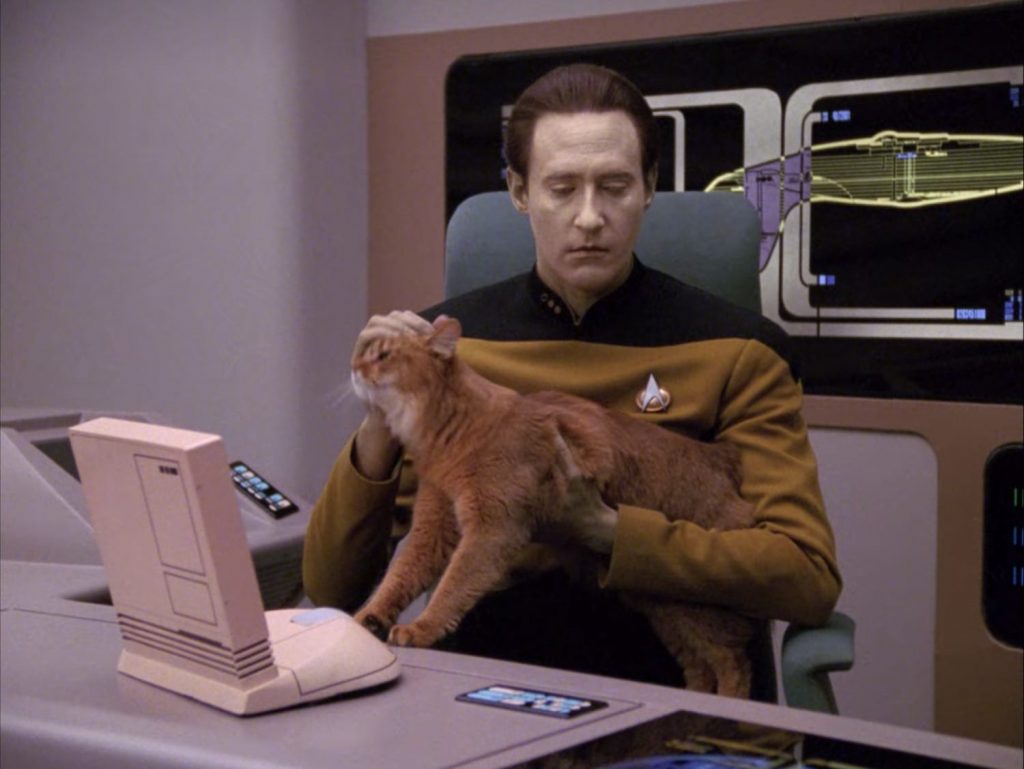 The fascination with Who We Are has been a part of Star Trek since its beginning. In fact, some of the franchise’s best moments have been its quietest and most philosophical. To the coldly logical Mr. Spock, our hormonal twists and turns were seen as weaknesses. To an android without a soul, our existential yearnings look like super powers. Either way, we’re a complicated and high-maintenance species.

We may not need to explain our human-ness to each other, but we certainly need to explain it to Data. During this pivotal day, Data experiences key pieces of our human puzzle through a tableau of subplots. Trying to figure us out would overload any super-computer and Data’s programming hits a wall more than once. Luckily, he has friends who help demystify our messy, emotional minds. 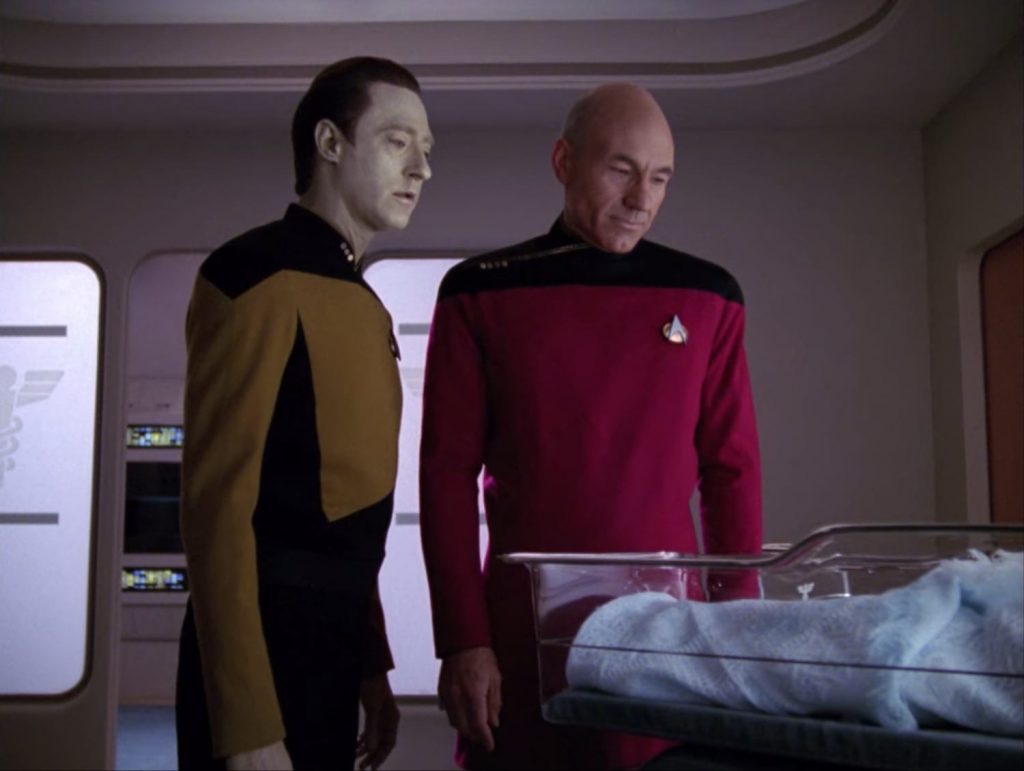 It’s Keiko and Miles O’Brien’s wedding day. Or it was, until Keiko reveals to Data that she’s changed her mind. The wedding’s off. Data processes the decision and promptly tells Miles that – good news! – Keiko no longer wants to marry you. Since you value her happiness and this decision makes her happy, everyone should be pleased, right? The backlash is a crash-course for Data on human hurt and anger, and the limits of deductive logic. 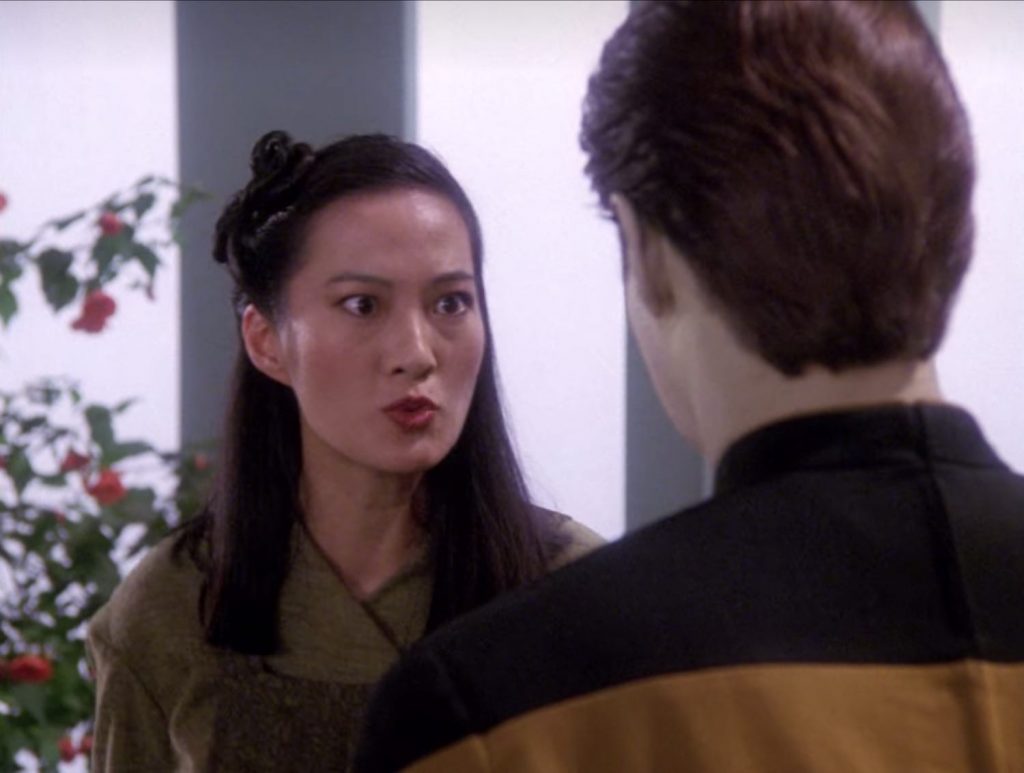 Data looks for clarity by consulting with his friends. Geordie clues him in on the dangers of being too literal. Deanna, the empathic ship’s counsellor, explains the difference between what we say and what we mean. Data inputs these new reactions and moves on. 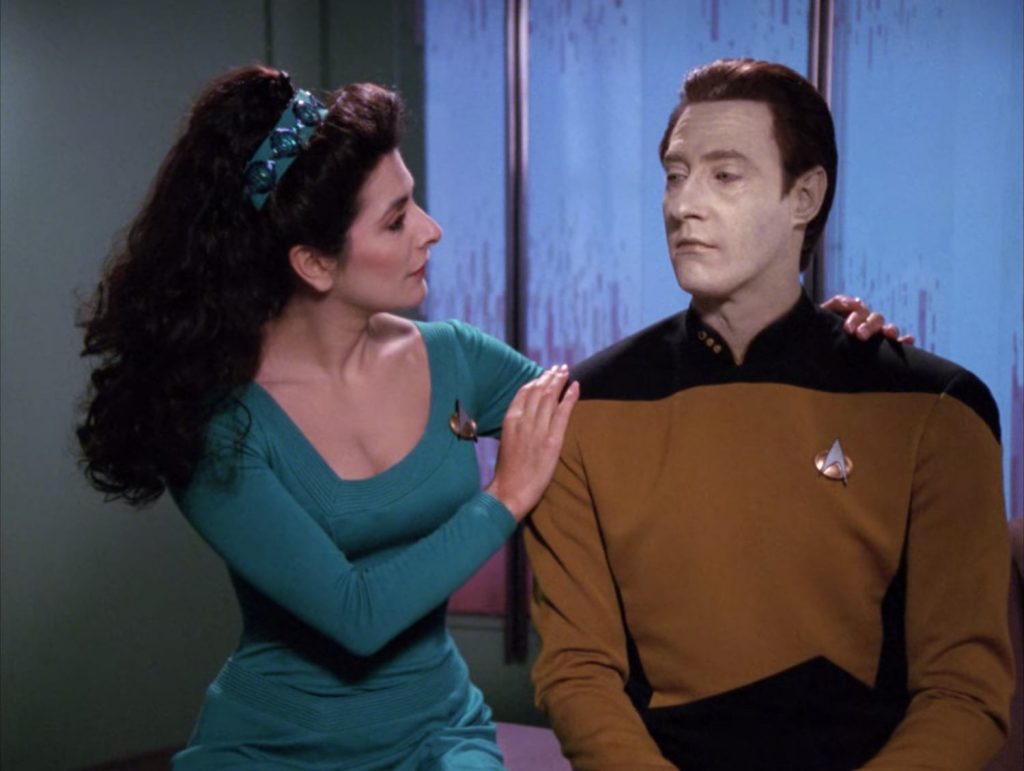 The wedding drives the plot forward for Data’s next interaction with Dr. Beverley Crusher. He’s heard that people dance at weddings and wants to learn from the doctor, who had tap-dancing experience. The nuance that tap-dancing is rarely performed at weddings is, of course, lost on him. Dr. Crusher is reluctant. “I don’t want to be known as the dancing doctor… again!”. She finally relents and shows Data how to tap-dance, and Data’s positronic brain instantly logs and duplicates her complex tap movements. However, the relatively simple ballroom dancing is beyond his capacity. While Data can effortlessly mimic a series of choreographed steps the same way he mimics being human, he is incapable of improvising. While Data is eager to be like us, we see why he never can be.

Apart from the crew’s interpersonal relationships, the episode also takes us on an actual mission. Vulcan Ambassador T’Pel is beamed onboard, where she is to be brought to a rendezvous with the Romulans to begin diplomatic negotiations. With typical Vulcan curtness, she summons Commander Data and requests confidential security information. His internal security protocols prevent him from answering. She claims to be satisfied with his refusal and dismisses him. 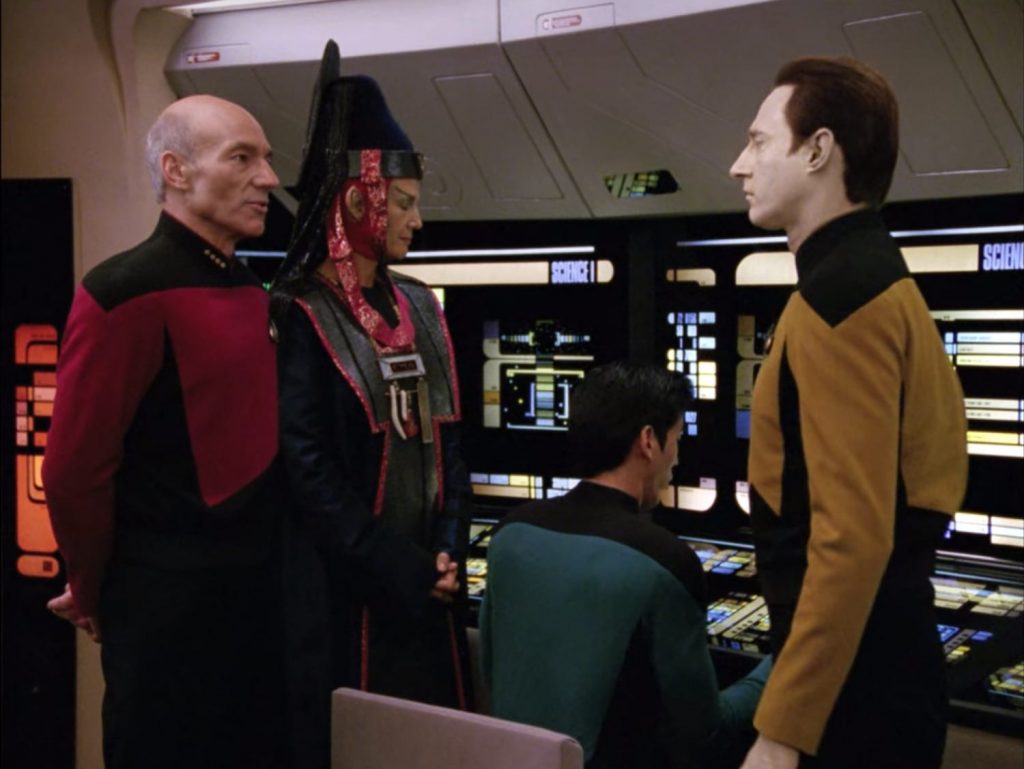 Data, however, is not satisfied. Although he accepts her statement, he expresses the wish for something humans call, “A gut feeling”. Something in his positronic circuitry signals him that the interaction was not what it appears; unfortunately he lacks the intuition to distinguish what it is. The mission takes a tragic turn when the Ambassador is killed in a transporter accident on the Enterprise. No explanation can be found for the malfunction, Captain Picard is accused of sabotaging negotiations by the Romulan Commander, the diplomatic mission appears to have failed. 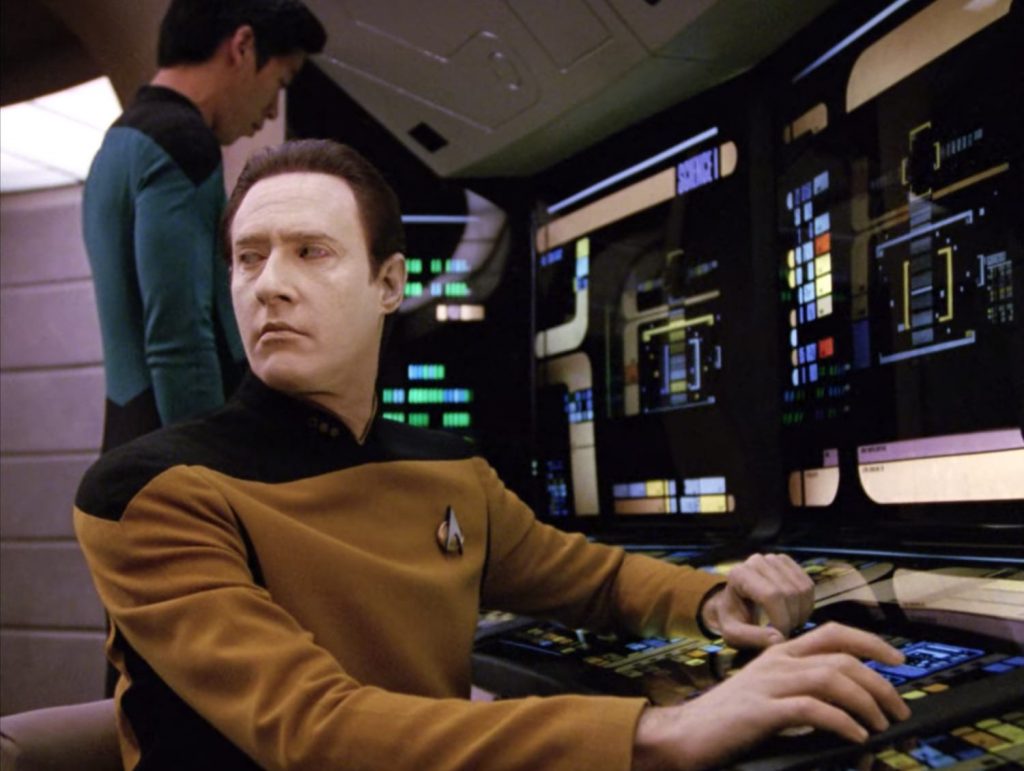 Data decides the best approach to an unsolvable mystery is to borrow from a well-known mystery solver: Sherlock Holmes. Mimicking Holmes’ deductive powers, Data determines that the Ambassador’s death was staged by the Romulans to cover her abduction. This revelation culminates in a tense standoff between Captain Picard and the Romulan Commander, which Data compares to a game of poker. Although he lacks the ability to bluff, Data recognizes its value as he witnesses Picard threaten the Romulan unless the Ambassador is returned. The Romulan Commander finally shows his cards by revealing that the Vulcan Ambassador was, in fact, a Romulan spy. With no moves left to make, the Enterprise withdraws from Romulan space. 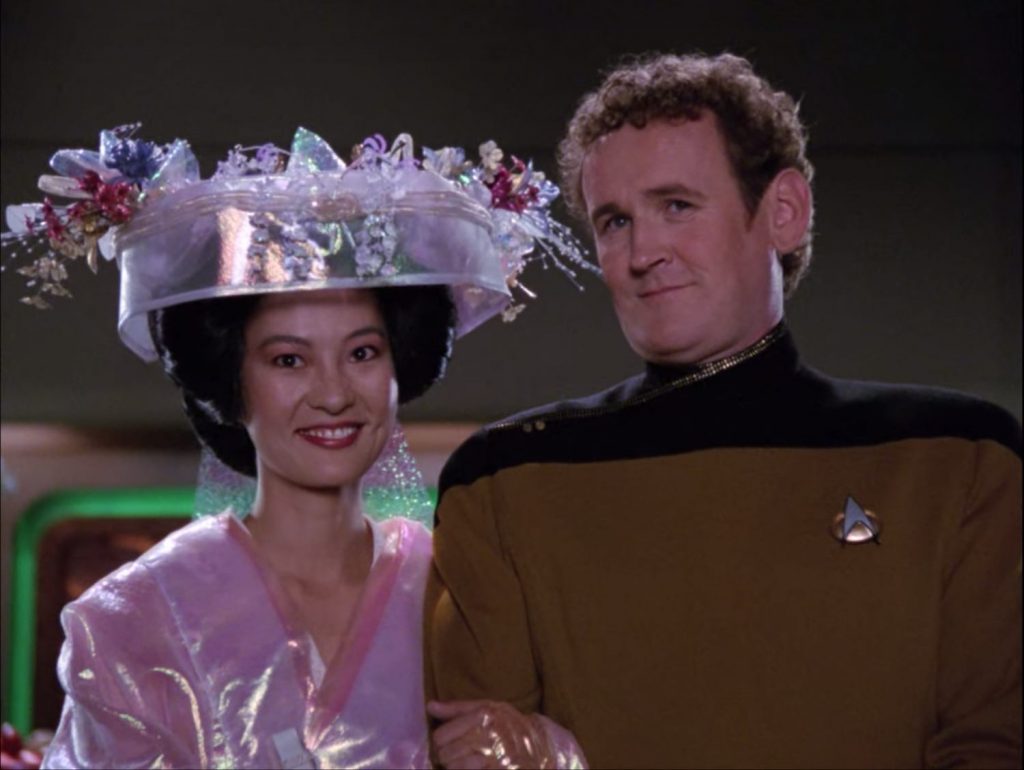 The mission may have failed, but the pre-wedding jitters are finally resolved. Keiko and Miles are married and Data dances at the wedding. Data’s Day ends as he relieves the bridge crew to begin the night shift. His final thought as he completes his log: “There are still many Human emotions I do not comprehend; anger, hatred, revenge, but I am not mystified by the desire to be loved or the need for friendship. These are things I do understand.”

Data’s Day is a celebration of how marvelous and terrifying it is to be human. Emotions have gotten us into a whack of trouble over the last hundred thousand years, but they’ve also lifted us to our greatest heights. Data may be a fictional character on a faraway starship, but this day-in-the-life episode brings us back to Earth with a reminder to appreciate our highs and lows. Being human is a thrill ride we never realized we were on. 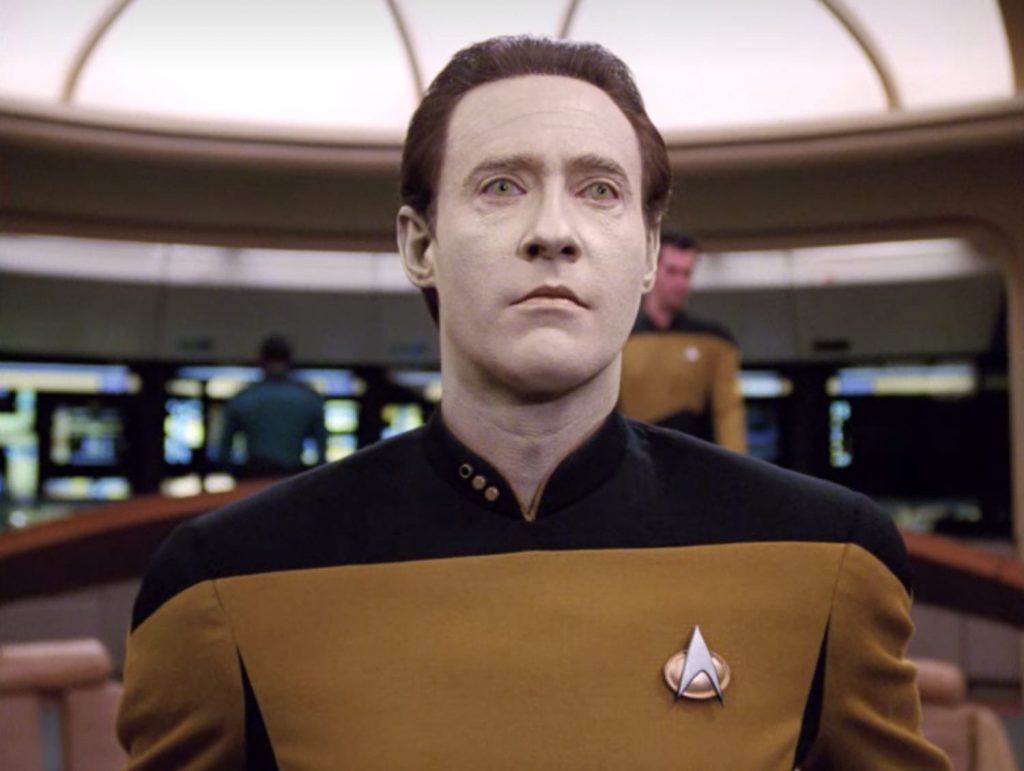