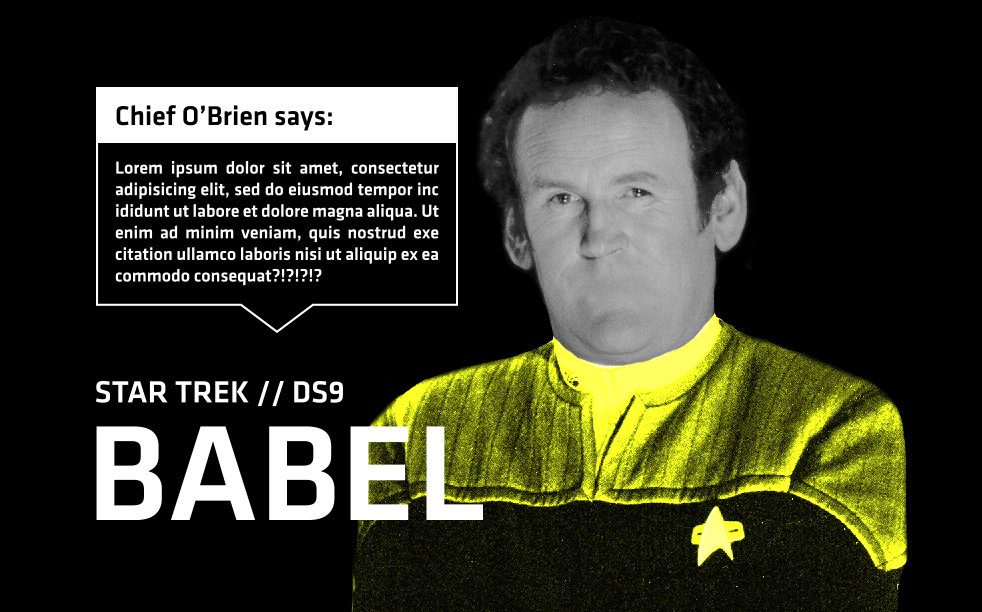 Chief O’Brien is having to deal with numerous malfunctions throughout the station. This includes most of the station’s replicators. While fixing one of the replicators, O’Brien unknowingly activates a device that was placed in one of the replicators. Shortly afterwards, O’Brien begins showing signs of aphasia — he becomes unable to speak coherently owing to a dissociation between any intended thought and the exterior expression.

At first, Doctor Bashir is not sure why O’Brien suddenly became aphasic. Tests showed no physiological causes, but when Lt. Dax suddenly becomes aphasic right before his eyes, he soon realizes that they are dealing with a virus that only mimics aphasia. He also determines that the virus is in the food that had come from command level replicators, but that the other replicators aren’t producing contaminated food. People all over the station were showing signs of infection as well. The station is put under quarantine to keep the virus from spreading.

Quark, with his replicators still not functioning, claims that his brother, Rom, fixed the replicators. Odo discovers that Quark decided to produce the menu from his bar using a functional replicator in an abandoned set of crew quarters on the command level. The result was that the contaminated food was spread all over the station. As the virus spreads,Bashir discovers that the virus has mutated to become airborne. It also caused a dangerous high fever in its victims, which might kill them.

The doctor (Dekon Elig) who created the virus had died while in a Cardassian prison. As the doctor (Surmak Ren) terminates a Comm line as Kira asks him about the virus, Kira decides to go get him. At first, Sisko declines Kira’s offer, but then Odo recommends to Sisko that she goes because she is “all we have”. Kira links with a computer in his office and transports him to a runabout. He is infected upon entering the runabout.

Meanwhile, virtually the entire crew is incapacitated. Captain Jameel, who was desperate to leave in order to deliver a perishable cargo, tries to leave the station without clearance, and ruptures his power core in the process. Odo mentions that if it were to explode it would take half the docking ring with it. Quark helps Odo save the station from the ship by ejecting it from its docking port before it could explode, destroying the ship in the process. The Bajoran doctor eventually finds a cure and the station’s crew returns to normal.