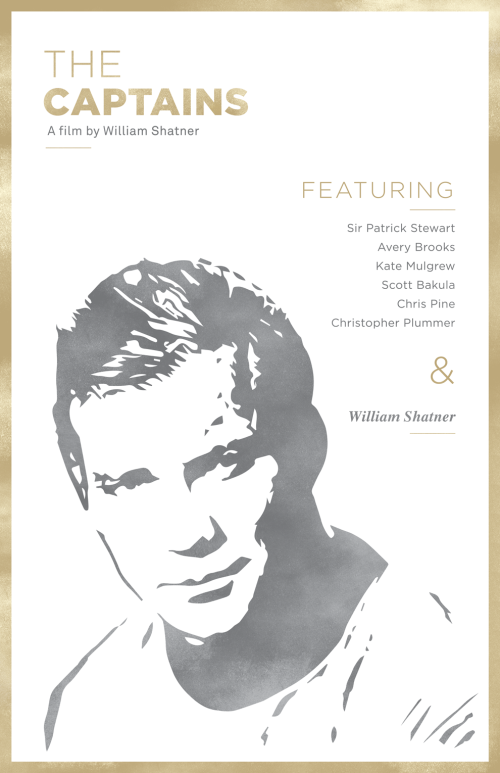 The Captains is a 2011 feature documentary that follows actor William Shatner through interviews with the other actors who have portrayed starship captains in five other incarnations of the Star Trek franchise. Shatner’s subjects discuss their lives and careers before, during and after their tenure with Star Trek. They explore the pressures, stigmas and sacrifices that accompanied their roles and their larger careers.[1][2] The film makes use of conversations, personal observations, interviews and archival footage.
On July 21, 2011, Mike Hale of the New York Times wrote, “The Captains turns out to be largely about William Shatner. That’s not a criticism. Mr. Shatner’s genial, relaxed self-absorption is a large part of his charm, along with his odd cadences and his unparalleled knack for blurring the line between pomposity and sincerity. He has a kind of reverse Midas effect: everything he touches should turn creepy, but somehow it doesn’t.” Hale goes on to say in his review that the film is, “pretty tolerable as vanity projects go. And it should be catnip for Trekkers and Trekkies”.[1]

TrekMovie.com’s reviewer Anthony Pascale had mixed feelings claiming, “The Captains is overly long, a bit self-indulgent, and possibly overly ambitious. The direction and editing are trying a bit too hard with Shatner not really letting the core content of his interviews stand out.” Pascale concludes with saying that The Captains “is still a must-watch for any Trekkie. You will learn, you will laugh, and you may even cry watching The Captains. Sure there is an element of being an ego-trip for the director, but what else would you expect from The Shatner. It is still a delight to spend almost two hours with these six outstanding actors who have entertained us for decades.”[3]

Popular Culture/Science Fiction website UGO Networks reviewer Jordan Hoffman gave the film a B-rating declaring, if you like this film, “You recognize that William Shatner may be a fool, but he’s our fool.”[4]

Gregory Weinkauff of The Huffington Post wrote of the The Captains that the production was “elegant, enlightening, expansive, and, by turns, hilarious and moving.”[5]