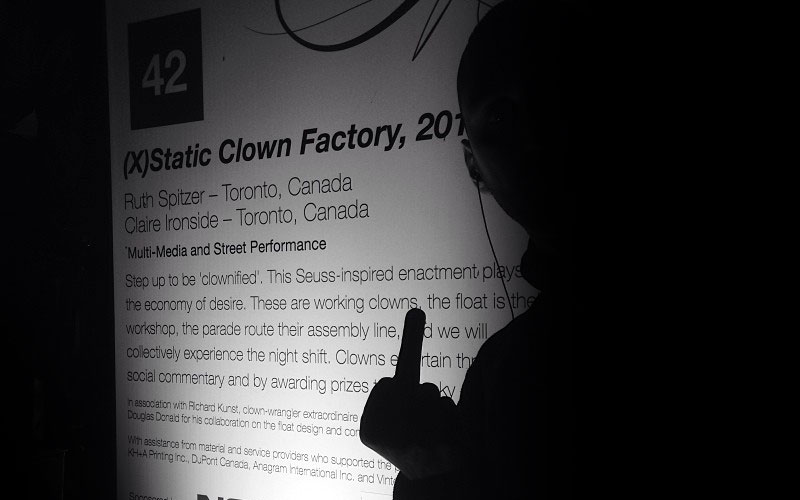 Another edition of the annual all-night art festival in downtown Toronto began with a meet-up at the Pixel Dreams Studios. We headed out following a round of photos, some displaying PD’s own artwork, some twerking, and planning ahead with an event map.

Travelling via bicycle we hit up David Pecaut Square to be greeted by the shocking sight of Burrman, a guy covered in those nuisances from nature known as burrs, with an ambulance and EMS ready nearby. Then over to City Hall for the marquee exhibit Forever Bicycles by Ai Weiwei, a huge 3-story display that made us wonder if it was about the interconnectedness of cycling or an object for daring blanchers to climb. Close by was another puzzling display featuring two large construction cranes holding up a giant hammock. A poem written in large lit-up letters and some driverless cars coasting on a skating rink could be glimpsed between the crowds of attendees and Maple Leafs fans partying.

The crowd on foot was moving slow so it felt good to get back to riding. We hit up OCAD, U of T, and The ROM, only to find not much going on there. But we got back into it on University Ave. where the Gardiner Museum was open and displaying it’s great collection of plates, masks, sculptures and more. Then we continued down University Ave to see an assortment of exhibits on the back of trucks (the ultimate in temporary art), and a group of Hare Krishna’s drumming and chanting in the park. We stopped for a refueling snack and then continued on to eventually find the essence of nuit blanche 2013 in a bunch of clowns on a circus truck. At the sight of this we gave a collective Ai Weiwei inspired middle finger to the whole night of white light.

We didn’t even make it to Dundas Square or the Queen West art gallery strip this year, we also didn’t bother to wait in any of the numerous line-ups, in fact we had more fun making our own art. With Dreams and Star posting updates all night to social media and Liberty recording some video clips. We ended the night off at The AGO walking through galleries full of depictions of the torturous crucifixion of Jesus Christ and the realization that the best art we’d seen all night had been at the AGO and the Gardiner Museum showcasing their regular collections. Hey, at least we can look forward to next year as we develop an appropriate exhibit to showcase nuit blanche; A line that goes to nowhere.