As I get off the subway at Union Station I almost collide into two teens dressed in Star Fleet uniforms. “This must be the way to ComiCon”, I think to myself as I follow them up a flight of stairs. I continue my way to the venue where more cosplay kids join the fray- I see a beautiful lady dressed in a Tardis cocktail dress, Master Chief from Halo and countless Anime characters. It’s as if my comic book shelf has exploded all over the Metro Convention Centre. ComiCon 2013, I have arrived.

Among the cosplayers is our ever adorable Justine dressed as Sailor Mars. She meets me at the entrance and I follow her through the crowd towards our tables. Several crowd members spot her and ask for pictures which is the ComiCon way of saying “Nailed it”.  The crowd is a mix of ages, races and genders; it’s the transcendent thread of nerdom that draws us all together. 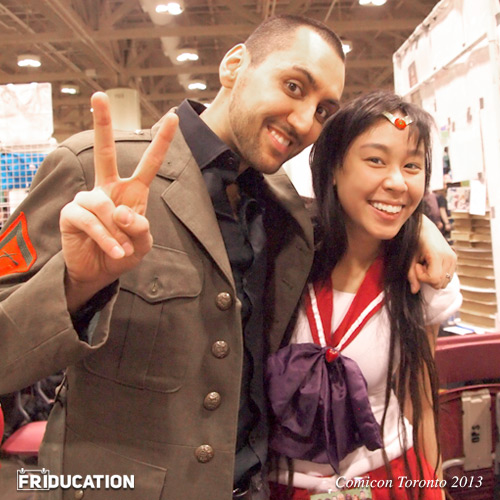 We reach our destination – the Pixel Dreams vendor tables at the Artists’ Alley. Our tables are adorned with the fruits of Friducation’s labour; Lannie’s brilliantly cheeky postcards under a sign that reads Free Shit!, custom comic book collages, an array of Star Trek schematic arts, including the show-stopping laser-etched acrylic works and my personal favourite the Lt. Commander Data poster crafted by Pixel Dream’s own Trevor-the same poster that Brent Spiner himself would complement later that day (!!!!!!!!!!!). Patrick Stewart also sent one of his security guards to seek our booth and inform us that he signed and loved the Next Generation comic board we made (and sold). 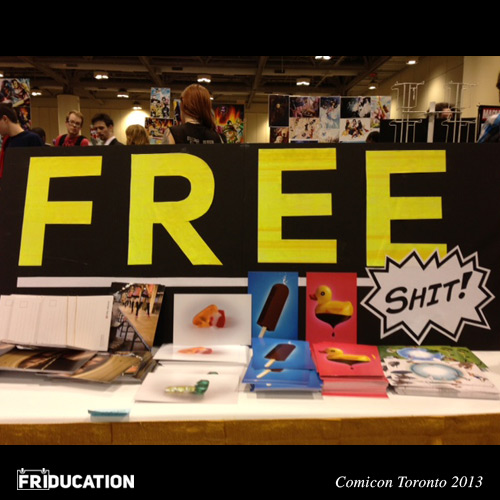 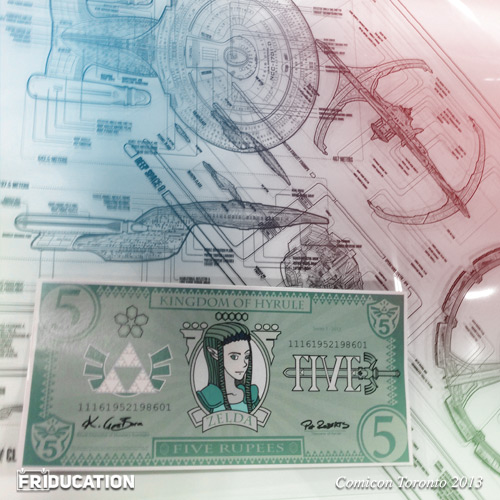 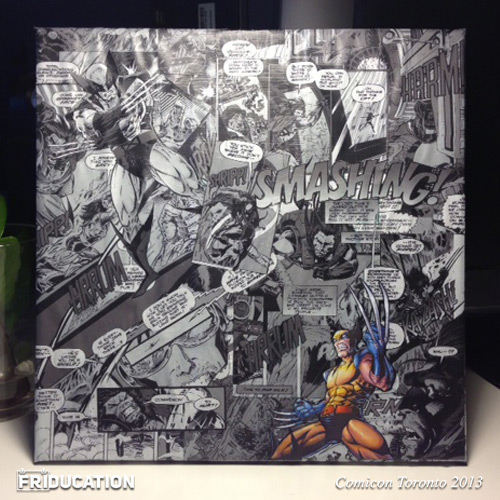 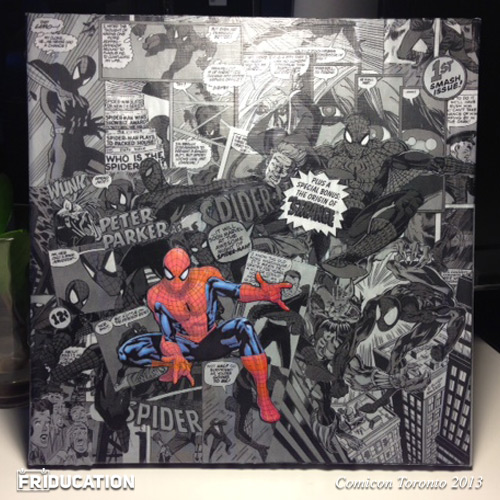 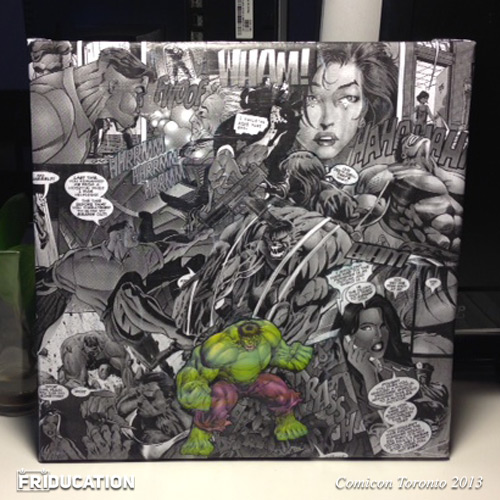 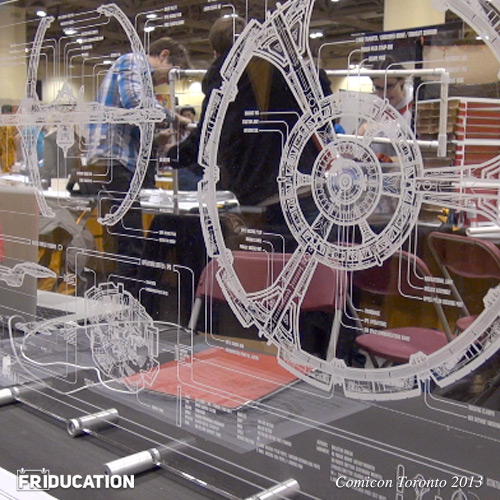 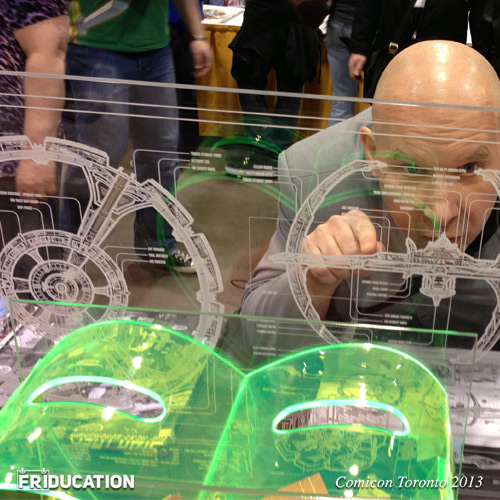 Our day is a busy one. The crowd steadily grows, so by midday there is a constant flow of people at our tables, some to browse, some to buy. It’s a perfect ratio between those in and out of costume. Working ComiCon is funny, you’re so busy that you barely notice when Captain America and Sub Zero show up together to peruse your wares.

Serge and I spend some time collecting entries for the upcoming Friducation draw (the prize: schematics of the Enterprise laser etched on a sheet of plexi glass). It’s a rare opportunity to interact with the crowd especially the Trekkies. At one point Khalid remarks “Star Trek fans are some of the sweetest people”. Soon after Hugh, the fallen Borg appears at our tables and Lannie and Khalid’s faces light up. While the man’s appearance is intimidating, his face is a permanent smile. He laughs easily as Khalid and Lannie talk and pose in photos with him. 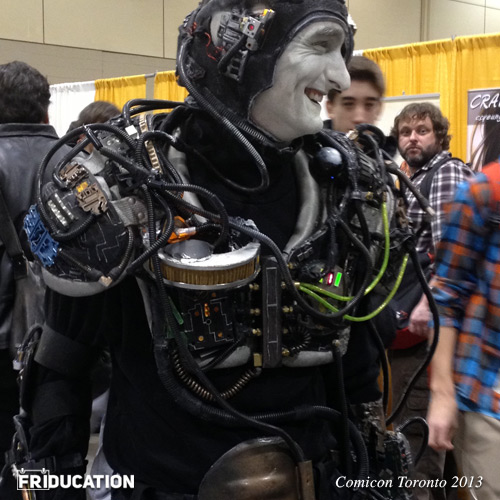 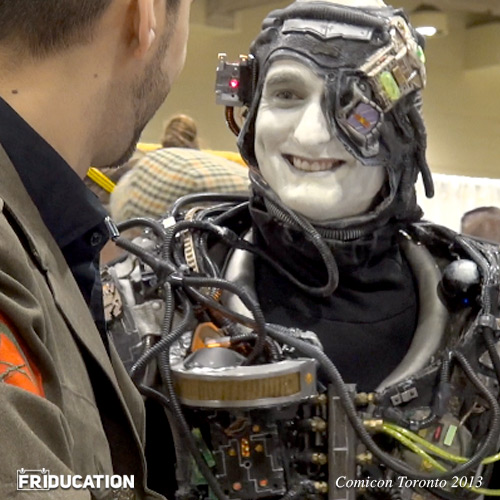 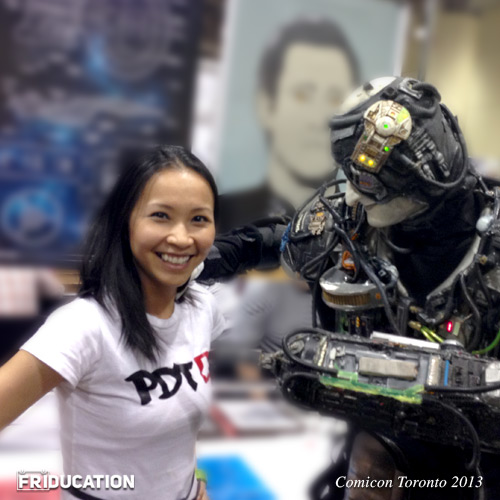 As the day draws to close a growing buzz starts up. It’s getting close to the real reason we are all here-for the first time in Toronto the cast from Star Trek: The Next Generation are assembled.

We dismantle our tables at a furious rate to line up for our seats. There’s a bit of confusion (well a lot of confusion) before and during the talk due to the disorganization of the ComiCon Staff including really poor audio. The audio was so bad in fact, Marina Sirtis stops midway through the talk to tell the sound guy “to get his shit together”- which is especially funny coming from the lady who played the demure Counselor Troi. 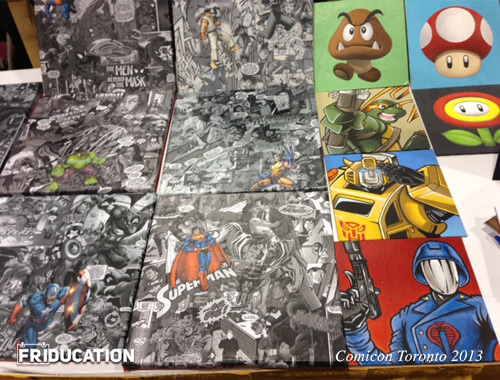 All the hiccups aside the cast of The Next Generation live up to any expectation we all had. There of course were the obligatory Shakespeare quotes, fond stories and razzing Michael Dorn about his time spent on “Deep Throat 9”.

Highlights also included the cast talking about what they did (or did not steal) from the set, Patrick Stewart planting an emphatic kiss on LeVar Burton and Brent Spiner’s…well just Brent Spiner. The night truly felt like we were hanging out with the cast-all 500+ of us.

Admittedly, the sound and seats could have been better but that was the furthest thing from my mind as I left the Auditorium. This was my first ComiCon convention, and although I am only halfway through the TNG series I feel inducted into the ranks of a Federation Fan. Working the tables rather than just touring the crowd allowed me to see Star Trek the way the fans really do. To see an entire family including their infant dressed as Star Fleet officers admire our  Star Trek art or the footage Libby shot of Lannie, Khalid and Trev talking to Brent Spiner as they gave him one of our posters made me feel closer to Star Trek. It also made me feel closer to the PD crew. 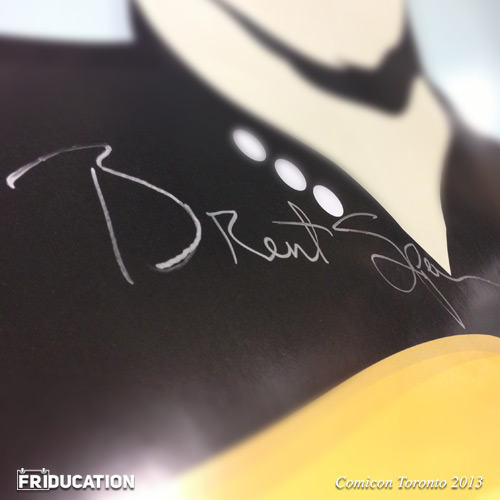 I’m still the new kid on the block here at Pixel Dreams. Sometimes I feel a bit like Data, a little confused about my place within Pixel Dreams – still trying to make sense of everything. But like Data, I am part of crew. Though we were running tables rather than piloting a Starship the sense of comradery was still there. It was great to be part of it. When I got home that night, I took the small brass communicator pin I got from the convention that day and pinned it onto my denim jacket. If Star Trek is as much about adventure as it is about teamwork, so too can the same be said about Pixel Dreams. 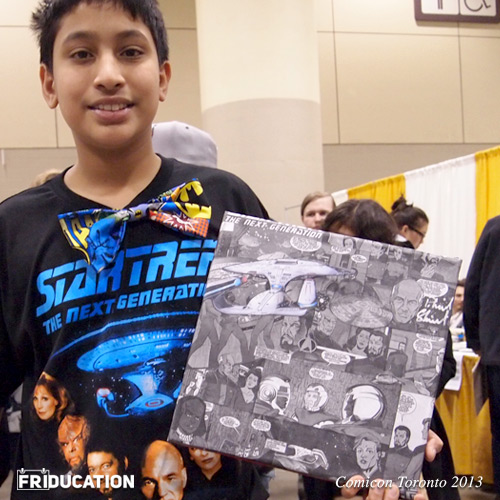 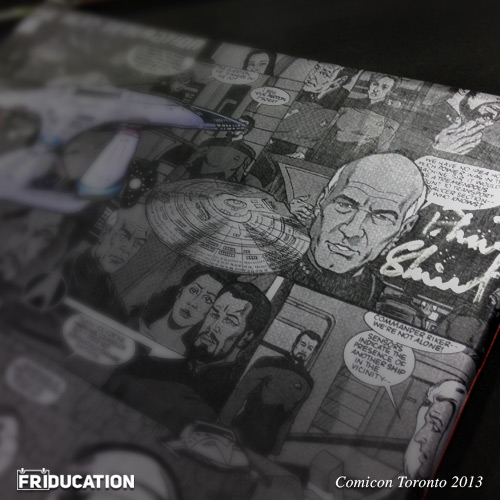 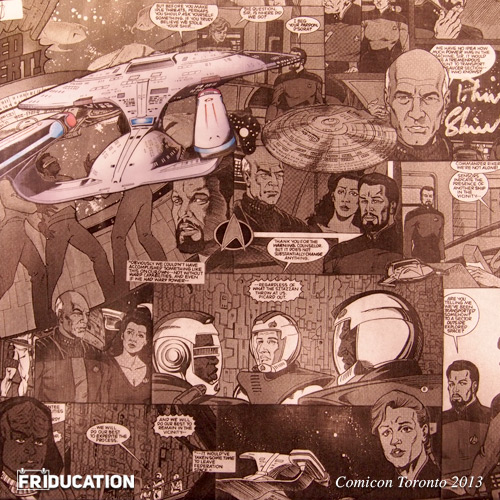 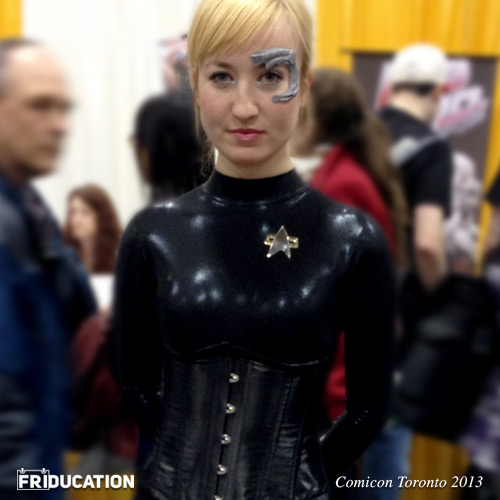 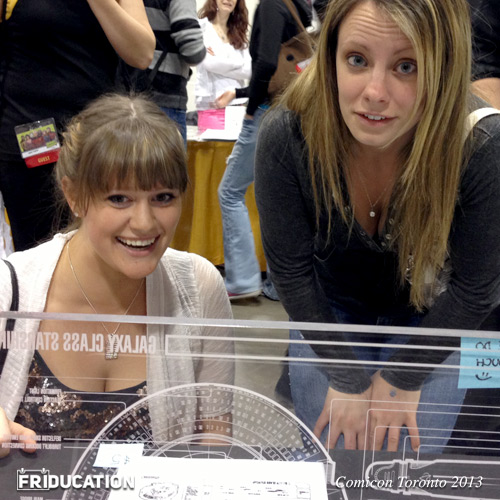 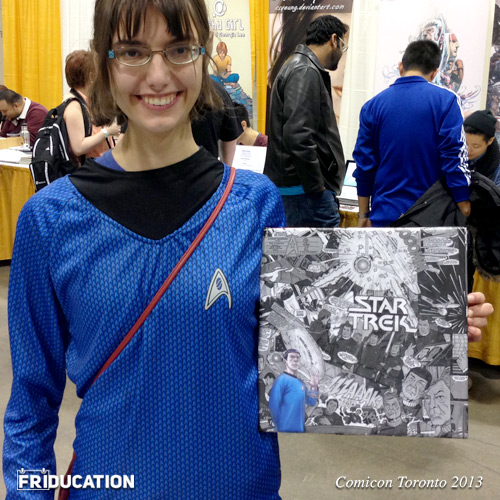 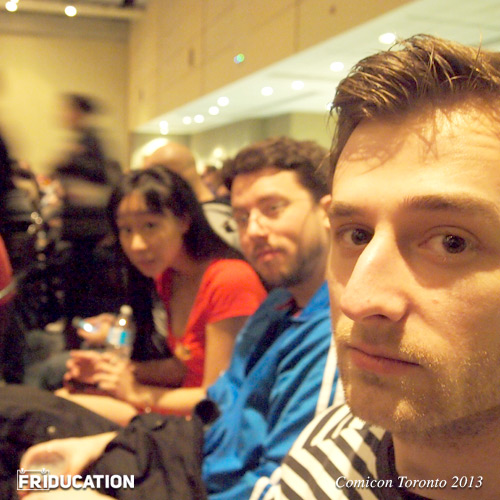 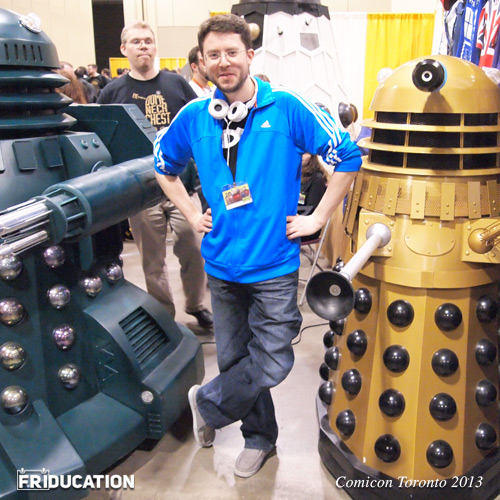 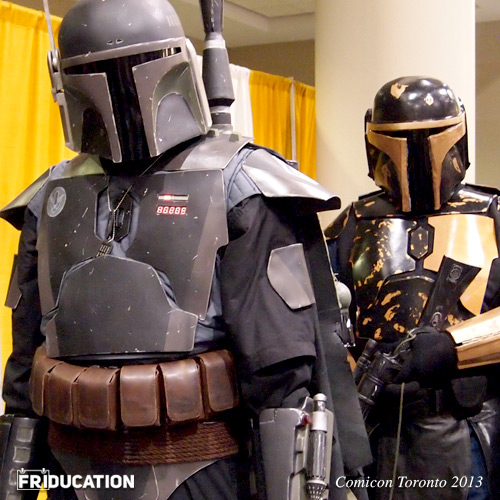