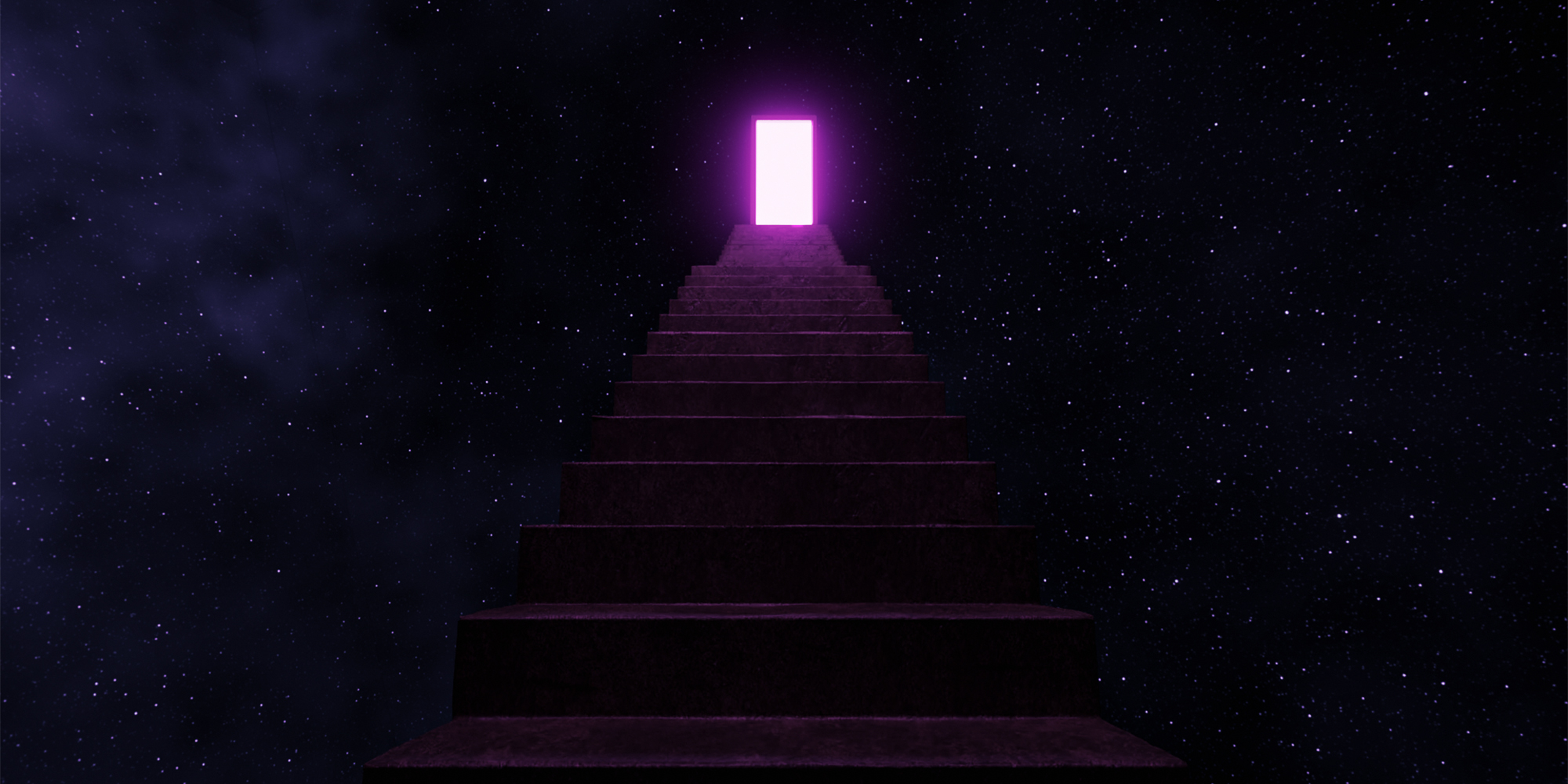 Written by: Liberty and Engage
Featured Image by: Adventure

Friducation returns to its roots

The team assembled on Wednesday June 30th 2021 for a Friducation weekly-wrap-up. It was the last thing on our plate before starting a four-day weekend, like a mini-Christmas break in July. The PD crew was treated to the return of an old pastime – the screening of an episode of Star Trek: The Next Generation.

What is this episode about?

Lower Decks (Season 7, Episode 15) is a study of relationships between senior and junior staff during crew evaluations. This episode is less sci-fi/action and more of a character study that explores leadership philosophies and workplace psychology. We’re introduced to four lower-ranked crew members and experience the story through their eyes, which allows us to see the senior staff – the familiar characters we know well – in a different light.

There is also a subplot around subterfuge and deceit, a reminder that while lies are occasionally necessary, they can be deadly.

The drama ignites between conflicting perspectives of decision-makers and subordinates. What’s the balance between ambition and respect for authority? Where is the line between obeying a command and questioning it? The episode tackles these questions and more by exploring different mentorship pairings. 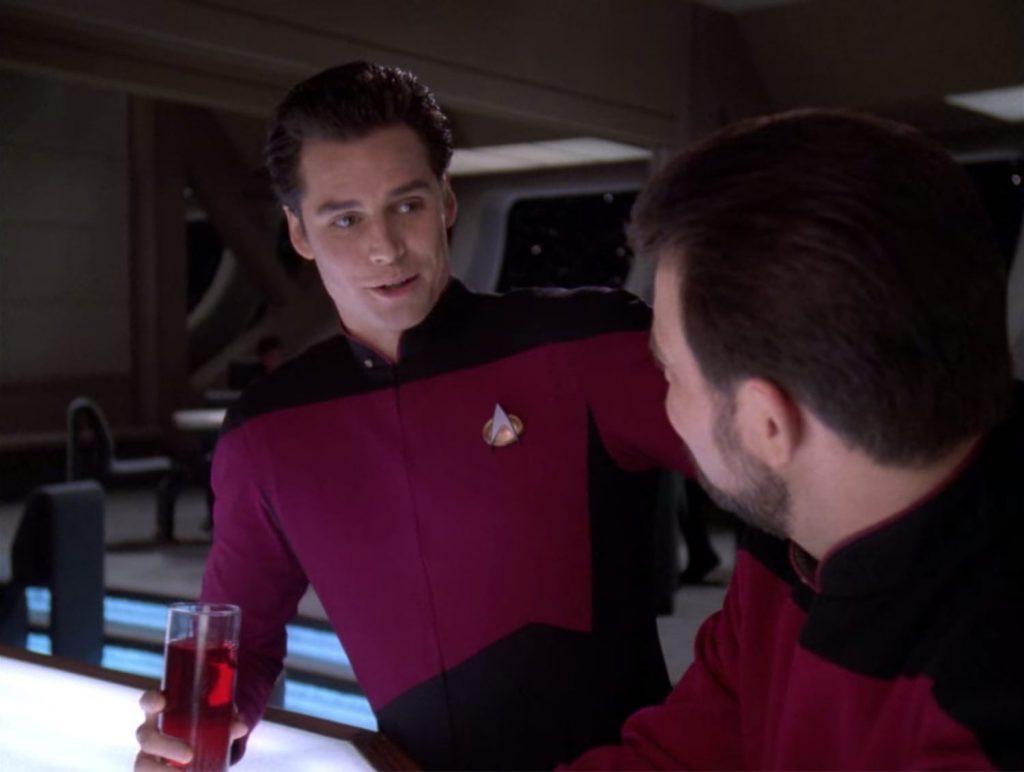 Ensign Sam Lavelle is egotistical and ambitious, focused on impressing his superiors and attaining a promotion. He makes the mistake of approaching Commander William Riker at the Ten Forward bar and puts his foot in his mouth while trying to ingratiate himself.

The twist is that Riker later realizes he’s giving Lavelle a hard time because the two are so much alike. An ego check for them both. 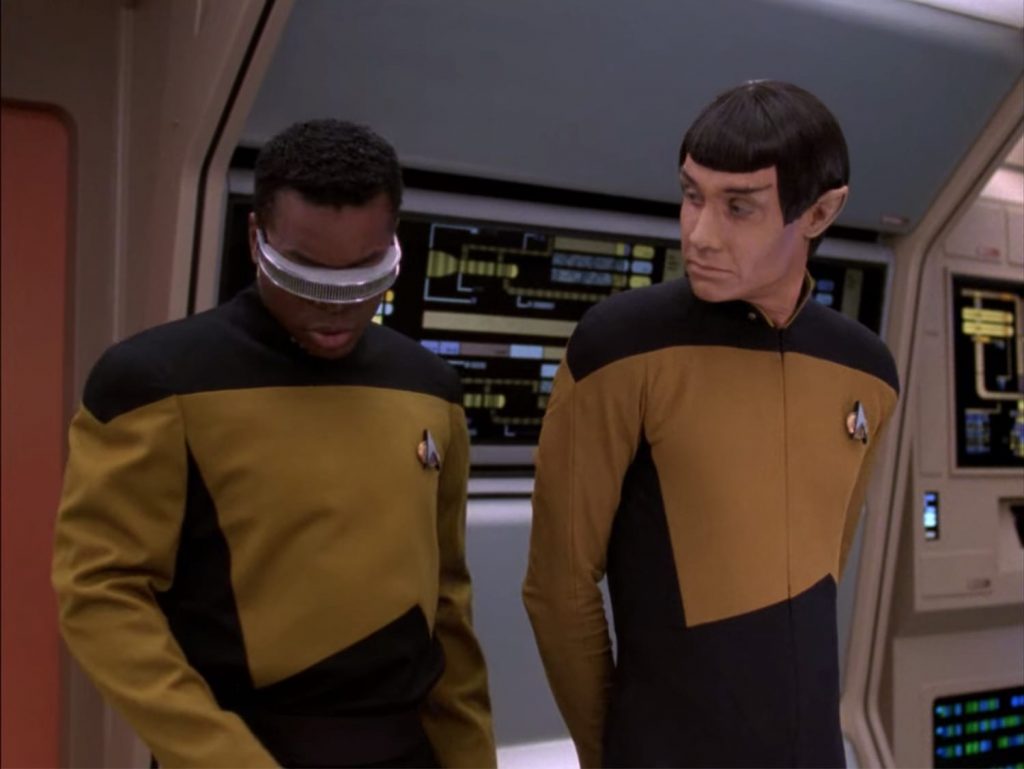 Ensign Taurik is a Vulcan assigned to engineering with Lieutenant Commander Geordie Laforge. Taurik uses his knowledge and logic to try to impress Laforge in the mistaken belief he is smarter than his mentor. The approach backfires as it makes him appear pompous.

This relationship is summarized as a student trying to out-think the teacher, finally learning the lesson that he’ll never be able to know everything. 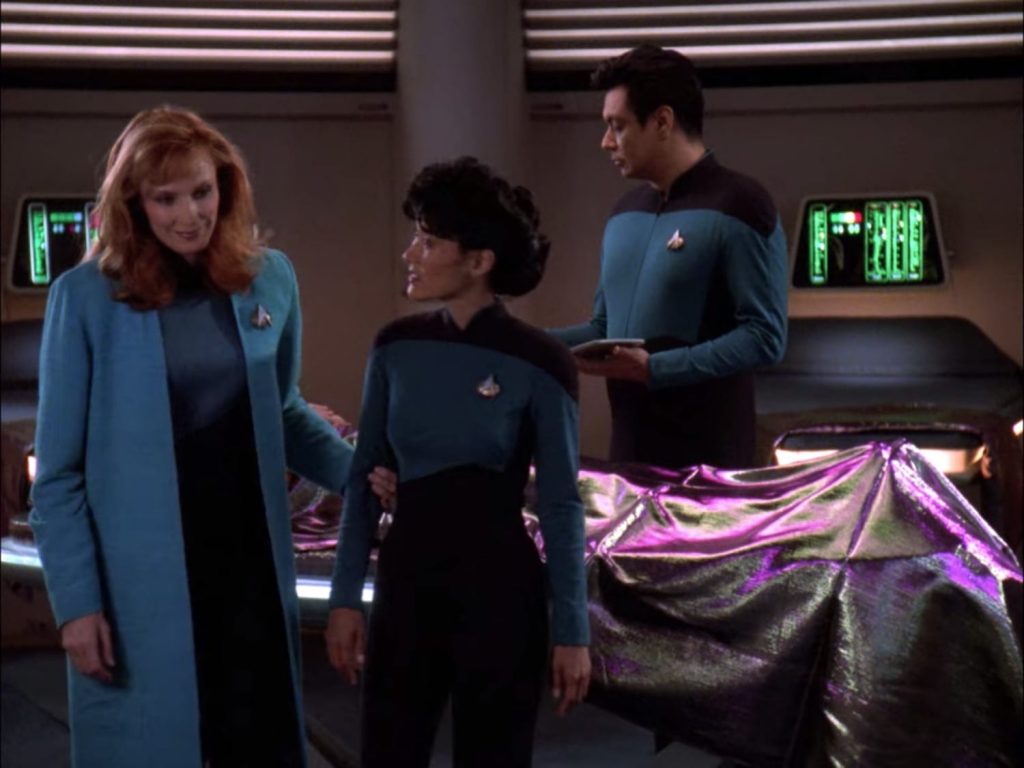 The ideal mentor and mentee relationship is portrayed with Nurse Alyssa Ogawa and her superior, Doctor Beverly Crusher. Nurse Ogawa’s diligence and sincerity have endeared her to Dr. Crusher, earning her a recommendation for a promotion.

But the most important aspect to their story is their ongoing discussions of Ogawa’s romantic relationship. Through this we learn that they have crossed the master and student barrier to become close friends. 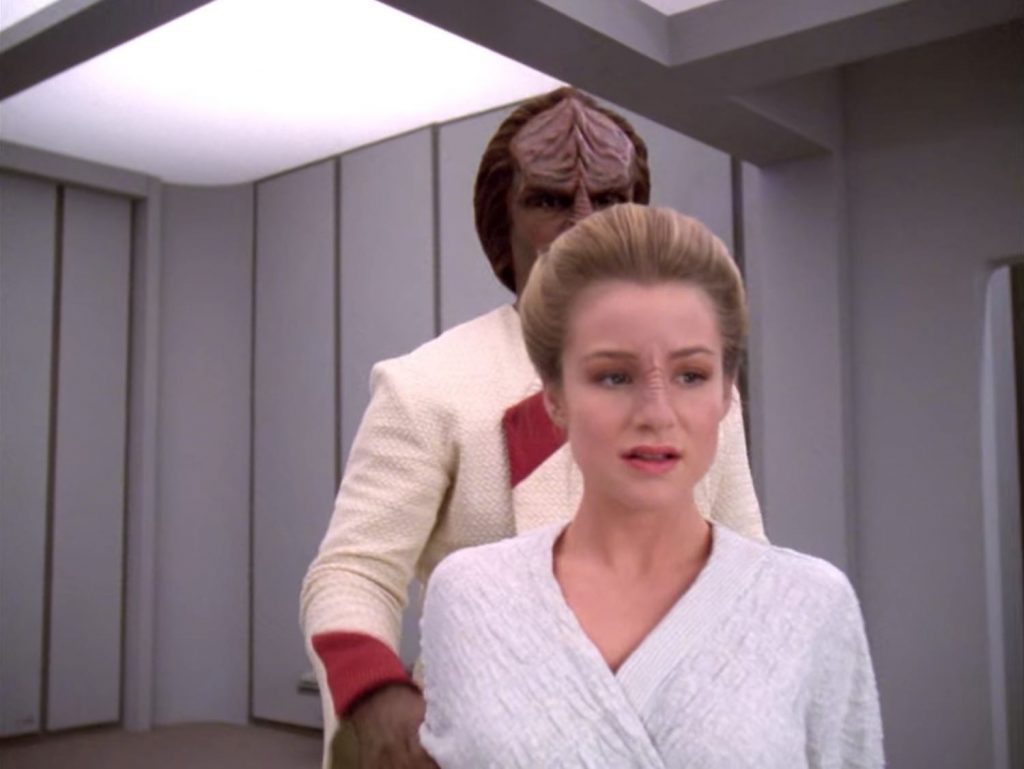 The main character of this episode is Ensign Sito Jaxa, who we have seen before when she was a cadet at Starfleet Academy in the season 5 episode The First Duty. Now graduated to an ensign, she is suitably paired with Lieutenant Worf. Both carry strong feelings of being outcasts amongst the crew. Sito for her part in a criminal cover-up as a cadet, and Worf being a consummate outsider due to his race and demeanour.

“Perhaps next time you are judged unfairly, it will not take so many bruises for you to protest.”
– Commander Worf

While engaged in a sparring match, Worf teaches Sito a great lesson in courage. To stand up for yourself, even when those that judge you are of higher ranks. 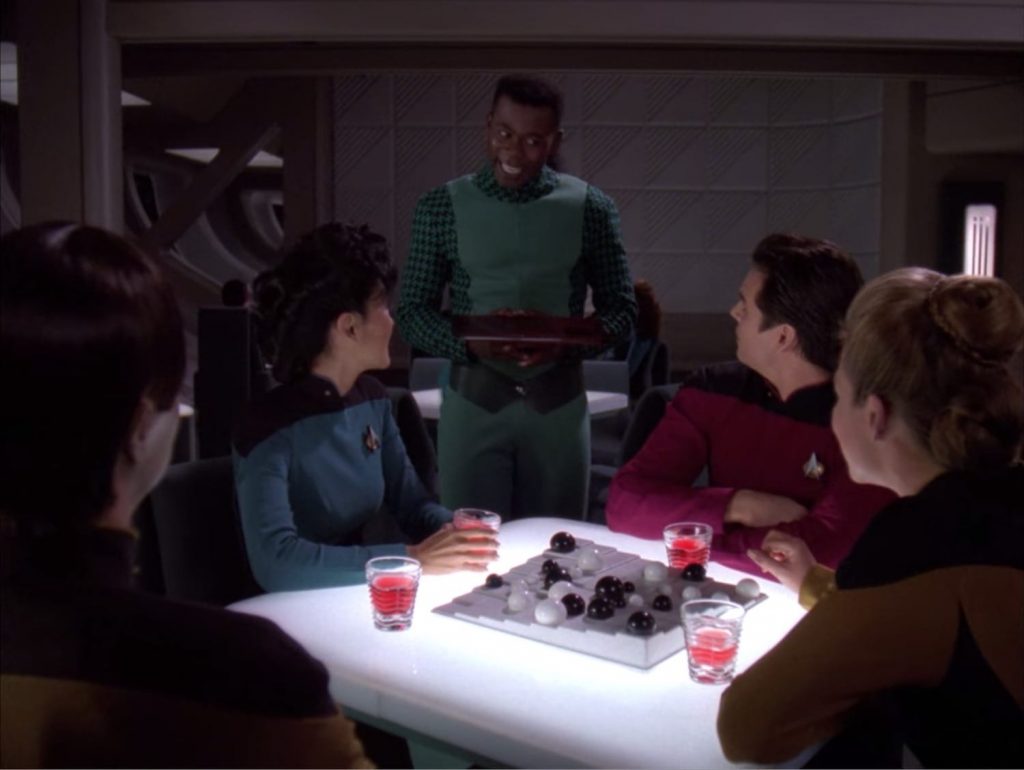 Although Guinan the bartender does not appear in this episode, her presence looms large in the actions of Ben, who is a waiter at Ten Forward. Ben appears to be content with his role, and as a civilian he is not bound by ranks. Much like Guinan, Ben is blessed with keen observation and networking skills. Like a spider-under-the-table or a fly-on-the-wall, he seems to know everyone and everything happening on board. Although unlike Guinan, Ben seems to engage in speculative rumors, he does so with a big heart.

Both Ben and Guinan go beyond merely serving beverages, they actually affect the lives of their patrons. 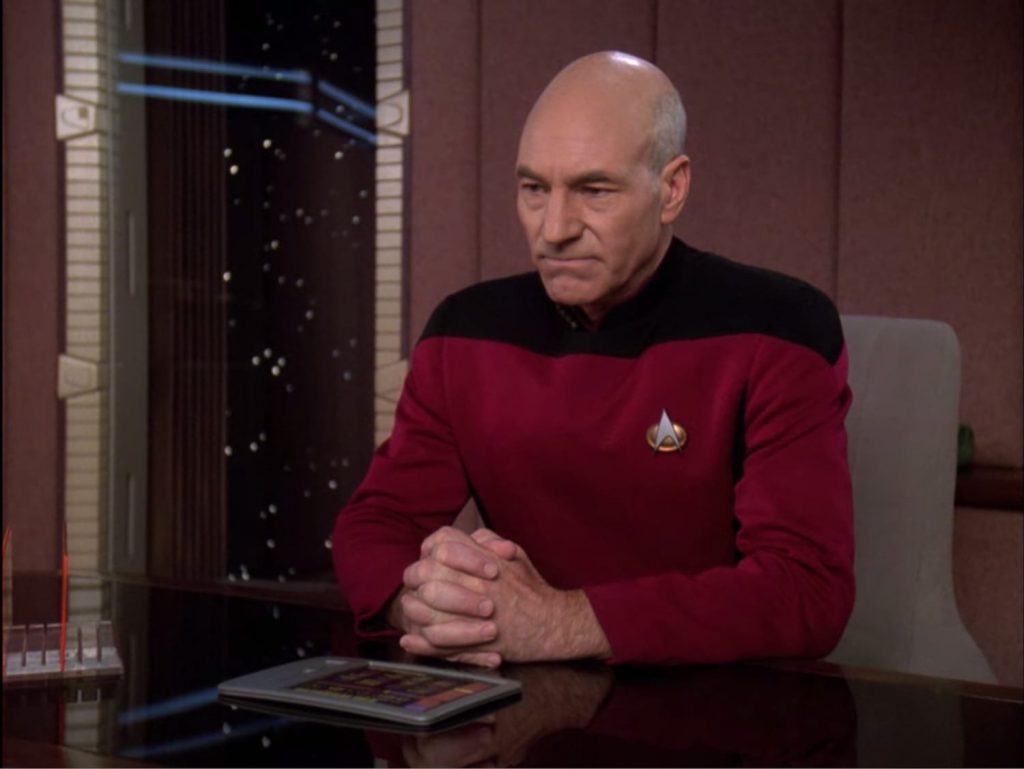 A mentor to both the seniors and juniors of the crew, Captain Jean-Luc Picard is central to the goings on of the ship. At first he appears displeased with Ensign Sito being onboard, then we learn that this is a calculated ruse to assess her for an important black ops mission. Not known for deviating from standard procedures, it becomes clear that this wartime deception is actually a mission for peace.

In this episode we get a glimpse at the decision making of the captain of the USS Enterprise. Heavy is the head that wears the crown. The lives of the crew are literally at stake when he makes executive decisions.

Why is this episode important?

This episode is, at its heart, a redemption story. Ensign Sito redeems herself by making the ultimate sacrifice while on a secret mission that requires her to lie. Ironically, Ensign Sito was introduced in a previous episode where the theme was that the first duty of every starfleet officer is to the truth. The storyline also serves as a crossover with the Cardassian-Bajoran conflict on the sister series Star Trek: Deep Space 9.

This episode is suitable for all audiences. Interns can relate to the episode’s junior officers who are starting their careers. Senior staff can relate to the role of mentors, and reflect on their own career paths. The quest for promotions seems to be universally relatable.

For Friducation participants who were new to Pixel Dreams or new to Star Trek, this was the perfect introduction. We had four first-time viewers who, based on their reactions, might get hooked. Thanks to Kal for reminding us of the close alignment between Pixel Dreams and Starfleet. We have watched this one before in 2012 and 2015, but the third time is even better.

This was a bold reintroduction to Star Trek: The Next Generation, getting our minds engaged and leaving us wanting more.