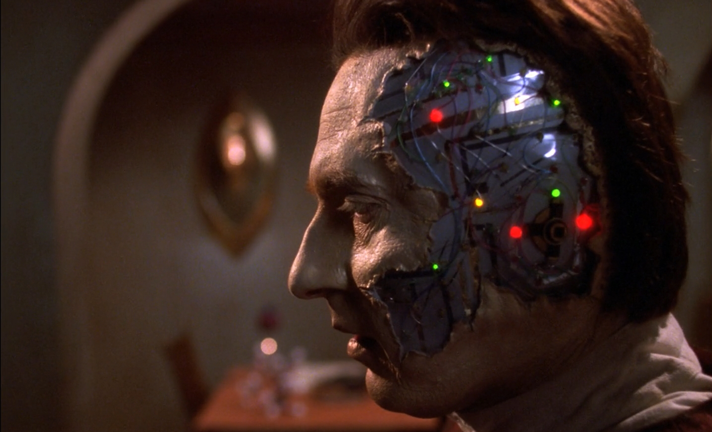 To revive our Star Trek tradition, the PD team gathered last Friday evening to watch an episode from the Star Trek: Next Generation series. We watched “Thine Own Self”, the 16th episode of season 7. Throughout the episode, two events take place simultaneously. One is Data being sent to recover radioactive remains of a deep-space probe that crashed on a pre-industrial planet. While back in the Starship Enterprise, Deanna Troi takes tests to get promoted to a bridge officer and become in command. “Thine Own Self” is an episode that highlights the importance of being true to oneself in order to lead and advance in our lives, while realizing the challenges and sacrifices that come along.

On his mission to recover the crashed probe radioactive remains, Data gets injured during his journey. Consequently, he loses his memory and walks into a village, carrying the case of radioactive parts, not remembering who he is or the mission he was sent to accomplish. He encounters the town magistrate, Garvin, and his daughter, Gia, who are startled by his unusual appearance and hazy memory. They decide to take him to the town healer, Talur, to help him recover his memory, so that they can know more about him and where he comes from.

Unaware of the hazardous effects of the radioactive metal pieces in the case, Garvin sells it to the town’s blacksmith. People in the village start wearing those metal pieces as jewellry, leading to most of them showing signs of radiation poisoning, which Talur fails to identify as she has never seen anything like it before. However, Data manages to cure the villagers by preparing an antidote for the poisoning, and putting the rest of it in the village’s well. However, still thinking Data is the cause of their illness, the villagers attack Data several times, first causing his mechanical innards to be exposed, then later impaling him by metal rod in a second attack and killing him.

While on the Starship Enterprise, Troi is taking the bridge officer’s exam, to get promoted to full commander and become in command of the bridge, which was fueled by a class reunion. Part of Troi’s exam involves an emergency in the engineering on the holodeck. Unable to solve the problem without putting anyone at risk, Troi fails the test three times. As a result, Riker cancels the rest of her test, and explains that his first duty is to the ship, which prevents him to allow an unqualified person to run the bridge.

However, Troi goes to the holodeck and realizes that even though fixing the source of the problem is a suicide mission, her first duty is to the ship. She orders holographic Geordi to perform the repairs that are in a hazardous area, sending him to his death. Troi receives the news that she has passed her test and has been promoted to commander.

At the end of the episode, Riker and Crusher arrive to the town, where Data has been buried, disguised as his friends. They know of Data’s fate, and beam his body and the metal fragments back to the Enterprise. On the ship, Data’s functions are restored, but he has no recollection of his mission and what happened in the village.

The power of being true to oneself

Originally, “thine own self” is a famous quote that was first coined by William Shakespeare, in his famous play Hamlet, in the third scene of act 1. Since then, the quote has been used a lot by psychologists, in modern language, by companies and organizations, and in shows like Star Trek. Although the contexts might differ, this quote holds many interpretations and impacts that can affect how we go around in our everyday life and interactions.

In being true to ourselves, we realize both our strengths, capabilities, authorities, as well as our deficiencies and shortcomings. As a result, we are able to better judge ourselves and if we have done what we should or could have. That was evident in many ways during the episode, in how Tulur lacked knowledge and misdiagnosed the symptoms, while Data was able to create the cure. Had the villagers seen the truth that he was trying to help them, they wouldn’t have attacked him and sacrificed his life.

Moreover, being honest to ourselves gives us a better understanding of who we are and wish to be, our ambitions, the things that matter to us, and our values in life. It means a healthier life with clear goals and a better ability to be honest, love, and communicate with other people. Being true to oneself dictates and greatly impacts how we behave, treat other people, get our jobs done, and achieve our goals in life.

The downside of truthfulness

To be true is also to admit and accept the truth about ourselves, weaknesses in our personality, and our lack of knowledge or skills. Although, being honest about these things might be difficult, it helps us determine if we are of benefit to the things we are committed and loyal to. Moreover, our truthfulness allows us to realize if we are fit to the role and tasks we are responsible of, if it is better to assign someone who is more knowledgeable and capable than us, and the things or people we have to sacrifice for the greater good or to advance in our positions.

The audience could feel the challenge and dilemma Troi had to go through throughout the episode. Only when she fully realized that her first duty is to the Enterprise, she became realistic about what it will take, whether it involves her not being in command, or sending someone to their death. Even though, every person might choose a different route, but they must take a stand and make a decision at the end of the day. We definitely admit that It is indeed as hard and challenging as it sounds, and often times requires us to swallow our egos and let go of our biases and perfectionism.

Living with no regrets

“Thine Own Self” is a quote with a lot of virtues, yet holds many vices within. As an episode, it was a great mind steering Star Trek episode, that leaves space for the audience to ponder on what they would have done, if they were in their shoes. One of its main takeaways is that it is inevitable in life that we will have to make such decisions, and get in conflict with people or organizations that might hinder us back. However, to live in harmony and with no regrets, we must be clear about what is our mission in life, and how do we get there. But most importantly, we must not let go of our values, always walk by them, and choose them over following agendas, while minimizing the damage and danger, as much as we can.