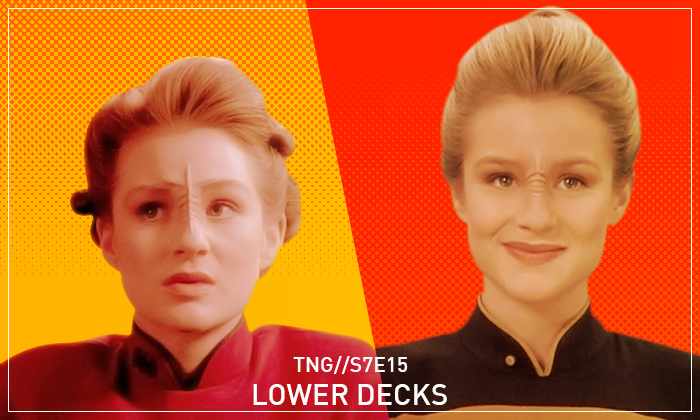 Last week Friday November 20th, our team watched two episodes. The second of the two was focused on junior officers sharing their hopes and anxieties for promotion, while speculating on the unusual directions taken by the commanding crew while near the enemy border. Egos are questioned and entitlements are put on blast. It was a thought provoking episode that went with Friducations theme of day: Coming of Age.

We all change, but it’s that critical moment when we lose a part of our innocence, that we shed former perspectives in exchange for new ones. It’s never easy and at times it can be very confusing. Pushing becomes pulling and vice versa. When does that happen? What will it sacrifice? It’s difficult to tell. But in the cases of ensigns Sam Lavelle, Sito Jaxa, Alyssa Ogawa, and Taurik, it was during the line of duty where they needed to adjust their ego’s to a purpose they’ve pledged to uphold. That pledge was to Starfleet and it’s principles.

For an intern like myself, life was about maintaining my resolve through resilience. Like Sito, I would tell myself that no matter how whack things went, I would tough it out and blame it on no one but my own inadequacies. But her scene with Worf taught me that it takes courage to question situations that may seem unfair. It shifted a point-of-view that made me ask, “how many times do I need to feel like I’m getting shited on before I start asking questions.” I’m guilty of confusing competence with being a pushover. For others it might be different, where taking initiative is being confused with overdoing. At the end of the day we should be cautious of our personal beliefs, because they might end up being obstructions that compromise the task at hand.

There are values to be learned from all of the ensigns featured in this episode. Below is a short description of each of their characteristics – can you relate to any of them?

Taurik is a young Vulcan. What that means is that he is naturally focused and efficient at his job, which makes one assume he can do no wrong – even himself. But underneath his calm demeanor is the ambition to exceed his superiors by being undeniably impressive. He provokes responses from Geordi by making unnecessary improvements and expects praise for it. His selfishness prevents him from being open to the possibility of a bigger picture. It’s a classic example of obstruction through overdoing it. His duty to the Enterprise is conflicted with his intent to express his talent.

A recurring character in the series, Alyssa Ogawa is completely competent and dependable. She doesn’t do anything to exceed her mandate and does what’s expected of her role, making her an efficient member of the Enterprise. She is valued for her consistency, which leads to the promotion of Lieutenant. But she is not without charm and personality. Ogawa knows how to socialize and shares some of her personal life and feeling with her commanding officer, Crusher. Even going as far as expressing concerns for her own relationships and asking for advice. Her balanced personality is what allows her to perform her duties without any baggage, while being likable as well.

Sito Jaxa is a character that made her debut back in S5E19. She made the choice of covering up a mistake that involved the death of a friend and team member, nearly leading to expulsion. With her every move constantly being questioned by everyone in Starfleet since the incident, she began harbouring the grit to be the best she can be in order to compensate what had happened. But she didn’t realize that the mentality led her to victimize herself. She takes the beatings and mistakes resilience for being a pushover. With the help of Worf, she learns to recognize and challenge the bullshit by justifying the beliefs in her own abilities. At this point she no longer becomes a victim, but a contributor to Starfleet.

Sam Lavelle is an overly anxious young ensign, with a brash and cocky attitude similar to Riker in his youth. He is desperate to make Lieutenant and isn’t shy about it. He’s open about his ambitions and does his hardest to achieve what he wants. But like many in the quest to impress, he ends up acting the fool.

His impatience makes him presumptuous, thinking that his commanding officer is intentionally making things difficult for him. But it’s his unapologetic and transparent attitude that makes him popular among his friends. Lavelle shares Sito’s self-victimization and Taurik’s need for praise, while aiming to be as valued as Alyssa. He also has a side of humbleness, which was evident in the wake of Sito’s death, where he questioned the the validity of his promotion. It’s these modular qualities that makes someone of his stature a potentially effective leader, just like Riker.