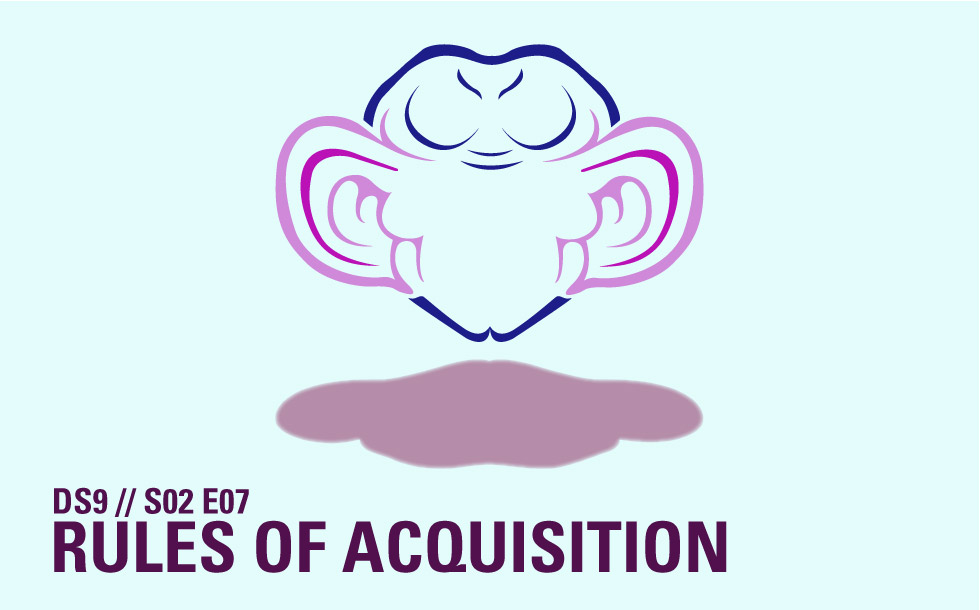 This episode tells the story of gender rights and equality in the Star Trek universe through the many references made to the Rules of Acquisition that Ferengi people live by. Zek, the Grand Nagus of the Ferengi Alliance, aims to establish a Ferengi business in the Gamma Quadrant by purchasing large amounts of Tulaberry wine from the Dosi (a species within the Gamma Quadrant). Zek appoints Quark as the main man to represent him in the negotiations with the Dosi regarding the Tulaberries. Quark asks Pel, one of his Ferengi waiters, to help with the discussions after seeing that he has sharp business acumen. What Quark doesn’t know is that Pel is actually a Ferengi woman disguised as a man. According to the Ferengi laws, Ferengi women aren’t allowed to wear clothing, earn money or leave Ferenginar, their home planet.

During the meeting with the Dosi, Quark and Pel fail to negotiate the requested vats of wine for Zek, which forces the duo to travel to the home world of the Dosi within the Gamma Quadrant to complete what is requested of them. Quark and Pel confront and try to negotiate with the Dosi whom they originally spoke with, but the Dosi continues to refuse the offer. After the duo speaks with another Dosi, they realize that Kel’s true intention behind purchasing 100,000 vats of Tulaberry wine is to contacting the Dominion, a powerful member within the Dosi. Upon confrontation, Kel actually admits to this and conceded that it’s the reason he was so adamant about these negotiations.

Towards the climax of the episode, Rom, Quark’s rejected and vindictive brother, discovers Pel’s true identity and informs Quark. Quark demands Rom not to tell anyone about Pel’s identity for it could ruin his career and reputation, but Pel ends up revealing her gender to Kel, regardless, while telling Quark that she has feelings for him. Kel becomes furious and threatens both Quark and Pel to be thrown into jail but soon realizes that he is equally as guilty for conducting business with a Ferengi woman. The group decides to keep Pel’s identity a secret and Pel departs the DS9 space station to start a new life in the Gamma Quadrant.

What’s really fascinating about this particular episode is that it tackled the subject of sexism and gender equality rights through the Ferengi Rules of Acquisition. Some of the rules presented in this episode are:

Rule #21 – Never place friendship above profit
Rule #22 – A wise man can hear profit in the wind
Rule #33 – It never hurts to suck up to the boss
Rule #48 – The bigger the smile, the sharper the knife
Rule #59 – Free advice is seldom cheap
Rule #62 – The riskier the road, the greater the profit

The episode also showed the oppression Ferengi women have to endure in order to fulfill their roles in their male dominant society. Even though Pel proved herself to be a natural in conducting business with the Dosi, at the end of the day she was only seen and judged by her gender.