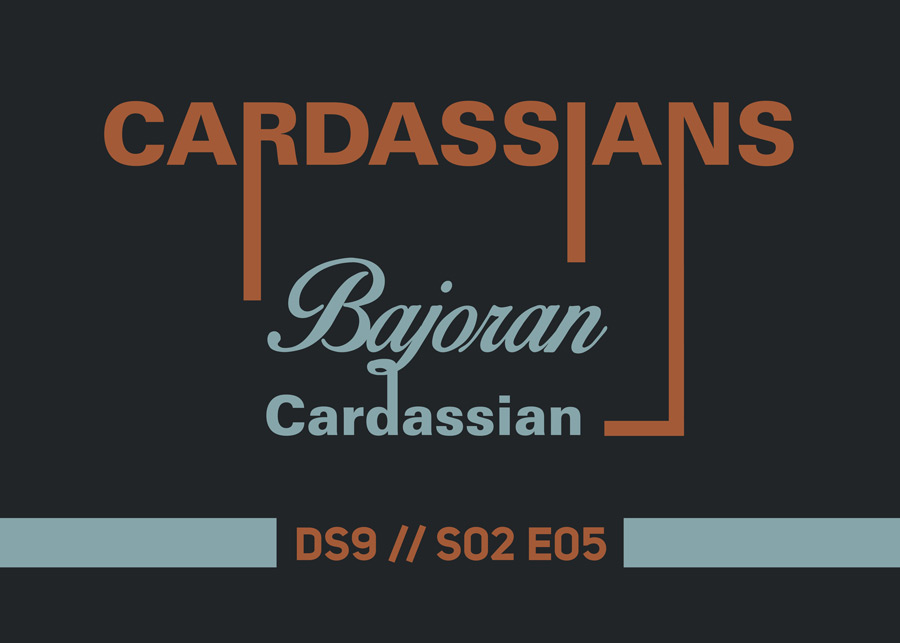 This episode started off simple enough – Garak and Bashir spending time together, enjoying a meal. Things took a very weird turn when   they went to say hello to a new Cardassian boy, Rugal – he ended up biting Garak’s hand. Yes, he bit him, teeth and all.

We soon find out that the reason he bit Garak is because of his adoptive Bajoran parents who have bred him to fear and hate Cardassians. Let’s keep in mind that he himself is a Cardassian. An investigation launches into the family after Bashir speaks to a third party and learns that there is a possibility that the boy has a past of abuse.

Though the family denies these allegations and claims that they don’t even consider Rugal a Cardassian, he is taken to live under the care of the O’Briens for the remainder of the investigation. This is funny in itself because Miles has a known dislike for Cardassians – something Rugal helps him overcome through the time they spend together.

While this is unfolding, Sisko gets contacted by Gul Dukat who has gotten word of that there’s an orphaned Cardassian boy on board. Gul Dukat claims that he’s trying to get all of the orphaned Cardassians back from Bajor and that this incident with Rugal is actually a blessing in disguise. The audience knows they shouldn’t believe him, but they don’t know why – not yet, at least.

Garak, on the other hand, knows why he shouldn’t believe Gul Dukat and though he won’t shed any light on the matter to Bashir, he wants them both to go to Bajor and investigate. Sisko is beside himself when Bashir requests a runabout to go to Bajor even though he has no idea why they’re going and what they are going to do when they get there. Sisko changes his mind soon after when Gul Dukat reveals that Rugal belongs to a Cardassian politician named Kotan Pa’Dar who happens to be his political arch-nemesis. With the permission of the captain, Garak and Bashir embark on their journey to Bajor.

Once they arrive, they make their way to an orphanage that took in many Cardassian children when the Occupation of Bajor ended. After retrieving the information from the orphanage’s database, they head back over to the station. Unfortunately, it isn’t a pleasant ride as Bashir’s curiosity and frustration catch up with him. Finally, after Bashir practically yells at him, Garak points out that the situation is more about the conflict of military and civilian interests on Cardassia between Gul Dukat and Pa Dar than the biting incident. I want to say that Bashir understands the situation after this revelation, but he really doesn’t. At least he’s trying.

Back on the station, Pa ‘Dar has arrived to retrieve Rugal and take him home but things don’t go as he plans. Though Pa ‘Dar blames himself for what happened to Rugal and obviously feels guilty, his son does not hold anything back when they meet and calls Pa ‘Dar a “Cardassian Butcher”. Clearly they have some things to work out.

Though deeply hurt by Rugal’s comment, Pa ‘Dar is still adamant about taking him back home though his adoptive father refuses to let that happen. Sisko is soon called to be the arbiter between Rugal’s adoptive father and Pa ‘Dar and they decide to hold a hearing to decide who gets the boy. Before the hearing begins, a special guest arrives on the station – Gul Dukat. His reason for coming to the station is to fulfill his promise that he will be bringing Cardassian orphans back to Cardassia.

Soon after the hearing begins, it’s interrupted by Bashir with new information that changed the outcome of the hearing. It turns out that Gul Dukat planned to leave Rugal behind in full knowledge that it would one day be found out that he is Pa ‘Dar’s son. But why go through the difficulty? Because Gul Dukat knew it would harm Pa ‘Dar’s political career. What better way to destroy the person who ordered the Cardassian withdrawal from Bajor during Gul Dukat’s career peak as prefect?

After this unfolding of events, Pa ‘Dar is granted custody of Rugal and though it will be a long time before they overcome the boy’s hatred for his own kind, it’s a happy ending for them both. Dukat on the other hand, sees everything backfire and knows his mouth must remain shut unless he wants to suffer political embarrassment for his part in the whole ordeal as well.