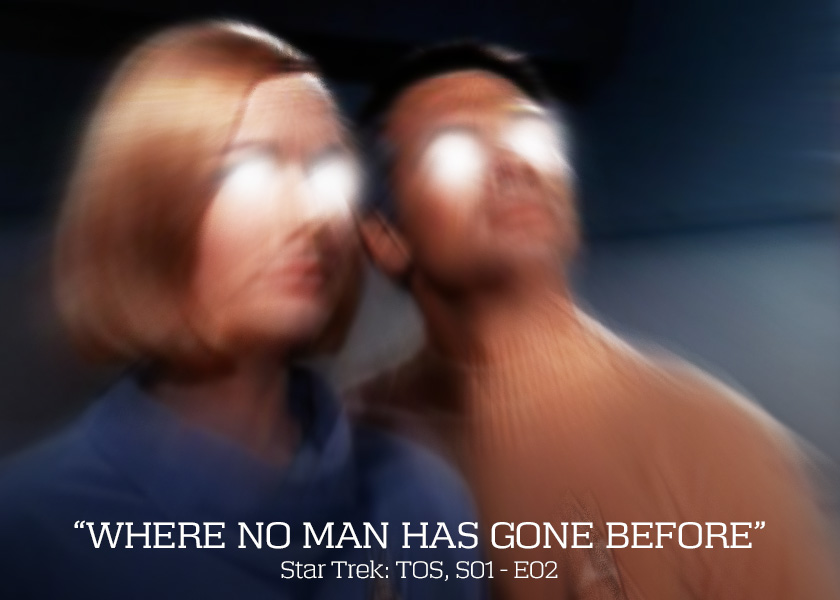 Star Trek: The Original Series
Title: Where No Man Has Gone Before
Season: 1
Episode: 3

Next we watched an episode with a title made famous during every Captains Log intro. This one started with the crew recovering a recorder from a lost ship the SS Valiant. The records show the Valiant was urgently searching for information about ESP or extra-sensory-perception before self-destructing. The Enterprise gets trapped in a cloud of purple space smog where Lt. Comm. Gary Mitchell and psychiatrist Dr. Elizabeth Dehner get struck and the ship gets damaged.

Mitchell seems to have developed an eye condition and unusual powers like speed reading, memorizing, reading minds, and pushing physical objects with his mind. Dr. Dehner is sent to study Mitchell. With the Enterprise trapped and Mitchell’s abilities increasing geometrically Mr. Spock advises Captain Kirk of two options; Leave Mitchell stranded on an uninhabited planet Delta Vega or kill him before he becomes too powerful.

“Don’t you understand a mutated superior man could also be a wonderful thing, the fore-runner of a new and better kind of human being.”
Dr. Dehner

Both episodes featured similar scenarios, antagonists dealing with newly acquired God-like powers and the Enterprise crew facing the fallout. These episodes actually aired as the 2nd and 3rd episodes of Star Trek in 1966 although according to production lore Charlie X was the 8th episode filmed and Where No Man Has Gone Before was actually the 2nd pilot, produced after The Cage wasn’t picked up. Both episodes taught us to watch out for eyes after seeing Charlie’s roll back and Gary Mitchell’s glazed-over shine when doing bad.

Though most importantly for Friducation was the lesson about individual greed or the pursuit of power affecting the overall company. So let’s all remember to use our special abilities for helping the good-guys.