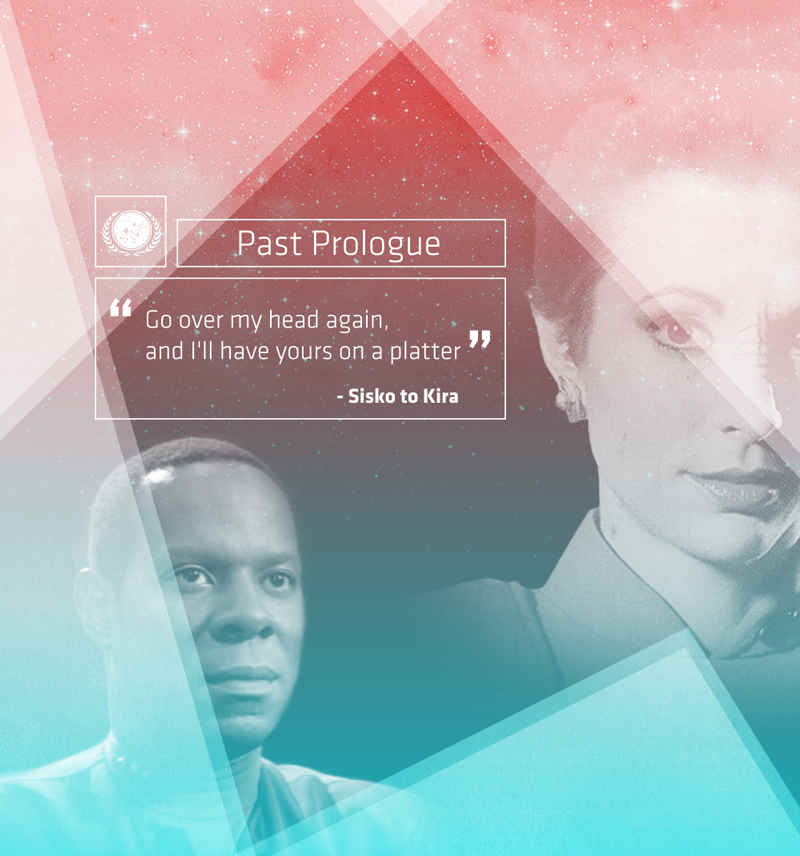 The crew of Deep Space Nine rescue the Bajoran Tahna Los from his failing vessel that is being attacked by the Cardassians. The Cardassians state that Tahna is a known member of the terrorist organization, the Kohn-Ma, and request his return, but Tahna attempts to gain political asylum, pleading to his former friend Major Kira for help and vowing to leave the Kohn-Ma. Commander Sisko grants the asylum.

Later, Odo spots Tahna with the Duras sisters making covert discussions. Tahna also seeks to gain the use of a runabout from Kira. Dr. Bashir, thanks to his new-found friend Garak, overhears the Duras sisters planning to rendezvous with Tahna near Bajor 8’s moon to give him materials that could be used to build a bomb. However, the staff is unable to prevent Tahna from doing anything without material evidence, but instead allow him to take a runabout and to arrest him after the transaction. Kira finds herself confused about her own past with the Kohn-Ma and where her current loyalties stand, and offers to go with Tahna with the runabout.

Commander Sisko and Chief O’Brien wait on the far side of the moon while Tahna, along with Kira, complete the transaction. When the second runabout appears, Tahna realizes he has been set up; matters are further complicated by the arrival of the Cardassian warship. Tahna orders Kira at gunpoint to return to the station, intending to collapse the wormhole with an explosive device, because then Bajor will have no motivation to invite Federation presence on Bajoran territory (Tahna sees Federation as a new occupation, foolishly invited by the Bajoran government).

But Kira lurches the runabout to one side, causing Tahna to fall over and allowing her to pilot the ship through the wormhole to the Gamma Quadrant; there she ejects the bomb causing it to explode harmlessly. However, Tahna has regained control of his weapon and orders Kira to return to the Alpha Quadrant. There, Sisko gives Tahna an ultimatum, either to give himself over to the station’s authorities, or to wait to be destroyed by the Cardassians. Tahna hands over his weapon to Kira, and turns himself in; Kira explains that he may come to understand why this was the right thing to do someday.