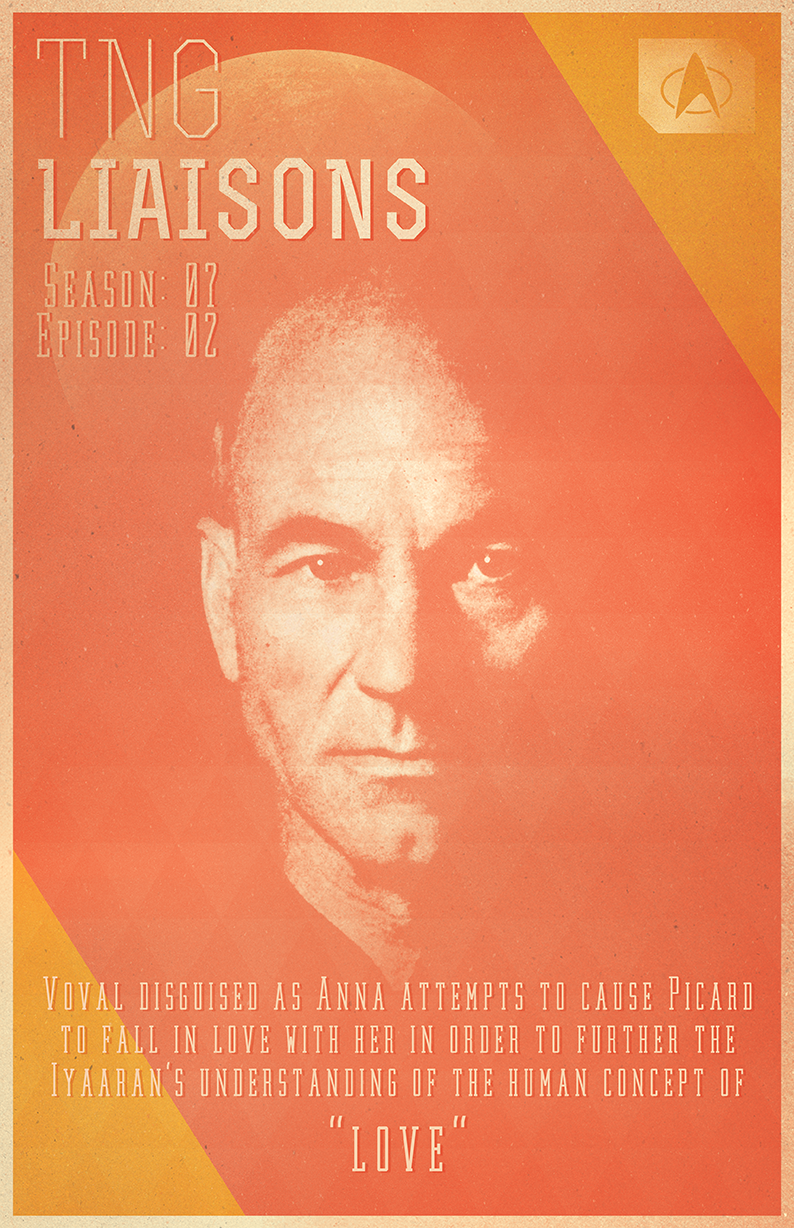 The Enterprise welcomes two Iyaaran ambassadors, Loquel and Byleth, who are visiting the ship as part of a “cultural exchange” that will also send Picard to their planet. Before Picard departs, he assigns Troi to act as Loquel’s liaison and asks Riker to do the same for Byleth. But Byleth has other ideas, and instead demands that Worf serve as his shipboard guide. Soon afterward, Picard departs for the Iyaaran home world with Voval, the Iyaaran shuttle pilot, who is gruff and uncommunicative. Their awkward silence is disrupted by a malfunction aboard their ship. Crashing on an unknown planet, Voval receives a concussion, but Picard is seemingly unhurt. He decides to seek help outside, but falls to the ground trying to traverse the planet’s stormy surface. While he lies unconscious, someone silently drags him away.

Picard awakens on the distant planet in a small, dimly-lit cargo cabin. He is approached by a solemn, attractive human woman who informs him that Voval did not survive the crash. Picard learns that the woman’s name is Anna and that she is the sole survivor of a Terellian cargo freighter crash that occurred seven years before. After Anna tells him that he has three broken ribs, he sends her to retrieve the shuttlecraft‘s com panel to send a distress signal, but she accidentally destroys the transmitter module while removing it. Picard is then shocked when Anna suddenly kisses him and tells him she loves him.

Back on the Enterprise, Worf has had about all he can take of his abrasive, demanding guest. Riker decides that the tension might be eased by a “friendly” game of poker. The game is anything but “friendly,” and Worf realizes that Byleth is stealing chips. Before long, Worf loses control and, despite Riker’s insistence that he calm down, attacks his guest. But instead of getting angry, Byleth is pleased. He expresses admiration for Worf’s display of anger and politely excuses himself to document the experience, leaving everyone confused (with the exception of Loquel, who is still reveling in his dessert).

Meanwhile, Picard becomes enraged at Anna when he realizes that his ribs are not really broken, and the woman, who continues to beg for his love, is actually holding him captive. He angrily alerts Anna to his discovery, at which point she becomes distraught over failing to gain his affection and rushes out the door, breaking off her necklace. Picard runs out to find her, only to encounter Voval, who is very much alive.

Voval explains that he only appeared to be dead because, when Iyaarans are injured, their metabolic rates slow down in order to promote healing. He and Picard set off in search of Anna, eventually separating. Picard finds her at the edge of a cliff, threatening to commit suicide if he does not tell her he loves her. When he notices that Anna is again wearing her necklace and that Voval has again disappeared, Picard senses that something strange is going on and tells Anna to go ahead and jump. At that moment, she transforms herself back into Voval, who explains that he is not really a pilot, but an Iyaaran ambassador. He staged the crash in order to study the emotion of love, non-existent on the Iyaaran homeworld, by using Picard as a subject. Similarly, Loquel and Byleth were sent to experience pleasure and antagonism, respectively. Picard is taken aback at first, but upon returning to the Enterprise, acknowledges the experiments of the three ambassadors as being productive.

Upon their departure, Worf and Byleth inform Riker of their marathon eleven-hour session in the holodeck doing battle exercises, which has enabled Byleth to explore the concept of “antagonism” in a less destructive manner. Loquel offers a sampling of Iyaarian nourishment to Troi as a token of his appreciation, but apologizes that it is not as delicious as the dessert he has enjoyed while in Troi’s company. Troi accepts the food, stating that the volume of dessert they have consumed has surpassed even her threshold, and she will be quite content to eat something bland.