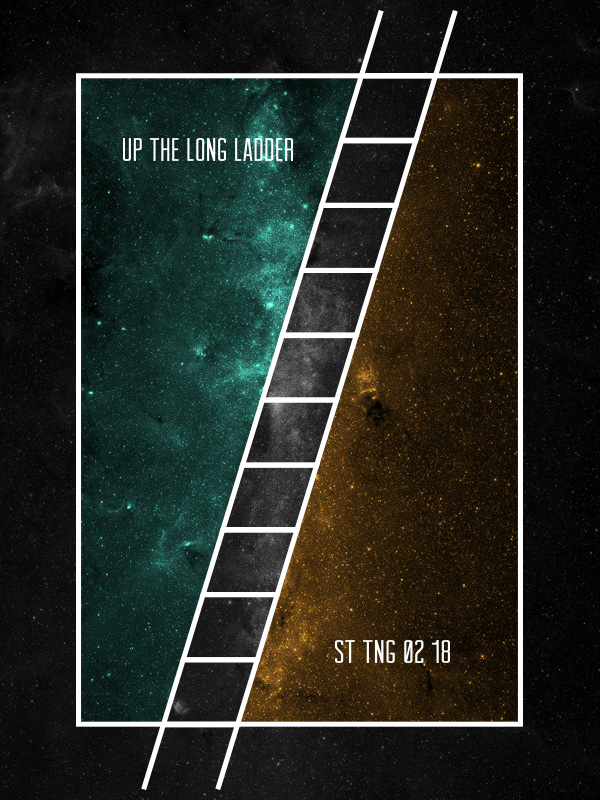 The USS Enterprise-D receives an automated distress call from satellites orbiting a human colony on the planet Bringloid V, which is in danger from solar flares from its star.

The colony turns out to have been founded by the crew of the SS Mariposa, a DY-500 class cargo freighter launched from the Baikonur Cosmodrome, USSR, Earth on November 27, 2123 under the command of Walter Granger, and destined for the Ficus Sector.

The “Bringloidi” colony, now led by an Irishman named Danilo O’Dell, are followers of an early 22nd century philosopher who advocated returning to a pre-industrial rural lifestyle – a farming lifestyle. When taken aboard the Enterprise-D, the colonists are at first amazed by the 24th century technology on the ship, but they quickly adapt to it.

When the colony has been rescued, O’Dell informs Captain Jean-Luc Picard of another colony, also descended from the Mariposa. Flying to a star located half a light year away, the Enterprise-D also visits this colony, which has taken to calling itself Mariposa. A “descendant” of the original Walter Granger, Prime Minister Wilson Granger, is happy to see the Enterprise and welcomes them to visit.

The Mariposa colony is strikingly different from the Bringloidi colony. The Mariposa colonists have kept their advanced technology, but when the colony was founded, there were too few survivors from the ship crash to establish a stable gene pool. This caused the Mariposans to turn to cloning instead, strongly rejecting biological reproduction, and as a consequence, any sign of intimacy. For almost three centuries, every Mariposan has been a clone derived from one of the five original colonists, and now the colony is in danger of dying out because of replicative fading: genetic errors will soon cumulate into a terminally fatal stage, making all subsequent clones nonviable.

The Mariposans ask the Enterprise-D crew for a sample of their DNA, so they could create new clones. The crew refuses, so the Mariposans kidnap Commander William Riker and Doctor Katherine Pulaski to steal their DNA. When Riker and Pulaski find out, they visit the colony’s cloning labs and destroy the new clones.

An alarmed Wilson Granger once again turns to Picard and his crew. Doctor Pulaski tells them they must cease cloning and need a new breeding stock for a viable gene pool. The Bringloidi colonists would serve as a perfect source for this gene pool.

Under urging from Picard, Pulaski and Riker, the members of both colonies agree to integrate the Bringloidi and Mariposa colonies. However, monogamous marriage will be temporarily suspended, to ensure fast development of a healthy, sustainable new generation. Because of the limited gene stock in the second colony, Dr. Pulaski suggests that each woman have a child by at least three different men.