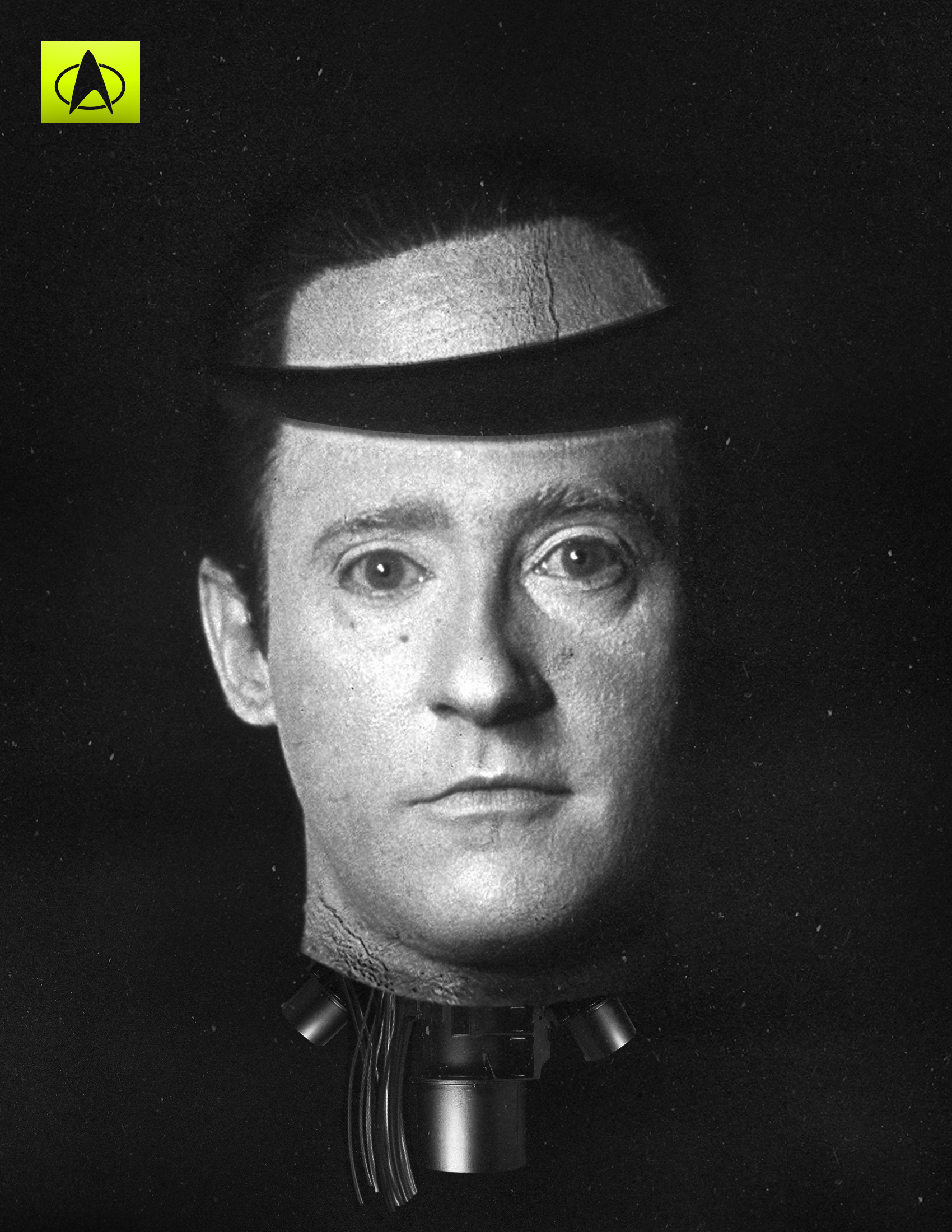 Data sees three workmen destroying a warp plasma conduit. He tells them to stop and, after he speaks, he emits a high-pitched sound through his mouth. The workers tell him to be quiet, then attack him and tear him limb from limb. As Data’s head is violently torn off, he suddenly wakes up in his bed.

The USS Enterprise is leaving a starbase after installing a new warp core. Captain Picard has been invited to the annual Starfleet Admiral’s Banquet on Starbase 219 and says that, after six years, he’s run out of excuses to avoid the boring event.

Meanwhile, in engineering, Data can’t stop talking about his nightmare. In the nine months since he had activated the dreaming program, he has had 111 dreams, but only one he could call a nightmare. Geordi assures him that nightmares are normal and being preoccupied with them is also part of the human experience. Geordi and Data attempt to activate the new warp drive, but they run into problems and the Enterprise is delayed for several hours.

In his quarters, Data observes his cat sleeping and wonders what Spot dreams about. Counselor Troi visits Data to talk about his nightmares, and encourages him to continue with the dream program.

Data dreams. He’s in Ten-Forward, and Worf is nearby, enjoying a piece of cake. Data asks what kind of cake it is. “It is a cellular peptide cake,” Worf says, “with mint frosting. Would you like a bite?” Data declines, and his attention turns toDr. Crusher and Riker. Riker has a straw coming out of his head, and Crusher is drinking something out of it. There’s a telephone ringing in the background. “Aren’t you going to answer that?” Riker demands. The workmen are also there, and again Data emits the high-pitched scream. They tell him to be quiet, and he shuts his mouth. One hands him a knife, and he cuts at a cake in the shape of Counselor Troi. Troi pleads with him to stop, but he doesn’t.

Troi, Worf, and Geordi wake Data up and tell him he’s overslept. “That is not possible,” he says, but it has happened nonetheless. Geordi supposes that perhaps it’s part of the program, that Data is supposed to oversleep at times, as part of the human experience. Geordi asks about Data’s dreams and comments that the imagery must have been strange. “Strange,” Data says, “is not a sufficient adjective to describe the experience.”

Data consults a holographic depiction of Sigmund Freud on the holodeck but, after the psychologist comes up with an irrelevant theory (saying the nightmares related to Data’s desire for his mother, though Data had no mother), Data leaves.

Admiral Nakamura calls the Enterprise, demanding when Picard will arrive for the banquet. The captain assures him he will be there on time. Shortly afterwards Geordi and Data again try to activate the warp drive, but there’s another problem and the Enterprise is adrift.

In engineering, Data sees dream imagery while he’s awake. He sees a ‘mouth’ on Geordi’s neck, and the engineering tool he holds looks like the knife with which he cut the ‘cellular-peptide cake’. He hears the telephone ringing again and Riker appears with a straw in his head, ordering Data to “answer it”. Data opens his own chest and picks up the telephone receiver. “Hello?” he asks. “Kill them. You must kill them all, before it’s too late.” It is Freud’s voice. Data “awakens” and wonders how it is possible that he is having daydreams. Later, Data attacks Troi with a knife in a turbolift. Riker and Worf find them. Data claims that he saw another mouth on Troi’s shoulder, and he had an uncontrollable urge to eliminate it; he is confined to quarters, which he remarks is a wise precaution. (After Worf escorts Data to his quarters, he asks a personal favor: for Worf to take Data’s cat, Spot, to Worf’s quarters for safekeeping.)

Dr. Crusher treats Troi’s injuries, and discovers a creature on her shoulder. Crusher determines that the Enterprise is infested with interphasic (IP) organisms which are feeding on the cellular peptides of the crew’s cells. Each person she scans has a creature attached to him or her somewhere, and they can be seen only in the light of an IP scanner. The crew don’t know how to destroy the creatures but, if they don’t, the cells of their bodies will disintegrate. Picard thinks the creatures may be connected to Data’s odd behavior because their locations correspond to objects in Data’s dreams. (Riker’s is on his head, in the same place that Data previously ‘dreamed’ the straw to be.) They decide to connect Data to the holodeck, so they might observe his dreaming.

Once there, Geordi and Picard observe Data, who again finds himself in Ten-Forward, and then in Sigmund Freud’s office. The three workmen are there, again dismantling a plasma conduit (which Geordi recognizes as one that was recently replaced with the new warp core). Data makes the shrieking sound, which, Picard notes, immobilizes them. Data wakes up and says he knows how to get rid of the parasites. He reconfigures his brain to emit an interphasic pulse, and the creatures are killed.

Geordi explains that the new warp core must have been infested with the interphasic organisms, and that’s why they had so many problems initializing it. He will have to construct a new conduit. It will take at least six hours, which means that Picard lucks out of attending the admirals’ banquet once again.

Troi visits Data and brings a snack: a cake in the android’s shape. “I wonder, what would Doctor Freud say about the symbolism of devouring oneself,” Data says. “Data,” Troi responds, smiling, “sometimes a cake is just a cake.”