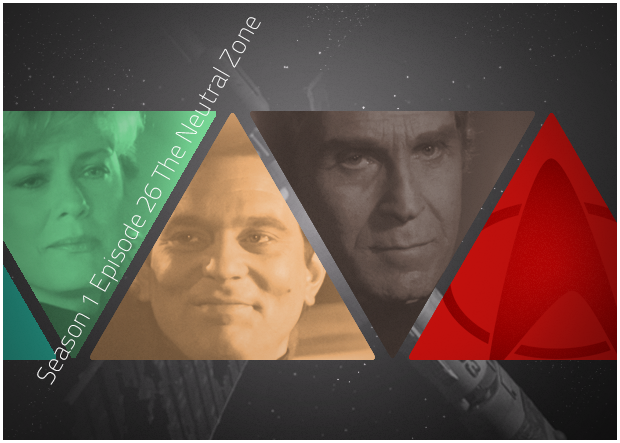 While Captain Picard is away at an emergency Federation conference, the Enterprise crew discovers an ancient space capsule from Earth. Inside they find twelve cryonic chambers occupied by humans, only three of whom survive. Data offers to move the survivors to the Enterprise and Commander Riker agrees.

Picard returns and orders the Enterprise to the Neutral Zone, as several Federation outposts nearby have not responded to communications. He explains that the conference was about the potential threat of the Romulans, docile for the last several decades on the other side of the Zone. As Data and Dr. Crusher work to thaw the cryonic survivors, Picard admonishes Data for bringing them aboard during a crucial time, and puts Riker in charge of them.

The three humans – Claire Raymond, a housewife; Ralph Offenhouse, a financier; and L. Q. “Sonny” Clemmons, a musician – are from the late 20th Century. All had died of incurable illnesses. They were placed in cryogenic suspension after their death in the hope that a cure might be found in the future. Dr. Crusher, in reviving them, successfully cures them of their illnesses. They deal with the culture shock of awakening in a distant future, while Counselor Troi searchs for the living descendants of Claire. Of the three, Clemmons seems to fare the best at adapting to life in the future – he befriends Data and refers to his predicament as, “the same dance, it’s just a different tune.” Raymond is distraught at the thought of losing everyone she ever knew, particularly her children. Offenhouse is irritated by the loss of his wealth, and lack of access to news or other information. He demands to see Captain Picard. Picard assures him that all questions will be answered “in good time”, but that their current situation is very tense and requires Picard’s full attention.

The Enterprise reaches the Neutral Zone and confirms that the outposts have been destroyed. They are soon met by a Romulan Warbird, whose Captain questions why the Enterprise is near the Neutral Zone. As Picard tries to explain his actions, Offenhouse arrives on the bridge and threatens to disrupt the tense situation, though he correctly states that the Romulans are seeking answers but are “….too arrogant to ask.” Picard and the Romulan Captain agree to pool their resources to discover the culprit. Picard later comments that while the encounter went favourably, the Romulans may be a significant threat in future engagements. Picard arranges to transport the 20th-Century humans to Earth, where one of Raymond’s descendants lives. Clemmons expresses enthusiasm for the future, but Offenhouse has no idea what to do in a world that no longer has use for his skills and asks Picard what challenges are left. Picard responds, “The challenge, Mr. Offenhouse, is to improve yourself. To enrich yourself. Enjoy it.”