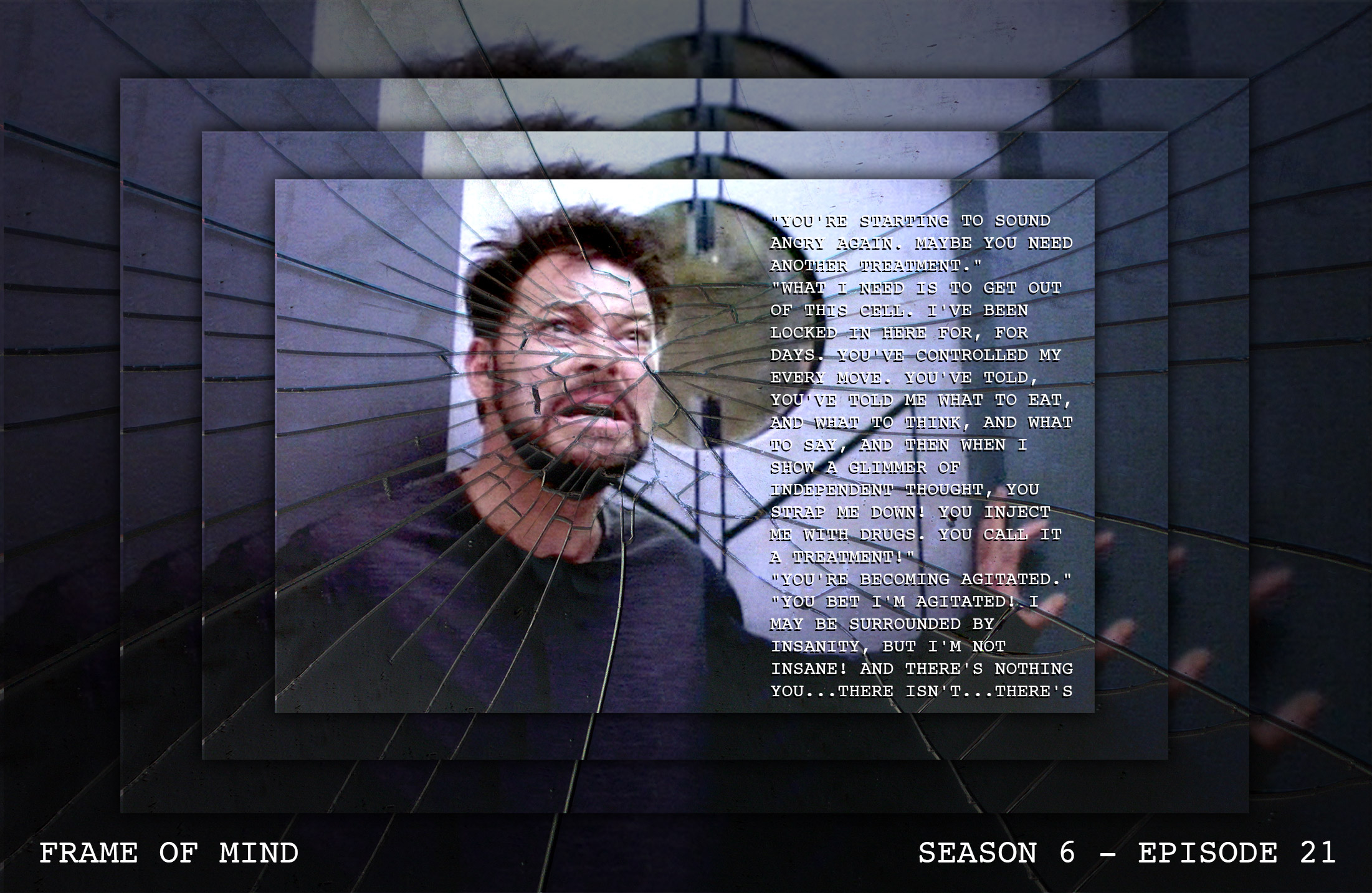 Riker goes all Insane in The Membrane in this one. In the process of rehearsing for a play to be performed for the crew of Enterprise he injures himself. The play, entitled “Frame of Mind” centres around his characters journey in a mental asylum. In an undoubtedly intentional ironic twist there is a soliloquy regarding the nature of being sane. THe performance is uniformly well received but for one man in the audienced who frowns at the performance. Riker, as if teleported there goes from stage to a real life cell. An alien humanoid doctor iterates “I see we still have much work to do”, a line from the play, before locking Riker in the cell.

Then things get weird (as if they weren’t already). Riker is taken to the asylum cafeteria, reminded that he is there because he killed a man. Disturbed by this Riker goes all other worldly. But no intergalactic rage can match the awesome lethality of sedatives – Riker neutralized. Basically after this it goes crazy. Riker goes from one flying saucer to the other and back again all in his mind.

The next day while in the cafeteria, Riker refuses to talk with what he believes is a hallucination of Dr. Crusher, warning him that they are planning on rescuing him. That night, Worf and Data appear and free Riker, overwhelming the guards and returning him to the Enterprise. Riker, still defiant that the Enterprise is not real, complains of pain in his head; the same wound from before. Dr. Crusher cures it but it returns immediately, leading Riker to believe that this is another hallucination. He proves this to himself by firing a phaser at himself; the scene shatters, and he finds himself back in the asylum cell under the watchful eye of the doctors. He realizes he is still holding a phaser, though the doctors claim that it is knife. When the head pain strikes again, Riker dismisses this scene as reality, and sets the phaser to overload which would take half the facility with it. When it goes off, he finds himself on the stage of his play, the crowd giving a standing ovation. Riker refuses to accept this as real, and pounds on the wall of the set, shattering that reality.
Riker recovers consciousness to find himself on an operating table, a device inserted into his head where he has been experiencing pain. Riker frees himself from the table, renders an alien doctor unconscious, and recovers his communication badge on a nearby table, requesting an immediate beam-out. Riker shortly finds himself back safely aboard the Enterprise. As Dr. Crusher tends to his wounds, he learns that he was captured on the covert mission he was on, and the aliens were scanning his brain to discover strategic information about the Federation. The strange experiences he saw were a result of his own subconscious fighting against the probe. After recovering, Riker returns to the set of the play one last time to dismantle it.