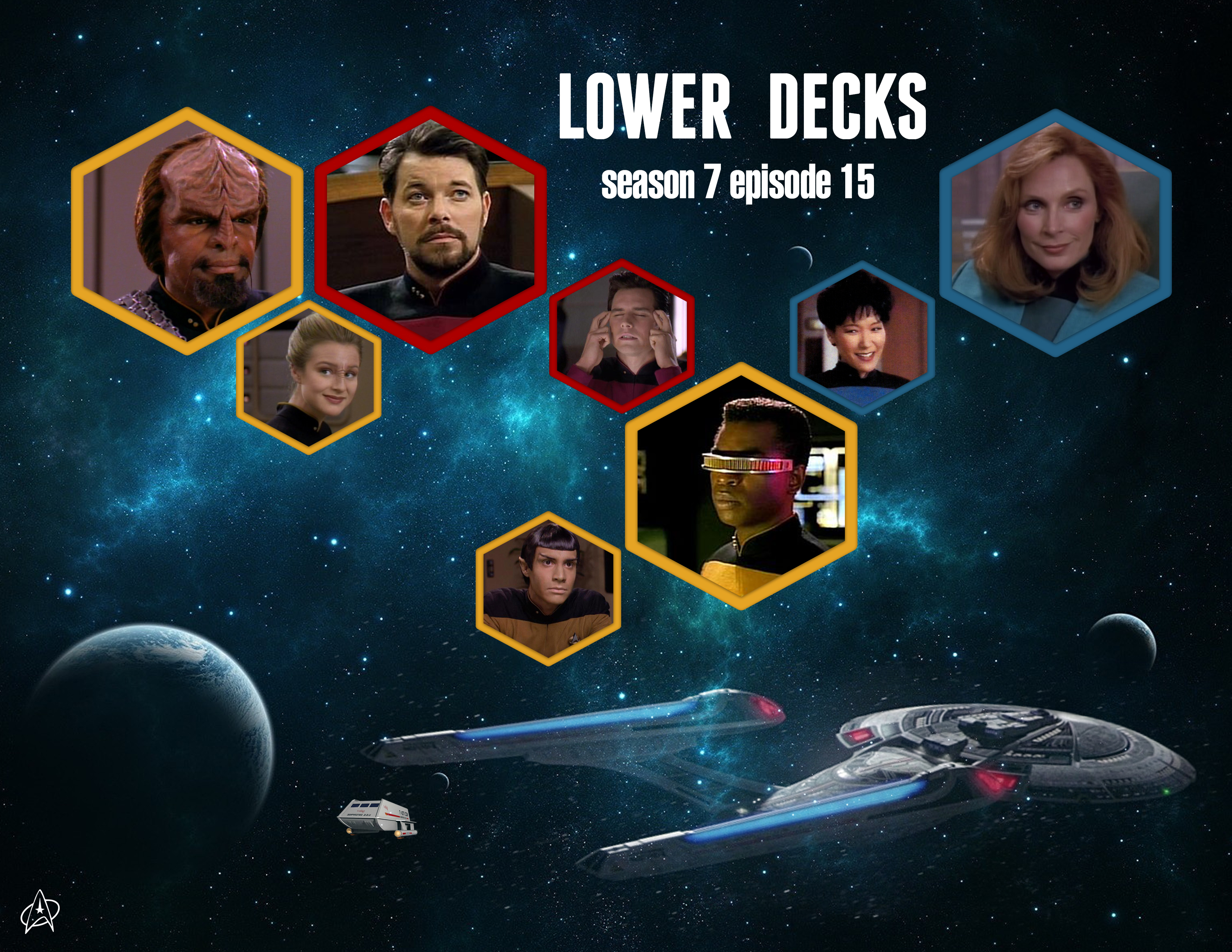 This episode was specially dedicated to the interns and juniors on the team:

Before getting into the overview/plot summary, I wanted to note the perspectives throughout the episode.  What was interesting about this episode was showing the different points  of view from various members of the crew; from the upper level deck members (Picard, Worf, Riker, Troi, Crusher) to the lower level deck crew (four junior officers: 2 humans, a Bojoran and Vulcan.)

While enduring the Enterprise‘s promotion evaluation process, four junior officers find themselves involved in a top-secret mission where they find their friendship strained during personnel evaluations.  Two of the friends, Sam Lavelle and a young Bajoran woman named Sito Jaxa discover that they are being considered for the same job. Joined by their pal Ben, a civilian who works as a waiter, they learn that promotions seem to be already decided on for their other two friends, Nurse Ogawa and the young Vulcan engineer Taurik.

Worf soon detects an escape pod inside Cardassian space, which is off limits to the Enterprise, and Geordi and Taurik work to transport the passenger on board, amidst a cloak of secrecy.

Ogawa seems to be doing nicely in the evaluations as Dr. Beverly Crusher has nothing but praise for her abilities and accomplishments. She orders Ogawa not to reveal what she is about to see in Sickbay, and Dr. Crusher takes her in to where an injured Cardassian has been brought on board.

Meanwhile, Commander Riker and Worf differ on whether Lavelle or Sito should be promoted. At one point, Captain Picard chastises Sito for her role in a Starfleet Academy scandal (depicted in the earlier episode “The First Duty“). She leaves the meeting exasperated, without having had the opportunity to defend herself.

Considerations of promotions are interrupted, however, by a baffling secret mission that all but Lavelle are involved in. Left out of the loop, Lavelle becomes convinced that this is a sign that he will not be promoted. After teaching a class, Worf tells Sito that he wants to test her. He blindfolds her and engages her in a one-on-one martial arts fight. Sito is powerless to stop Worf’s attacks and finally stands up to him, saying it’s an unfair test. Worf admits that getting her to stand up for herself when she is being judged unfairly is what he had intended all along. She then uses this newfound confidence to confront Picard about his earlier interrogation of her. Picard admits that the purpose of his earlier treatment of her was actually to assess her readiness for a dangerous secret mission where she will pose as a Bajoran captive taken by a Cardassian named Joret Dal. Joret is actually a Federation operative, and he needs to get back to Cardassia. The plan is for Joret and Sito to enter Cardassian space in a “stolen” Starfleet shuttle craft that has been made to look like it was damaged from phaser fire during an escape. At the first opportunity, Joret will launch Sito back to Federation space in an escape pod.

Sito’s escape pod does not return from the mission, so after waiting 32 hours, Picard orders a probe be launched into Cardassian space, despite being warned that doing so would be a treaty violation. The probe detects scattered debris that appears to be the remnants of a Starfleet shuttle escape pod. The Enterprise later intercepts Cardassian communications which report that a Bajoran prisoner overpowered her Cardassian captor and attempted to leave Cardassian space in an escape pod, which was then destroyed, leaving no survivors.

Captain Picard announces the loss of a fellow crew member over the ship’s general address. Lavelle receives the promotion, but he and his friends, as well as the senior crew, are downhearted. They all comfort each other, and Worf (at the prompting of the waiter Ben) joins them as the episode concludes. Even the emotionally-distant Worf has been affected by the loss they all feel.