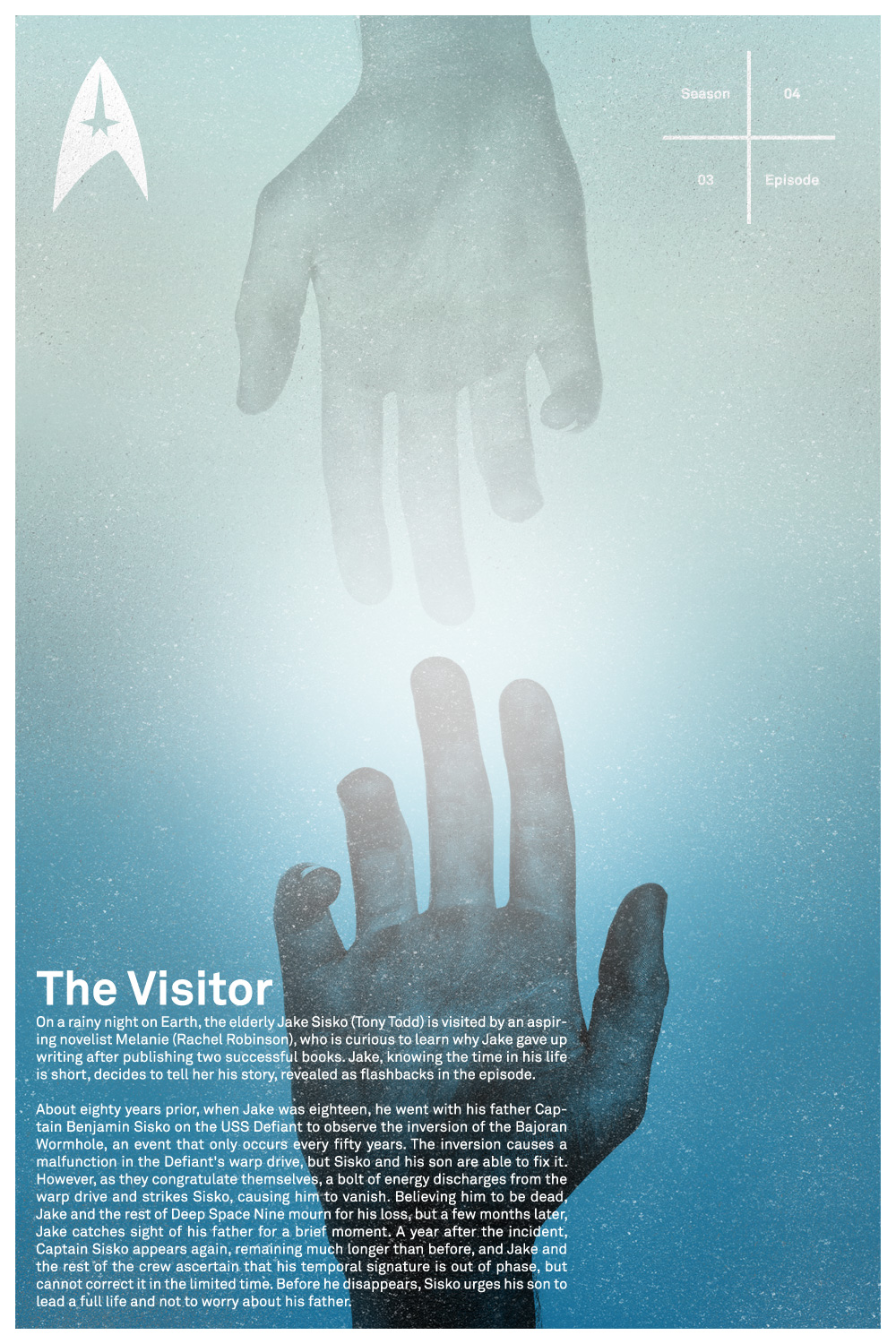 On a rainy night on Earth, the elderly Jake Sisko (Tony Todd) is visited by an aspiring novelist Melanie (Rachel Robinson), who is curious to learn why Jake gave up writing after publishing two successful books. Jake, knowing the time in his life is short, decides to tell her his story, revealed as flashbacks in the episode.

About eighty years prior, when Jake was eighteen, he went with his father Captain Benjamin Sisko on the USS Defiant to observe the inversion of the Bajoran Wormhole, an event that only occurs every fifty years. The inversion causes a malfunction in the Defiant‘s warp drive, but Sisko and his son are able to fix it. However, as they congratulate themselves, a bolt of energy discharges from the warp drive and strikes Sisko, causing him to vanish. Believing him to be dead, Jake and the rest of Deep Space Nine mourn for his loss, but a few months later, Jake catches sight of his father for a brief moment. A year after the incident, Captain Sisko appears again, remaining much longer than before, and Jake and the rest of the crew ascertain that his temporal signature is out of phase, but cannot correct it in the limited time. Before he disappears, Sisko urges his son to lead a full life and not to worry about his father.

Jake honors his father’s request, returning to Earth, becoming a writer and settling down in marriage. However, Sisko appears again to him in Jake’s home, and Jake decides to try to save his father, foregoing his life and relationships to study the cause. Fifty years after the incident, with the help of Dax, Bashir, and Nog (now a Captain in Starfleet), Jake attempts to recreate the events with the Defiant and the wormhole inversion. While Sisko successfully appears, both he and Jake shortly disappear as they hold each other. Jake finds himself with his father in a white void; Sisko is glad to see his son but begs him to give up on saving him and to live out his life. Jake returns to normality without his father, and vows to continue to search for a way to recover him.

On the night of Melanie’s visit, Jake knows his father will appear again, and has injected himself with a lethal hypospray dose, believing that he is acting as a tether that is keeping his father out of phase; by dying when Captain Sisko is present, Jake will allow his father to become unstuck and revert before the warp core incident. After seeing Melanie off, Jake waits for his father. Sisko appears as expected, and Jake explains everything to him, telling him that his death will give them both a “second chance”, and reminds him to dodge the energy discharge. Jake dies in Sisko’s arms; Sisko immediately finds himself back on the Defiant, and remembers elder Jake’s advice, pushing himself and his son out of the way of the energy discharge, erasing the future timeline. As they return home together, Sisko gains a greater appreciation for his son, knowing he would have given up his life for his father.