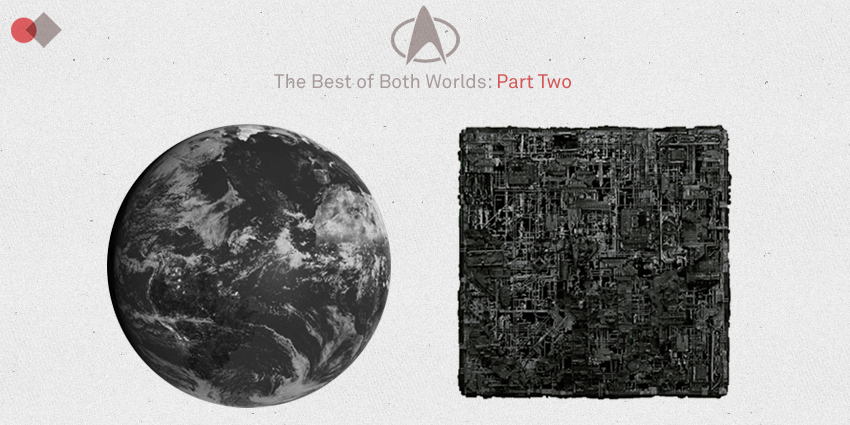 Title: The Best of Both Worlds: Part Two
Season: 4
Episode: 1

The deflector dish has no effect, with Locutus revealing that as he is in possession of Picard’s knowledge the Borg prepared for the attack. The Borg Cube continues at warp speed towards Earth, with the crippled Enterprise unable to follow. Upon reporting their failure to Hansom, Riker is promoted to Captain and advised a large fleet of starships is massing at Wolf 359 to stop the Borg. Learning via subspace communications that the battle is going badly, the Enterprise eventually arrives at Wolf 359 to find the fleet has been destroyed (including the Melbourne, which Riker was offered to command).

The Enterprise follows the cube’s warp trail, and offer to enter into negotiations with Locutus. The request is denied, but the communication reveals Locutus’ exact location on the Cube. The Enterprise locates the Borg cube, and as per a plan suggested by Shelby to Picard, separates into saucer and stardrive section respectively. Although Shelby suggested attacking with the stardrive section, Riker does the reverse and orders the saucer section to fire an anti-matter spread near the Cube, disrupting its sensors and allowing a shuttlecraft piloted by Data and Worf to pass the Borg shields and beam aboard the Borg cube. They successfully kidnap Locutus, although the Borg ignore this and continue to Earth, destroying all resistance.

Data and Dr. Crusher create a neural link with Locutus to gain access to the Borg’s collective consciousness. Data attempts to use the link to disable the Borg’s weapons and defensive systems, but discovers they are protected from external influence. With the Borg on the verge of invading Earth, Riker orders the Enterprise to ram the Borg cube, but Data asks him to wait. Picard breaks free from the Borg control and tells Data to “sleep.” Data issues a low-level, unprotected command to the Borg to enter sleep mode, causing their weapons and shields to deactivate. A feedback loop builds in the Borg cube which destroys the vessel. Dr. Crusher and Data are then able to successfully remove all Borg implants from Picard.

The Enterprise moves to an orbital shipyard for extensive repairs, and Riker, although offered command of his own ship, insists on remaining as the first officer. Shelby is reassigned to a task force dedicated to rebuilding the fleet. Picard recovers slowly but is still disturbed by his ordeal.