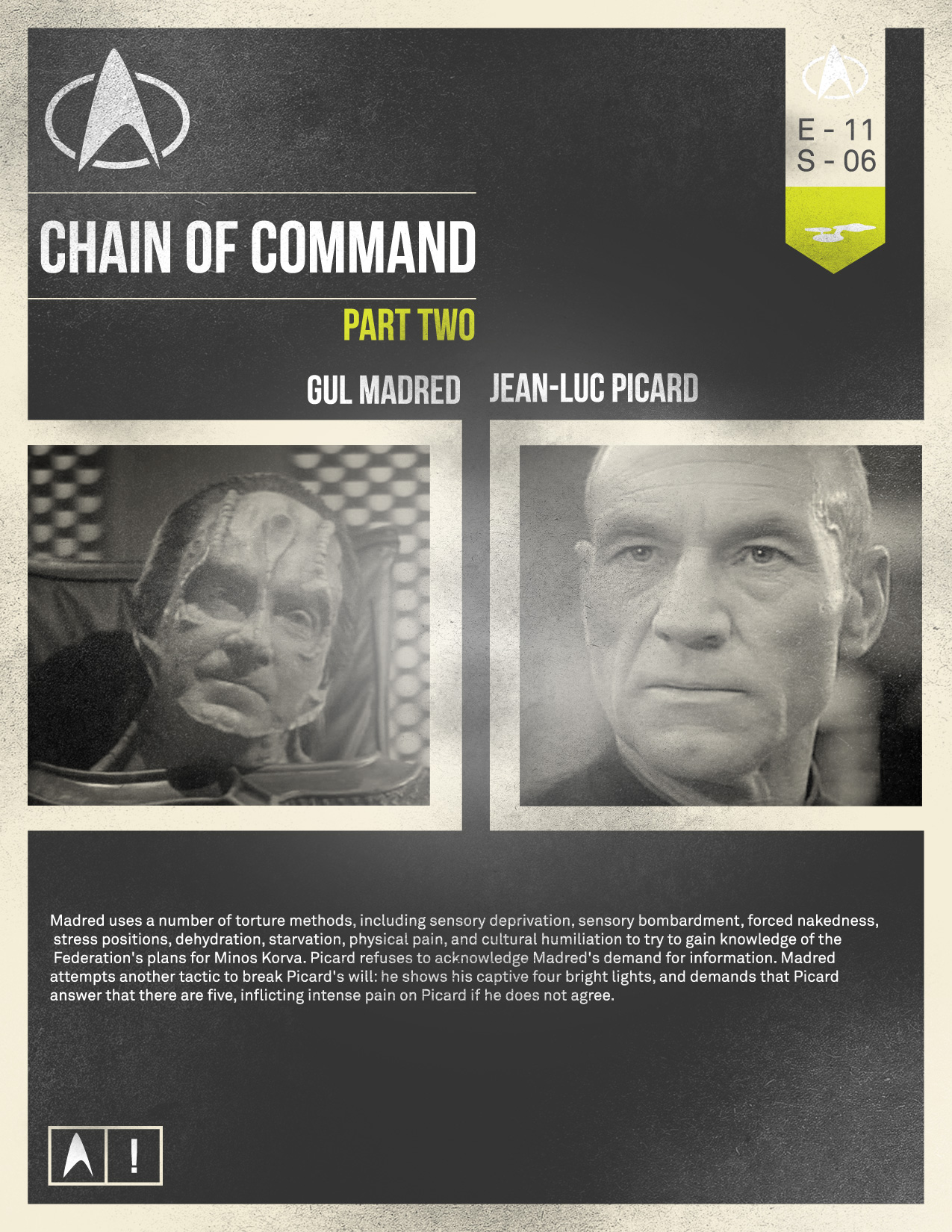 Madred uses a number of torture methods, including sensory deprivation, sensory bombardment, forced nakedness, stress positions, dehydration, starvation, physical pain, and cultural humiliation to try to gain knowledge of the Federation’s plans for Minos Korva. Picard refuses to acknowledge Madred’s demand for information. Madred attempts another tactic to break Picard’s will: he shows his captive four bright lights, and demands that Picard answer that there are five, inflicting intense pain on Picard if he does not agree.

Meanwhile, the Cardassians inform the Enterprise crew that Picard has been captured. Jellico refuses to acknowledge that Picard was on a Starfleet mission, an admission necessary for Picard to receive the rights of a prisoner of war rather than being subjected to torture as a terrorist; this leads to a heated argument between Jellico and Riker upon which Jellico relieves Riker of duty. The crew observes signs of residue from a nearby nebula on the hull of a Cardasian ship, and Jellico suspects a Cardassian fleet may attempt to use the cover of the nebula to launch an attack on Minos Korva. Jellico determines their best course of action is to mine the nebula using a shuttlecraft. However, Riker is the most qualified pilot for the mission. Riker candidly discusses Jellico’s command style with the officer, and only accepts the assignment once Jellico personally asks him to pilot the shuttle instead of ordering him to do so, a contrast to Jellico’s style. Riker successfully lays the minefield, and Jellico uses the threat of the minefield to force the Cardassians to disarm and retreat, also demanding Picard’s return.

With word of the failure of the Cardassians to secure Minos Korva, Madred attempts one last ploy to break Picard, to claim that Cardassia has taken the planet and the Enterprise was destroyed in the battle. He offers Picard a choice: to remain in captivity for the rest of his life, or live in paradise on Cardassia by admitting he sees five lights. As Picard momentarily considers the offer, a Cardassian officer interrupts the process and informs Madred that Picard must be returned now. As Picard is freed from his bonds and taken away, he turns back to Madred and defiantly shouts “there are four lights!” Picard is returned to the Federation and reinstated as Captain of the Enterprise. Picard admits privately to Counselor Troi that while he was willing to tell Madred anything, he was more concerned that, for a moment, he thought he really did see five lights.