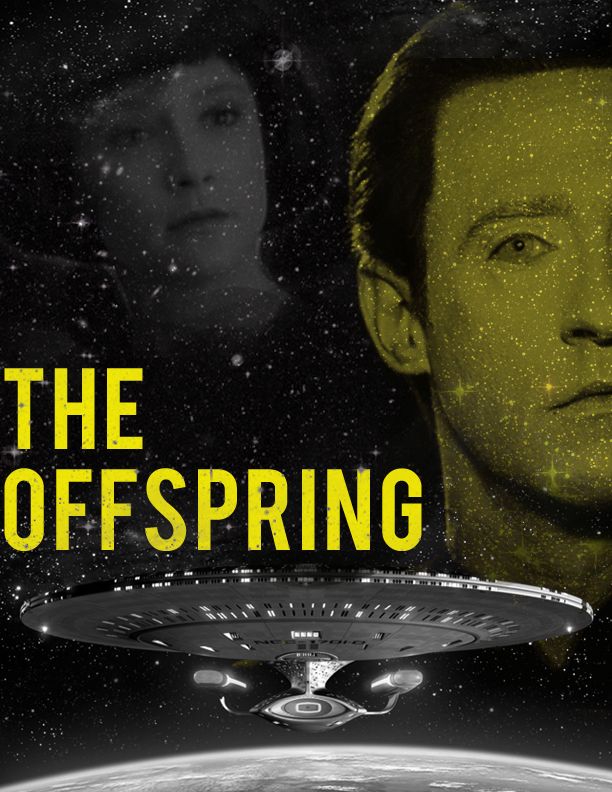 Data invites Troi, Wesley, and Geordi to his lab and surprises them by introducing a featureless humanoid android based on his own structural design and recent Federation cybernetics technology, describing it as his child. He names the android Lal, after the Hindi word for beloved and encourages it to select a gender and racial appearance. With Troi’s assistance, Lal selects the appearance of a young female human.

Data encourages Lal to interact with other members of the crew to learn behavioral and social customs, including working under Guinan’s care at Ten-Forward. This leads to some awkward moments, such as Lal misunderstanding the concept of flirting and suddenly kissing Commander Riker. Lal adapts quickly, even surpassing Data in her ability to use contractions.

Picard expresses concern to Data for constructing Lal in secrecy, but Data reminds him that he would not express such concern were two human crewmembers to decide to procreate. Nevertheless, Picard reports to Starfleet prompting Admiral Haftel to arrive to evaluate Lal. From the outset, Haftel is determined to transfer Lal to a Starfleet science facility. He interviews Lal, where she reveals her desire to remain on the Enterprise with her father, but Haftel is unmoved.

Upon leaving the meeting, Lal visits Troi in the counselor’s quarters. Lal is clearly confused, and reveals that she is experiencing fear. Troi recognizes that she can sense Lal’s newfound emotion. However, Lal soon stops speaking and wanders off, eventually returning to Data’s lab (as she is programmed to do in the event of a malfunction). In the meantime, Haftel meets with Data and orders him to release Lal into Starfleet’s custody. Though Data moves to comply, Picard orders him to stand fast and tells the Admiral that Data is a sentient lifeform with rights and cannot be ordered to turn his child over to the state. They are interrupted by a call from Troi who explains what has happened to Lal and asks everyone to come to Data’s lab at once.

They find Lal’s emotional outburst is a symptom of a cascade failure in her positronic brain, and they must work fast to stop it. Haftel offers to assist Data, who accepts. Some time later, Haftel leaves the lab and informs Troi, Wesley, and Geordi that they have failed. Visibly moved at Data’s determination to save his child, Haftel explains the failure was irreparable and that Lal will not survive for long. Data apologizes to Lal that he could not save her, but Lal thanks Data for her creation. She lets him know she loves him and will feel the emotion for both of them. Data returns to the bridge, and Picard conveys the crew’s condolences, but Data reveals that he has downloaded Lal’s memories into his own neural net, allowing Lal’s memories to live on.. via Wikipedia

I have brought a new life into this world. And it is my duty – not Starfleet’s – to guide her through these difficult steps to maturity. To support her as she learns. To prepare her to be a contributing member of society. No one can relieve me from that obligation. And I cannot ignore it. I am… her father.