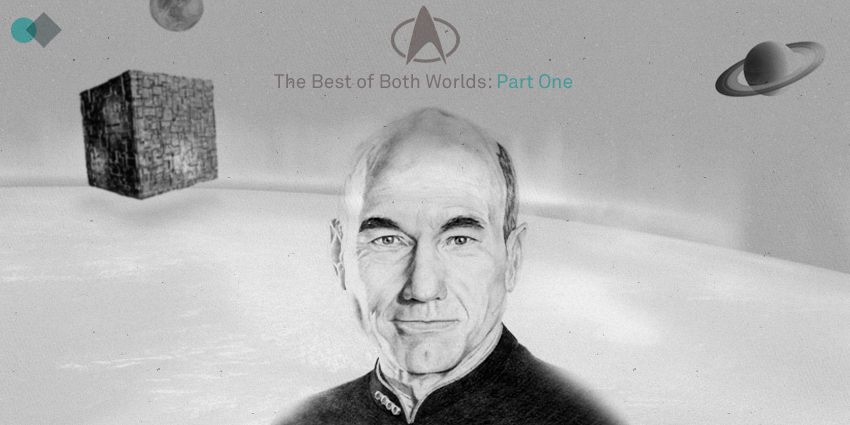 Title: The Best of Both Worlds: Part One
Season: 3
Episode: 26

The story occurs across stardates 43989.1 – 44001.4 (December 2366/January 2367 by the Okuda timeline). The Enterprise responds to a distress call from a Federation colony, but arrives to discover the colony gone, with only a crater remaining. Based on past knowledge of what happened to colonies along the Romulan Neutral Zone and on a deserted planet in System J-25, the Federation suspect Borg activity.

Admiral Hanson arrives with Lt. Commander Shelby, an expert on the Borg, who assists the crew in determining the cause of the colony’s disappearance. Hanson advises Captain Picard that Commander Riker has been offered the command of a starship for the third time, and advises that Riker take the position. Although there is tension between Riker and Shelby, who has designs on his position at first officer of the Enterprise, they confirm the colony was assimilated by the Borg. Hanson advises Picard that another Federation vessel encountered a strange “cube-like” vessel before sending a distress call that ended abruptly. The Enterprise moves to intercept and confronts a Borg Cube.

The Borg demand that Picard surrender himself, although he refuses. Although initially confused by the Enterprise’s shield modulation, the Borg lock the vessel in a tractor beam and begin cutting open the hull. Shelby suggests randomly changing the frequency of the ship’s phasers to prevent the Borg from adapting to the attack, which frees the vessel. The Enterprise escapes to a nearby nebula, with Geordi LaForge and Wesley Crusher adapting a technique suggested by Shelby to modify the deflector dish to fire a massive energy discharge capable of destroying the Borg cube. The Borg flushes the Enterprise from the nebula with magnetometric-guided charges, and then board the ship and abduct Picard. The Borg Cube moves off at high warp speed towards Earth, with the Enterprise in pursuit.

Riker, now in command of the ship, prepares to join an away team to transport to the Cube to rescue Picard, but Counselor Troi reminds him his place is now on the bridge. Shelby leads the away team onto the Borg cube, where they discover they are ignored. The team locate Picard’s uniform and communicator and then destroy power nodes inside the cube, forcing it out of warp. As the team prepares to transport to the Enterprise, they see an assimilated Picard. The Borg contact theEnterprise, with Picard stating he is now “Locutus of Borg”, and to prepare for assimilation. Riker orders the crew to fire the deflector dish.