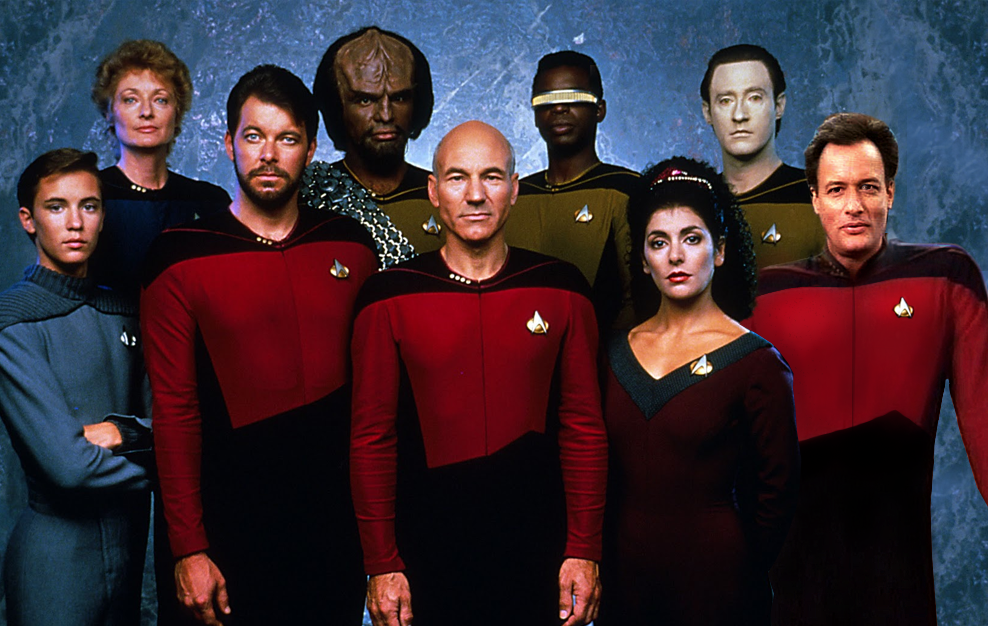 Q throws the Enterprise into uncharted space where it encounters and is engaged by a vessel of a previously unknown species: the Borg. When the vessel instantly and effortlessly overwhelms the Enterprise, Picard realizes that the Federation may not be as ready for the future as he thought.

Captain Picard, while checking up on the Enterprise crew, suddenly finds himself on a shuttlecraft with Q manning the controls. Picard refuses to converse with Q and demands return to the Enterprise. Q transports them both to Ten-Forward, surprising the rest of the crew. Guinan confronts Q who becomes agitated and is forced to reveal the reason why he is on the Enterprise—to join its crew to explore the galaxy. Picard rejects Q’s offer, even when Q asserts there are beings far more powerful than the Federation’s enemies. Irritated by Picard’s arrogance, Q sends the Enterprise light years across the galaxy to an unexplored region of space and then disappears. Lt. Commander Data reports that the nearest starbase is over 2 years away at maximum warp. An agitated Guinan warns Picard to set course for home immediately, but Picard is curious to explore the new area.

They discover a nearby planet stripped of all industrial and mechanical elements, similar to several outposts they had previously seen near the Romulan Neutral Zone (“The Neutral Zone”). They are soon met by a cube-shaped ship vastly larger than the Enterprise, but cannot make contact with its crew. Guinan warns Picard that the ship belongs to a cybernetic race called the Borg that her people had encountered a century earlier, leaving few survivors scattered throughout the galaxy, and again urges Picard to leave immediately. Though Picard orders shields raised, a single Borg is able to transport into Engineering and attempts to interface with the Enterprise computer systems. Lt. Worf and his security team quickly destroy the Borg but a second one infiltrates and now possesses a phaser-resistant shield. The second Borg completes its task and returns to its ship.

The Borg soon contact the Enterprise and demand their surrender. When Picard refuses, the Borg use an energy weapon to slice into the Enterprise’s saucer section, killing eighteen crew members. Picard orders return fire, and they appear to disable the Borg ship on the initial volley. Commander Riker takes an away team to the Borg cube to learn more about this new enemy. They find that the Borg, an amalgamation of numerous species and races, operate through a hive mind with no sense of individuality and are fitted with cybernetics at birth. When the crew finds that the Borg are still active but focusing their attention on the damage caused by the Enterprise, Picard orders the away team to return and sets a course for home at maximum warp. The Borg ship soon reactivates and pursues the Enterprise, outmatching its speed. Q appears on the bridge and warns Picard that the Borg will never stop pursuing the Enterprise. Picard admits his error in judgement and requests Q’s help. Q obliges, returning the Enterprise back to its last position in Federation space. Picard, though thankful for Q’s lesson, scathes Q for allowing members of his crew to die. Q disappears, but not before warning that the Federation should be prepared to handle threats like the Borg.

As the Enterprise returns to starbase to effect repairs, Guinan and Picard are sitting playing chess and discussing the events that have just happened. Guinan explains to Picard that in the future, perhaps mankind will be able to communicate and reason with the Borg, but for now will be seen as nothing more than raw materials. But Guinan warns Picard that now the Borg are aware of the Federation’s presence, they will definitely be coming. Picard contemplates that perhaps Q did the right thing for the wrong reasons by bringing forward their encounter with the Borg, as it has now prepared them for what lies elsewhere in the galaxy.

“Microbrain. Growl for me, let me know you still care.”

“To learn about you is, frankly, provocative. But you’re next of kin to chaos.”