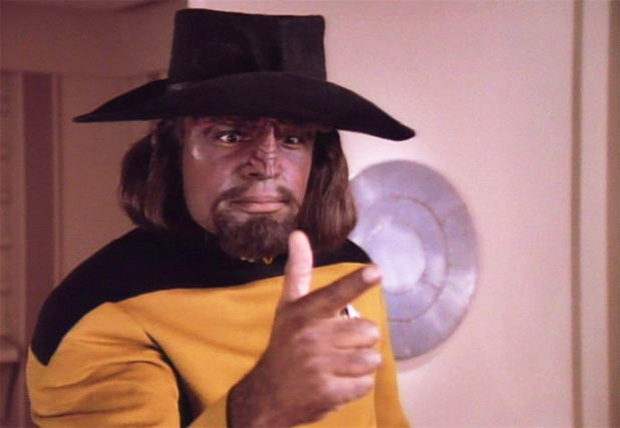 In this episode, Alexander convinces his father, Worf, to accompany him on a trip to the “Ancient West” on the holodeck. Worf reluctantly plays the part of sheriff in the town of Deadwood, S.D., circa 1870. Alexander is his deputy, and Troi(whose father was fond of tales of the Old West) enthusiastically plays ‘the mysterious stranger’, who is “in cahoots with the Sheriff, [and]…mighty mean with that Winchester”.

Meanwhile, Data and Geordi experiment with using Data’s brain as a backup for the Enterprise‘s computer. A seemingly small malfunction occurs. Soon, Data’s programming begins to take over parts of the Enterprise’s computer, replicating what is stored in his memory. Data’s poetry overwrites Crusher’s stage-play lines, Picard’s music is overwritten by Data’s, and a number of replicators can only produce Data’s customized cat food (intended for Spot).
In the holodeck, Worf has apprehended Eli Hollander—the “Butcher of Bozeman” who has “killed twenty-three men”—who, when placed behind bars, comments, “[when] my pa…comes to bust me outta this tin can, [the] gravedigger [will] be workin’ overtime”. Eli’s father, Frank, has come to rescue him from jail, saying to Eli, “[d]on’t you worry, son, Sheriff’s gonna pay.” Frank Hollander and his gang have kidnapped Alexander to use as bait. Frank also looks and sounds exactly like Data. At first Worf assumed that Data had been invited by Troi or Alexander to play the role of Frank, but it becomes apparent to Worf that something is seriously wrong when he (Worf) is shot and his arm is wounded by the holographic bullets. Worf and Troi have discovered that they cannot end the program, and that the holodeck’s safety features are not functioning. The holodeck is replacing all the characters with replicas of Data (hence the episode’s double entendre title) and Troi discovers that not only do the characters appear to look like Data, they also have Data’s strength, speed and reflexes. They realize, though, that if they can ride the story to its end, the program will terminate on its own. To that end, Worf and Troi make a deal with Frank: Eli will be exchanged for Alexander.
Worf thinks everything is settled, but Troi knows better—the outlaws are not concerned with honor, and will certainly try to kill them. They construct a personal deflector shield powered by a combadge and constructed from components of “[o]ld man Newsom’s telegraph machine” to protect Worf from the deadly holographic bullets. During the shootout, the outlaws are defeated, but the program does not end until Data, in the character of an enamored woman, “Miss Annie”, throws him/herself into Worf’s arms. Finally, the program ends, much to Worf’s relief.
Geordi determines the cause of the malfunctions aboard ship and fixes them. Data tells Riker: “[y]ou just sit tight, Commander. We’ll have [this all] fixed up in time for supper.”

Later, in their quarters, Alexander asks his father if he will ever want to visit Deadwood again, and smiles when Worf replies, “[t]he town of Deadwood may face danger again. If they do, they will need a sheriff… and a deputy.” After rendezvouing with the supply ship Biko, the Enterprise breaks orbit and heads off towards the sunset.

“What are his rights in this century? Is there a trial… or shall I execute him?“
– Worf