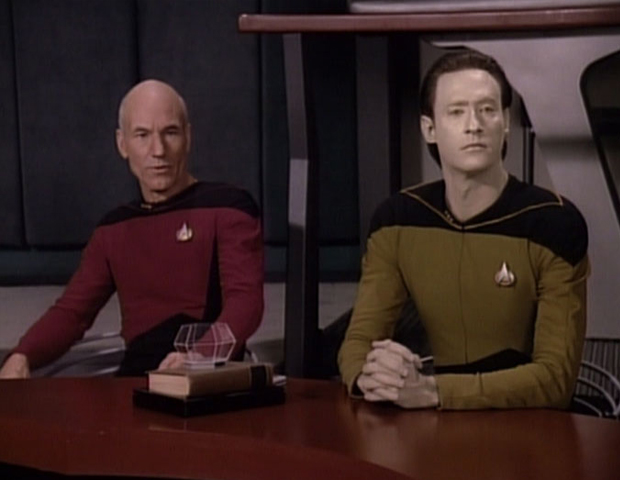 While the Enterprise is docked at Starbase 173 for routine maintenance, cyberneticist Commander Bruce Maddox pays Lieutenant Commander Data a visit, wishing to better understand how Data’s creator, Dr. Noonien Soong, was able to overcome certain problems in designing and constructing Data’s positronic brain. It quickly becomes clear that Maddox has an ulterior motive of storing Data’s positronic brain in the Starbase mainframe computer and shutting down and disassembling the android to learn how to recreate Soong’s technology (though Maddox promises to restore Data after the analysis is complete). Data, aware of the delicate nature of this procedure and to prevent damage to himself, refuses to succumb to Maddox’s desires, forcing Maddox to turn to Starfleet to order that Data submit himself to “experimental refit”. Captain Picard stands up for Data, while Data believes the only way to avoid the order is to resign from Starfleet. Maddox, however, points out that Data is the property of Starfleet and not a sentient being, and as such Starfleet need not permit him to resign.Picard requests Starfleet Judge Advocate General for the 23rd sector, Captain Philippa Louvois, to hold a hearing to determine Data’s legal status. Louvois agrees. However, as her office is understaffed at the moment, she drafts Commander Riker to represent Maddox’s interests, and the position that Data is the property of Starfleet and therefore without the broad array of human rights accorded in the United Federation of Planets, and Picard to represent Data’s interests, that Data is a sentient being with the choice to resign from Starfleet and to refuse to undergo Maddox’s procedures. Riker, forced to prosecute against Data to prevent a summary ruling against him (to ensure the issue is accorded due process of law), enters the same argument Maddox had made years before, where Maddox was the sole dissenting vote as to Data’s petition to attend Starfleet Academy and pursue a Starfleet commission.
Picard initially finds Riker’s prosecution difficult to challenge. However, during a recess, Picard talks to Guinan who suggests that regardless of whether Data is a machine or not, Maddox’s goal is tantamount to sanctioning slavery. Picard uses this to defuse Riker’s arguments when the court reconvenes. The discussion of Data’s sentience turns to metaphysical matters. Picard points out that Data meets two of the three criteria that Maddox uses to define sentient life. Data is intelligent and self-aware, but Picard asks anyone in the court to show a means of measuring consciousness. With no one able to answer this, Louvois acknowledges that neither she nor anyone else can measure this in Data (nor in any other person present) and, as such, Data, as a matter of law, is a sentient being. She therefore rules that Data has the right to choose. Upon the court’s ruling, Data formally refuses to undergo the procedure. via Wikipedia

“Your Honor, a courtroom is a crucible; in it we burn away irrelevancies until we are left with a pure product: the truth, for all time.”
– Jean-Luc Picard

“It’s been ten years, but seeing you again like this makes it seem like fifty. If we weren’t around all these people, do you know what I would like to do?”
“Bust a chair across my teeth.”
“After that.”
“Oh, ain’t love wonderful.”
– Jean-Luc Picard and Phillpa Louvois