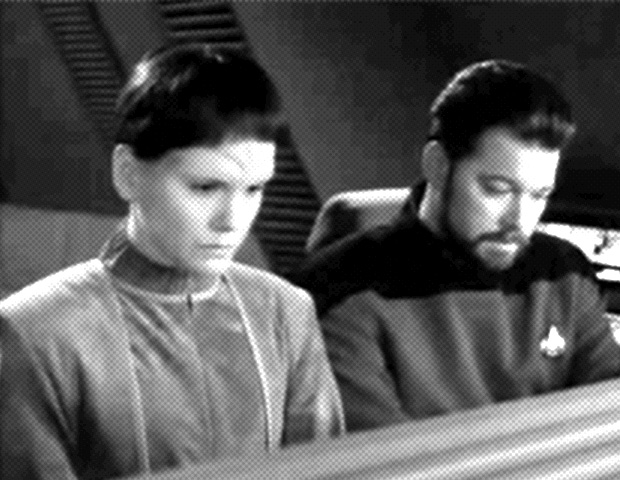 The Enterprise is contacted by a humanoid race called the J’naii who ask the crew for help in finding a shuttle that has gone missing. It is theorized that the shuttle disappeared into a pocket of null space. This is a pocket of space which drains energy very quickly. In short order, a rescue mission is planned, Riker volunteers to pilot a shuttle and retrieve the shuttle crew. A member of the J’naii named Soren insists on accompanying Riker and act as co-pilot. Soren proves to be a good pilot. While the pair is charting the null space, the shuttle is damaged and Soren is injured. While being treated by Dr. Crusher, Soren asks her several questions about female gender identification. After this, Riker and Soren share a meal and become more comfortable with each other. They are interrupted by another Janii and Soren leaves quickly. While Soren and Riker work on the shuttle, Soren confesses that she is attracted to Riker and further that she has female gender identity. Soren explains that the J’naii are an androgynous species that view the expression of any sort of male or female gender, and especially sexual liaisons, as a sexual perversion. According to their official doctrine, the J’naii had evolved beyond gender and thus view the idea of male/female sexuality as primitive. Those among the J’naii who view themselves as possessing gender are ridiculed, outcast, and forced to undergo “psychotectic therapy”[2] – a psychological treatment to remediate gender-specificity and allow acceptance back into J’naii society. The affair between Riker and Soren grows and eventually is discovered. Soren is essentially put on trial where she passionately defends herself and expresses her outrage at what their society does to those who are different. Riker barges in and tries to take the blame for the situation but without success. J’naii diplomats force Soren to undergo this therapy. Riker’s emotions and love for Soren grow and he decides that he cannot leave Soren to this fate and tries to explain the situation to Picard who is sympathetic to Riker, but says that he cannot sanction a rescue mission as it violates the Prime Directive as well as the fact that Riker would be throwing away his career. Worf visits Riker in his quarters and offers to go with him to rescue Soren because he is unwilling to let Riker face the task alone. When Riker and Worf beam down to the planet to rescue Soren, he realizes that the therapy has already been performed. Soren refuses to go with him, claiming to be happy now, and was sick during the affair with Riker. Soren apologizes to Riker for feeling love toward him. Riker remains unconvinced of the righteousness of the procedure. via Wikipedia


This episode was intended to address the contemporary issue of LGBT-rights. Jonathan Frakes (William Riker) commented that the episode wasn’t “gutsy” enough and that “Soren should have been more evidently male”

“The idea of gender – it is offensive to my people. You see, long ago, we had two sexes, as you do. But we evolved into a higher form. I don’t mean to sound insulting; but on my planet, we have been taught that gender is… primitive.”
” ‘Primitive’ ?”
“Less evolved.”
“Maybe so. But sometimes, there’s a lot to be said for an experience that’s ‘primitive’.”
– Soren and William Riker

“Doctor? You are female.”
“Yes.”
“Forgive me, I do not mean to be rude. But I’m curious. What is it like?”
“Well, it’s… it’s just the way I am. I’ve never really thought about what it’s like.”
“I notice you tend to have longer hair, and you arrange it more elaborately. And you apply color to your bodies.”
“Color?”
“You put color on your mouths. And your eyes, your cheeks and… your fingernails. The men don’t.”
“That’s true.”
“Then it is up to women to attract the men?”
“Oh, no. Men want to be attractive too, believe me; they just go about it differently.”
“No color.””
No color. They like to pretend they’re not doing anything to attract a woman, even when it’s the most important thing on their minds.”
– Soren and Beverly Crusher

“Commander, tell me about your sexual organs.”
“Uhhh…”
– Soren and Riker, while in the shuttle