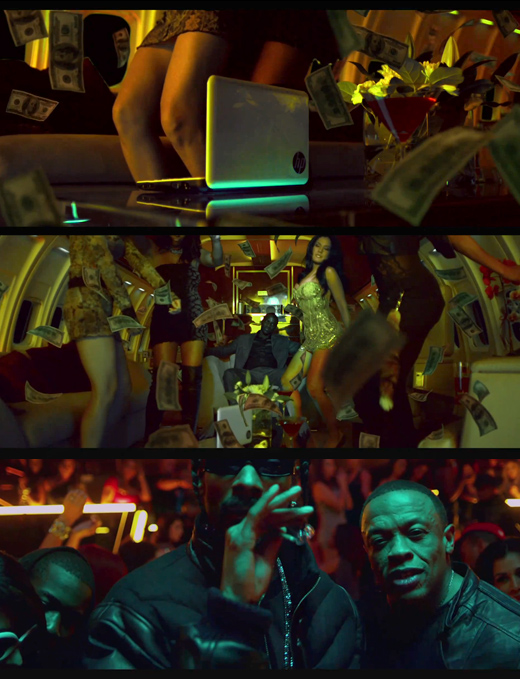 You know what I’m tired of? Companies starting their product’s/brand’s name with the lower case ‘i’. No seriously. Stop it.

First off, you’re not taking away market share from Apple, just strengthening their brand. Secondly, just because you may not be in the computer, tech, smart-phone, or music player device business, doesn’t mean you’re allowed to steal Apple’s ‘i’ idea. It’s not cool – it’s tacky.

Anyways, this article was supposed to be a tribute to HP, not an iBashing.

Kudos to you, HP. You seem to be the only computer company outside of Apple willing to rock the boat in terms of your marketing and advertising.Apple had Feist in their iPod commercial singing 1, 2, 3, 4. Who cares? Your laptop is surrounded by sexy booties in short skirts, martinis, flying money, in a private jet flying around the Cali skyline, in a music video by Dr Dre, Snoop Dogg and Akon. Now that’s grimy (street slang for ‘well executed + targeted campaign‘).

Partnering up with Dr Dre was a bold move. Let’s be honest: Dre is not the top choice of friendly spokes-people for most brands. Lest we forget, he was an original member of NWA (Ni&&@z Wit Attitude), notorious for enjoying his Kush strain cannabis, and of course, known to produce the infamous song, “Fuck Da Police“. Not really consistent with Apple’s iBrand. < – Insert smiley face.

I only suspect that this joint venture relationship between HP and Dre will continue to be profitable for many years, creating a special spotlight for both parties to share, impenetrable by Apple. I’ve said it not once but hundreds of times. Why bother trying to steal Apple’s small global market-share when you can create your own?